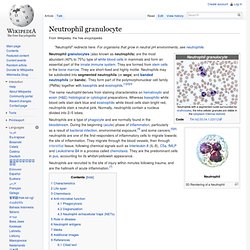 They are formed from stem cells in the bone marrow. They are short-lived and highly motile. Neutrophils may be subdivided into segmented neutrophils (or segs) and banded neutrophils (or bands). They form part of the polymorphonuclear cell family (PMNs) together with basophils and eosinophils.[1][2][3] The name neutrophil derives from staining characteristics on hematoxylin and eosin (H&E) histological or cytological preparations. 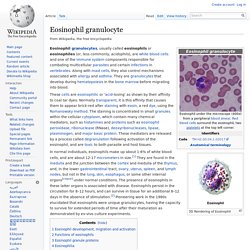 Along with mast cells, they also control mechanisms associated with allergy and asthma. They are granulocytes that develop during hematopoiesis in the bone marrow before migrating into blood. Eosinophil development, migration and activation[edit] Basophil granulocyte. 3D Rendering of a Basophil Granulocyte Basophil granulocytes, mostly referred to as basophils, are the least common of the granulocytes, representing about 0.01% to 0.3% of circulating white blood cells[citation needed]. 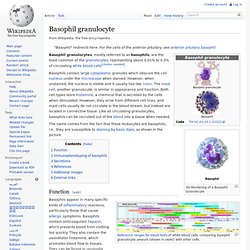 Basophils contain large cytoplasmic granules which obscure the cell nucleus under the microscope when stained. However, when unstained, the nucleus is visible and it usually has two lobes. The mast cell, another granulocyte, is similar in appearance and function. Both cell types store histamine, a chemical that is secreted by the cells when stimulated. Function[edit] Basophils appear in many specific kinds of inflammatory reactions, particularly those that cause allergic symptoms. Mast cell. The mast cell is very similar in both appearance and function to the basophil, a type of white blood cell. 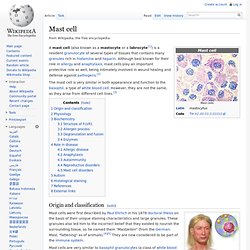 However, they are not the same, as they arise from different cell lines.[3] Origin and classification[edit] Illustration depicting mast cell activation and anaphylaxis. Lymphocyte. A lymphocyte is any of 3 types of white blood cell in a vertebrate's immune system. 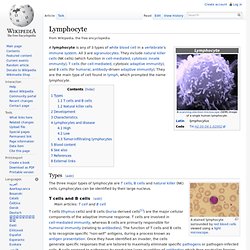 All 3 are agranulocytes. T cell. Histiocyte. Terminology[edit] Histiocytes are derived from the bone marrow by multiplication from a stem cell. 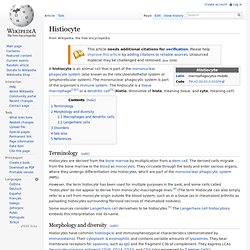 The derived cells migrate from the bone marrow to the blood as monocytes. They circulate through the body and enter various organs, where they undergo differentiation into histiocytes, which are part of the mononuclear phagocytic system (MPS). However, the term histiocyte has been used for multiple purposes in the past, and some cells called "histocytes" do not appear to derive from monocytic-macrophage lines.[4] (The term Histiocyte can also simply refer to a cell from monocyte origin outside the blood system, such as in a tissue (as in rheumatoid arthritis as palisading histiocytes surrounding fibrinoid necrosis of rheumatoid nodules).

Some sources consider Langerhans cell derivatives to be histiocytes.[5] The Langerhans cell histiocytosis embeds this interpretation into its name. Morphology and diversity[edit] Dendritic cell. Dendritic cells (DCs) are antigen-presenting cells, (also known as accessory cells) of the mammalian immune system. 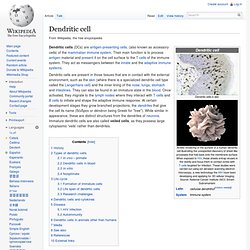 Their main function is to process antigen material and present it on the cell surface to the T cells of the immune system. They act as messengers between the innate and the adaptive immune systems. History[edit] Dendritic cells were first described by Paul Langerhans (hence "Langerhans cells") in the late nineteenth century. The term "dendritic cells" was coined in 1973 by Ralph M.

Types of dendritic cells[edit] As in all dendritic cells, their particular morphology results in a very large contact surface to their surroundings compared to overall cell volume. Monocyte. 3D Rendering of a Monocyte Monocytes are a type of white blood cells (leukocytes). 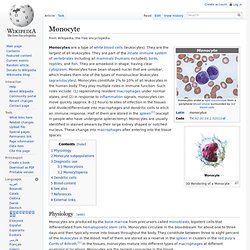 They are the largest of all leukocytes. They are part of the innate immune system of vertebrates including all mammals (humans included), birds, reptiles, and fish. They are amoeboid in shape, having clear cytoplasm. Stem cell. There are three accessible sources of autologous adult stem cells in humans: Bone marrow, which requires extraction by harvesting, that is, drilling into bone (typically the femur or iliac crest),Adipose tissue (lipid cells), which requires extraction by liposuction, andBlood, which requires extraction through apheresis, wherein blood is drawn from the donor (similar to a blood donation), and passed through a machine that extracts the stem cells and returns other portions of the blood to the donor. 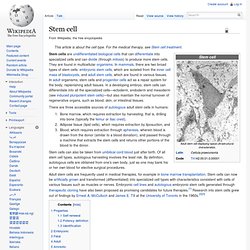 Stem cells can also be taken from umbilical cord blood just after birth. Of all stem cell types, autologous harvesting involves the least risk. By definition, autologous cells are obtained from one's own body, just as one may bank his or her own blood for elective surgical procedures. Adult stem cells are frequently used in medical therapies, for example in bone marrow transplantation. Properties. Phagocyte. During an infection, chemical signals attract phagocytes to places where the pathogen has invaded the body. 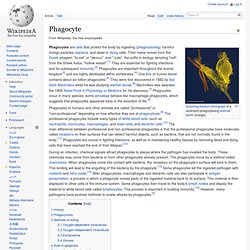 In the immune system, phagocytosis is a major mechanism used to remove pathogens and cell debris. For example, when a macrophage ingests a pathogenic microorganism, the pathogen becomes trapped in a phagosome which then fuses with a lysosome to form a phagolysosome. In immune system[edit] Phagocytosis in mammalian immune cells is activated by attachment to Pathogen-associated molecular patterns (PAMPS), which leads to NF-κB activation. Engulfment of material is facilitated by the actin-myosin contractile system. Degradation can be oxygen-dependent or oxygen-independent. Oxygen-dependent degradation depends on NADPH and the production of reactive oxygen species.