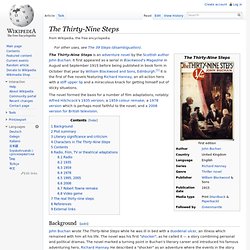 It first appeared as a serial in Blackwood's Magazine in August and September 1915 before being published in book form in October that year by William Blackwood and Sons, Edinburgh.[1] It is the first of five novels featuring Richard Hannay, an all-action hero with a stiff upper lip and a miraculous knack for getting himself out of sticky situations. Background[edit] John Buchan wrote The Thirty-Nine Steps while he was ill in bed with a duodenal ulcer, an illness which remained with him all his life. The novel was his first "shocker", as he called it — a story combining personal and political dramas. The novel marked a turning point in Buchan’s literary career and introduced his famous adventuring hero, Richard Hannay. Plot summary[edit] The novel is set during May and June 1914; Europe is close to war and spies are everywhere. On his way, Hannay reflects on what he has learnt from Scudder's notes. 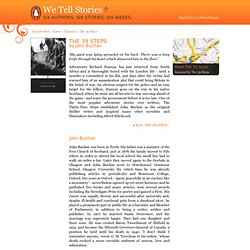 There was a long knife through his heart which skewered him to the floor.' Adventurer Richard Hannay has just returned from South Africa and is thoroughly bored with his London life - until a murder is committed in his flat, just days after the victim had warned him of an assassination plot that could bring Britain to the brink of war. The 39 Steps - Official Site: John Buchan. John Buchan (1875-1940) - First Baron Tweedsmuir of Enfield Scottish diplomat, barrister, journalist, historian, poet, and novelist, whose most famous thriller was The Thirty Nine Steps (1915), his 27th book. 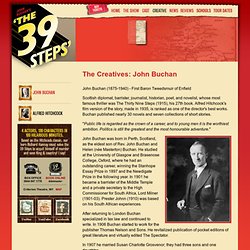 Alfred Hitchcock's film version of the story, made in 1935, is ranked as one of the director's best works. Buchan published nearly 30 novels and seven collections of short stories. John Buchan and The Thirty-Nine Steps. Buchan, John. 1915. The Thirty-nine Steps. The 39 Steps: on PC, Mac and Linux! Secrets of The 39 Steps: Part One « The Story Mechanics. With less than 2 months now before everyone can get their hands on a copy of our digital adaptation of The Thirty Nine Steps, we wanted to let you in on a few of the secrets about the product, the book and the new format that we’re bringing to market. 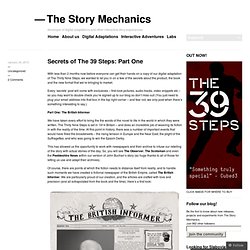 Every ‘secrets’ post will come with exclusives – first-look pictures, audio-tracks, video snippets etc – so you may want to double check you’re signed up to our blog so don’t miss out! (You just need to plug your email address into that box in the top right corner – and fear not, we only post when there’s something interesting to say.) Secrets of The 39 Steps: Part 2 « The Story Mechanics. Continuing on with our secrets series, in this post we will reveal our approach to character stories in The Thirty Nine Steps; something we call Recalls. 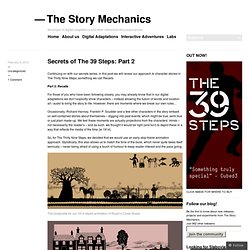 Part 2: Recalls For those of you who have been following closely, you may already know that in our digital adaptations we don’t explicitly show characters – instead allowing the fusion of words and location art / audio to bring the story to life. However, there are moments where we break our own rules… Occasionally, Richard Hannay, Franklin P. Scudder and a few other characters in the story embark on self-contained stories about themselves – digging into past events, which might be true, semi-true or just plain made-up. Secrets of The 39 Steps: part 3 « The Story Mechanics. Onwards to part 3 of our secrets of… series. 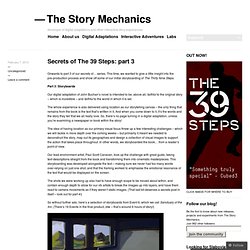 This time, we wanted to give a little insight into the pre-production process and show off some of our initial storyboarding of The Thirty Nine Steps. Part 3: Storyboards Our digital adaptation of John Buchan’s novel is intended to be, above all, faithful to the original story – which is incredible – and faithful to the world in which it is set. The whole experience is also delivered using location as our storytelling canvas – the only thing that remains from the book is the text that’s written in it. And when you come down to it, it’s the words and the story they tell that we all really love. The idea of having location as our primary visual focus threw up a few interesting challenges – which we will tackle in more depth over the coming weeks – but primarily it meant we needed to deconstruct the story, map out its geographies and design a collection of visual images to support the action that takes place throughout. 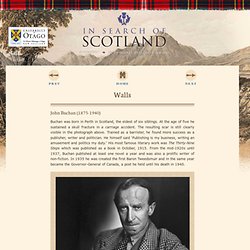 At the age of five he sustained a skull fracture in a carriage accident. The resulting scar is still clearly visible in the photograph above. Trained as a barrister, he found more success as a publisher, writer and politician. He himself said ‘Publishing is my business, writing an amusement and politics my duty.’ John Galt (1779-1839) Born in Irvine on the west coast of Scotland, Galt was a sickly child who stayed at home and despite his mother’s protestations, developed ‘bookish propensities’. Dame Muriel Spark (1918-2006) Muriel Sarah Camberg was born in Edinburgh, her father a Scottish Jew and her mother a Christian. Val McDermid Born in 1955, Val McDermid grew up in Kirkcaldy in Fife which is about 11 miles north of Edinburgh, as the crow flies, across the Firth of Forth. McDermid also reviews for various British newspapers and writes for broadcast on BBC Radio 4 and BBC Radio Scotland. 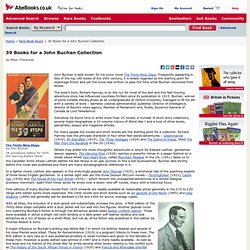 Frequently appearing in lists of the top 100 books of the 20th century, it is widely regarded as the starting point for espionage fiction and yet the novel was written to pass the time while Buchan recovered from illness. The book’s hero, Richard Hannay, is on the run for most of the plot and this fast-moving adventure story has influenced countless thrillers since its publication in 1915. Buchan, winner of some notable literary prizes as an undergraduate at Oxford University, managed to fill his life with a variety of work – barrister, colonial administrator, publisher, Director of Intelligence, director of Reuters news agency, Member of Parliament and, finally, Governor-General of Canada as Lord Tweedsmuir. For many people the novels and short stories are the starting point for a collection. 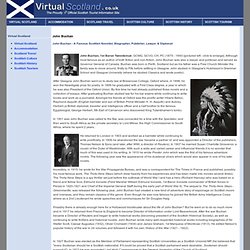 Although most famous as an author of both fiction and non-fiction, John Buchan was also a lawyer and politician and served as Governor General of Canada. Buchan was born in Perth, Scotland but as his father was a Free Church Minister the family was to move around, firstly to Fife before settling in Glasgow. John studied in Glasgow's Hutcheson's Grammar School and Glasgow University (where he studied Classics and wrote poetry).

After Glasgow John Buchan went on to study law at Brasenose College, Oxford where, in 1898, he won the Newdigate prize for poetry. In 1899 he graduated with a First Class degree, a year in which he was also President of the Oxford Union.