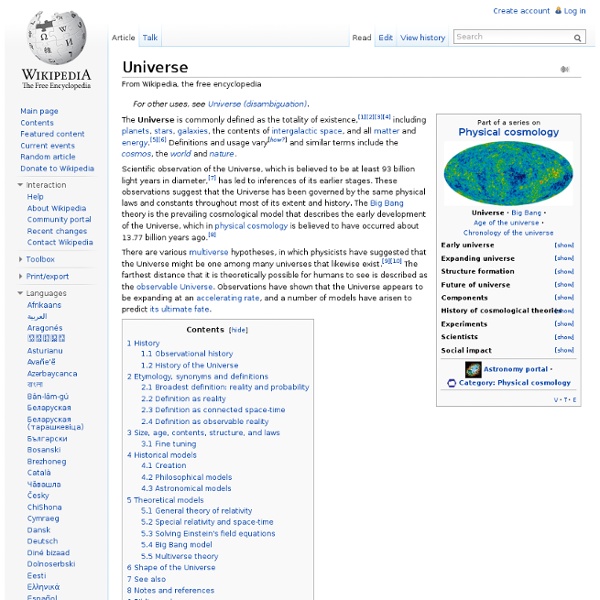 There are many competing theories about the ultimate fate of the universe. Physicists remain unsure about what, if anything, preceded the Big Bang. Many refuse to speculate, doubting that any information from any such prior state could ever be accessible. There are various multiverse hypotheses, in which some physicists have suggested that the Universe might be one among many or even an infinite number of universes that likewise exist.[11][12] Historical observation XDF size compared to the size of the Moon – several thousand galaxies, each consisting of billions of stars, are in this small view. XDF (2012) view – each light speck is a galaxy – some of these are as old as 13.2 billion years[13] – the visible Universe is estimated to contain 200 billion galaxies. XDF image shows fully mature galaxies in the foreground plane – nearly mature galaxies from 5 to 9 billion years ago – protogalaxies, blazing with young stars, beyond 9 billion years. History Etymology, synonyms and definitions

Asteroid impact avoidance Artist's impression of a major impact event. The collision between Earth and an asteroid a few kilometres in diameter releases as much energy as the simultaneous detonation of several million nuclear bombs. Asteroid impact avoidance comprises a number of methods by which near-Earth objects (NEO) could be diverted, preventing destructive impact events. A sufficiently large impact by an asteroid or other NEOs would cause, depending on its impact location, massive tsunamis, multiple firestorms and an impact winter caused by the sunlight blocking effect of placing large quantities of pulverized rock dust into the stratosphere. Massive impacts may also cause volcanic mantle pluming at the antipodal point.[1] This volcanism, if energetic enough, could compound the effects of the impact by creating a volcanic winter, irrespective of the other impact effects.

Satellite galaxy A satellite galaxy is a galaxy that orbits a larger galaxy due to gravitational attraction.[1] Although a galaxy is made of a large number of objects (such as stars, planets, and nebulae) that are not connected to each other, it has a center of mass, which represents a weighted average (by mass) of the positions of each component object. This is similar to how an everyday object has a center of mass which is the weighted average of the positions of all its component atoms.[1] Galaxies which encounter one another from certain directions may interact: collide, merge, rip each other apart, or transfer some member objects. Science Friday: Rockets, Planets, Stars & Bears…oh my by Kayla Iacovino , Filed under: Science/Technology , trackback Welcome back to Science Friday! I missed you all so much last week. So, to make up for it, this week we’ve got a double dose of awesome. Discover 32 new exoplanets, go or no-go for NASA’s new rocket, save the polar bears, and help redefine the shape of our solar system.

Nebula Portion of the Carina nebula A nebula (from Latin: "cloud";[1] pl. nebulae or nebulæ, with ligature, or nebulas) is an interstellar cloud of dust, hydrogen, helium and other ionized gases. Originally, nebula was a name for any diffuse astronomical object, including galaxies beyond the Milky Way. The Andromeda Galaxy, for instance, was referred to as the Andromeda Nebula (and spiral galaxies in general as "spiral nebulae") before the true nature of galaxies was confirmed in the early 20th century by Vesto Slipher, Edwin Hubble and others. Nebulae are often star-forming regions, such as in the Eagle Nebula. This nebula is depicted in one of NASA's most famous images, the "Pillars of Creation".

Cosmos Cosmos is the Universe regarded as an ordered system.[1] The philosopher Pythagoras is regarded as the first person to apply the term cosmos (Greek κόσμος) to the order of the Universe.[2] Cosmology[edit] Cosmology is the study of the cosmos in several of the above meanings, depending on context. All cosmologies have in common an attempt to understand the implicit order within the whole of being.

Andromeda–Milky Way collision The Andromeda–Milky Way collision is a galaxy collision predicted to occur in about 4 billion years between the two largest galaxies in the Local Group—the Milky Way (which contains our Solar System and Earth) and the Andromeda Galaxy.,[1][2][3] although the stars involved are sufficiently far apart that it is improbable that many of them will individually collide.[4] Stellar collisions[edit] While the Andromeda Galaxy contains about 1 trillion (1012) stars and the Milky Way contains about 300 billion (3×1011), the chance of even two stars colliding is negligible because of the huge distances between the stars. Through the Wormhole: How Does the Universe Work? With the help of massive machines called particle accelerators, scientists studied the subatomic realm and made discoveries about the forces that operate at that level. But the search for a comprehensive explanation still continues. In particular, physicists have sought to find a way to reconcile Einstein's model of space-time, which seems to work best when applied to big objects like stars and galaxies, and the theory of quantum mechanics, which offers an explanation of electromagnetic and nuclear forces that makes sense of reality at the tiniest level. In recent years, some have proposed a novel solution called string theory, in which tiny particles are loops that vibrate like violin strings in a multidimensional space. In the mathematical calculations that make up string theory, gravitation is a byproduct of the process. Watch the full documentary now

Virgo The Virgo Supercluster (Virgo SC) or Local Supercluster (LSC or LS) is the irregular supercluster that contains the Virgo Cluster in addition to the Local Group, which in turn contains the Milky Way and Andromeda galaxies. At least 100 galaxy groups and clusters are located within its diameter of 33 megaparsecs (110 million light-years). It is one of millions of superclusters in the observable universe.

Diamagnetic Gravity Vortexes Diamagnetic Gravity Vortexes by Richard LeFors Clark Waves of gravity pour from an extraordinary (and imaginary) cosmic accident —a head-on collision of two black holes approaching from left and right. Amateur astronomy Amateur astronomers watch the night sky during the Perseid meteor shower. Amateur astronomy is a hobby whose participants enjoy watching the sky, and the abundance of objects found in it with the unaided eye, binoculars, or telescopes. Even though scientific research is not their main goal, many amateur astronomers make a contribution to astronomy by monitoring variable stars, tracking asteroids and discovering transient objects, such as comets and novae. The typical amateur astronomer is one who does not depend on the field of astronomy as a primary source of income or support, and does not have a professional degree or advanced academic training in the subject. Many amateurs are beginners or hobbyists, while others have a high degree of experience in astronomy and often assist and work alongside professional astronomers. People have studied the sky throughout history in an amateur framework, without any formal method of funding.

Draco Dwarf Characteristics[edit] Paul W. Hodge analyzed the distribution of its stars in 1964 and concluded that its ellipticity was 0.29 ± 0.04.[6] Recent studies have indicated that the galaxy may potentially hold large amounts of dark matter.[7] Having an absolute magnitude of -8.6[c] and a total luminosity of only 2×105 L☉, it is one of the faintest companions to our Milky Way.[4] Draco Dwarf contains many red giant branch (RGB) stars; five carbon stars have been identified in Draco Dwarf and four likely asymptotic giant branch (AGB) stars have been detected.[4] The Draco Dwarf is estimated to be about 80 ± 10 kpc[2][3] from earth and span a distance of 830 ± 100 × 570 ± 70 pc.[d] Space news and outer space articles from New Scientist - New Scientist Space Cookies on the New Scientist website close Our website uses cookies, which are small text files that are widely used in order to make websites work more effectively. To continue using our website and consent to the use of cookies, click away from this box or click 'Close' Find out about our cookies and how to change them Space

Observable Universe The surface of last scattering is the collection of points in space at the exact distance that photons from the time of photon decoupling just reach us today. These are the photons we detect today as cosmic microwave background radiation (CMBR). However, with future technology, it may be possible to observe the still older neutrino background, or even more distant events via gravitational waves (which also should move at the speed of light).