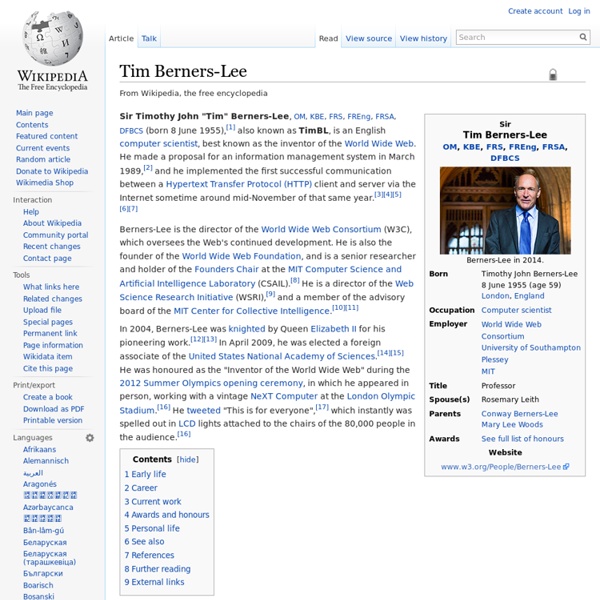 Sir Timothy John "Tim" Berners-Lee, OM, KBE, FRS, FREng, FRSA, DFBCS (born 8 June 1955),[1] also known as TimBL, is an English computer scientist, best known as the inventor of the World Wide Web. He made a proposal for an information management system in March 1989,[2] and he implemented the first successful communication between a Hypertext Transfer Protocol (HTTP) client and server via the Internet sometime around mid-November of that same year.[3][4][5][6][7] Berners-Lee is the director of the World Wide Web Consortium (W3C), which oversees the Web's continued development. He is also the founder of the World Wide Web Foundation, and is a senior researcher and holder of the Founders Chair at the MIT Computer Science and Artificial Intelligence Laboratory (CSAIL).[8] He is a director of the Web Science Research Initiative (WSRI),[9] and a member of the advisory board of the MIT Center for Collective Intelligence.[10][11] Early life Career Current work Awards and honours Personal life

Energy Catalyzer The device was demonstrated to invited audiences several times in 2011, and commented on by various academics and others, but no independent tests have been made, and no peer-reviewed tests have been published. Steve Featherstone wrote in Popular Science that by the summer of 2012 Rossi's "outlandish claims" for the E-Cat seemed "thoroughly debunked" and that Rossi "looked like a con man clinging to his story to the bitter end. Berners-Lee: Weaving the Web Supplementary material to the book The original design and ultimate destiny of the World Wide Web, by its inventor Buy: from Amazon.com (paperback), Barnes & Noble (paperback), Booksamillion (paperback), Borders (paperback), Powells (paperback), or Wordsworth(paperback). *

The Rise of the Toilet Texter We know where some of you are reading this. A recently released survey of the mobile phone habits of Americans, going where few other surveys care to go, has found that 75 percent of the populace have used their mobile devices while on the toilet. Among those aged 28 to 35, the figure is 91 percent. The survey of 1,000 people by the marketing agency 11mark found that private contemplation has given way to toilet-time talking, texting, shopping, using apps, or just surfing the Web, by both sexes and most ages.

What Are The 20 Most Expensive Keyword Categories In Google AdWords? Google makes a heck of a lot of money from online advertising. In fact, 97 percent of Google’s revenue, which totaled $33.3 billion in the past twelve months, comes from advertising. WordStream, a venture capital-backed provider of hosted software that automates most of the manual work involved with creating and optimizing both paid and natural search engine marketing campaigns, has done some research to discover which keyword categories fetch the highest costs per click (CPC) in Google’s AdWords solution. And of course, they made an infographic based on the results of their research (embedded below). WordStream compiled data from its own, vast keyword database and the Google Keyword Tool to determine the top 10,000 most expensive English-language keywords over a 90-day period.

Vint Cerf Vinton Gray "Vint" Cerf[1] (/ˈsɜrf/; born June 23, 1943) is an American computer scientist, who is recognized as one of[5] "the fathers of the Internet",[6] sharing this title with American computer scientist Bob Kahn.[7][8] His contributions have been acknowledged and lauded, repeatedly, with honorary degrees and awards that include the National Medal of Technology,[1] the Turing Award,[9] the Presidential Medal of Freedom,[10] and membership in the National Academy of Engineering. In the early days, Cerf was a program manager for the United States Department of Defense Advanced Research Projects Agency (DARPA) funding various groups to develop TCP/IP technology. When the Internet began to transition to a commercial opportunity during the late 1980s,[citation needed] Cerf moved to MCI where he was instrumental in the development of the first commercial email system (MCI Mail) connected to the Internet.

Gallium nitride Its sensitivity to ionizing radiation is low (like other group III nitrides), making it a suitable material for solar cell arrays for satellites. Military and space applications could also benefit as devices have shown stability in radiation environments.[6] Because GaN transistors can operate at much higher temperatures and work at much higher voltages than gallium arsenide (GaAs) transistors, they make ideal power amplifiers at microwave frequencies. Physical properties[edit] Developments[edit] GaN with a high crystalline quality can be obtained by depositing a buffer layer at low temperatures.[12] Such high-quality GaN led to the discovery of p-type GaN,[9] p-n junction blue/UV-LEDs[9] and room-temperature stimulated emission[13] (indispensable for laser action).[14] This has led to the commercialization of high-performance blue LEDs and long-lifetime violet-laser diodes, and to the development of nitride-based devices such as UV detectors and high-speed field-effect transistors.

Yochai Benkler Yochai Benkler speaking at UC Berkeley School of law in 2006 Yochai Benkler (born 1964) is an Israeli-American professor of Law and an author. Since 2007, he has been the Berkman Professor of Entrepreneurial Legal Studies at Harvard Law School. He is also a faculty co-director of the Berkman Center for Internet & Society at Harvard University. STEVEN JOHNSON & KEVIN KELLY in conversation with Robert Krulwich In a world of rapidly accelerating change, from iPads to eBooks to genetic mapping to MagLev trains, we can't help but wonder if technology is our servant or our master, and whether it is taking us in a healthy direction as a society. What forces drive the steady march of innovation?How can we build environments in our schools, our businesses, and in our private lives that encourage the creation of new ideas--ideas that build on the new technology platforms in socially responsible ways? Kevin Kelly and Steven Johnson will look at where technology is taking us. One of the co-founders of Wired Magazine, Kelly's new book, What Technology Wants, makes the argument that technology as a whole is not a jumble of wires and metal but a living, evolving organism that has its own unconscious needs and tendencies.

Alan Turing Alan Mathison Turing, OBE, FRS (/ˈtjʊərɪŋ/ TEWR-ing; 23 June 1912 – 7 June 1954) was a British mathematician, logician, cryptanalyst, philosopher, pioneering computer scientist, mathematical biologist, and marathon and ultra distance runner. He was highly influential in the development of computer science, providing a formalisation of the concepts of "algorithm" and "computation" with the Turing machine, which can be considered a model of a general purpose computer.[2][3][4] Turing is widely considered to be the father of theoretical computer science and artificial intelligence.[5] During World War II, Turing worked for the Government Code and Cypher School (GC&CS) at Bletchley Park, Britain's codebreaking centre. For a time he led Hut 8, the section responsible for German naval cryptanalysis.

the inventor of the world wide web by mohammadabdelkhalek Jan 30