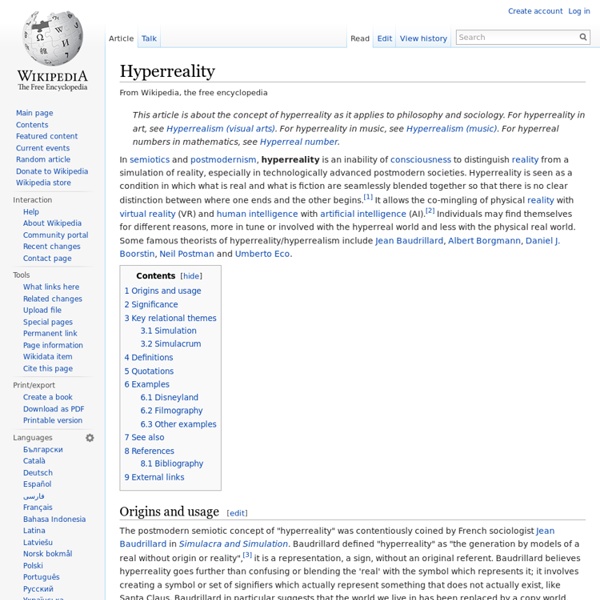 In semiotics and postmodernism, hyperreality is an inability of consciousness to distinguish reality from a simulation of reality, especially in technologically advanced postmodern societies. Hyperreality is seen as a condition in which what is real and what is fiction are seamlessly blended together so that there is no clear distinction between where one ends and the other begins.[1] It allows the co-mingling of physical reality with virtual reality (VR) and human intelligence with artificial intelligence (AI).[2] Individuals may find themselves for different reasons, more in tune or involved with the hyperreal world and less with the physical real world. Some famous theorists of hyperreality/hyperrealism include Jean Baudrillard, Albert Borgmann, Daniel J. Origins and usage[edit] Hyperreality can also be thought of as "reality by proxy"; simply put, an individual takes on someone else's version of reality and claims it as his or her own. Significance[edit] Key relational themes[edit]

The Town and the City The Town and the City is a novel by Jack Kerouac, published by Harcourt Brace in 1950. This was the first major work published by Kerouac, who later became famous for his second novel On the Road (1957). Like all of Jack Kerouac's major works, The Town and the City is essentially an autobiographical novel, though less directly so than most of his other works. The Town and the City was written in a conventional manner over a period of years, and much more novelistic license was taken with this work than after Kerouac's adoption of quickly written "spontaneous prose". The novel is focused on two locations (as suggested by the title): one, the early Beat Generation circle of New York in the late 1940s, the other, the nearly rural small town of Galloway, Massachusetts that the main character comes from, before going off to college on a football scholarship. Publication[edit] In December 1948, Scribner's again rejected the manuscript, despite changes that Kerouac had made to the text.

Corporatism This article is about the general social theory. For business influence in politics, see Corporatocracy. For the process of reorganizing institutions on a corporate or business basis, see Corporatization. In 1881, Pope Leo XIII commissioned theologians and social thinkers to study corporatism and provide a definition for it. Corporatism may also refer to economic tripartism involving negotiations between business, labour, and state interest groups to establish economic policy.[11] This is sometimes also referred to as neo-corporatism and is associated with social democracy.[12] Common types[edit] Kinship corporatism[edit] Kinship-based corporatism emphasizing clan, ethnic, and family identification has been a common phenomenon in Africa, Asia, and Latin America. Corporatism in religion and spiritualism[edit] Christianity[edit] Biology[edit] Corporatism in politics and political economy[edit] Communitarian corporatism[edit] Ancient Greece developed early concepts of corporatism. and Notes[edit]

On the Road On the Road is a novel by American writer Jack Kerouac. On the Road is based on the travels of Kerouac and his friends across America. It is considered a defining work of the postwar Beat and Counterculture generations, with its protagonists living life against a backdrop of jazz, poetry and drug use. The idea for On the Road formed during the late 1940s. It was to be Kerouac's second novel, and it underwent several drafts before he completed it in April 1951. It was first published by Viking Press in 1957. Origins[edit] Many aspects go into understanding the context of On the Road, and they must be viewed cohesively in order to appreciate why the book was as relevant and pertinent as it was. Kerouac biography[edit] Kerouac was born in a French-Canadian neighborhood of Lowell, Massachusetts, and learned English at age six. Many of the events depicted in the book are the experiences that shaped both its content and production. Historical context[edit] Beat Generation summary[edit] J.

Total institution A total institution is a place of work and residence where a great number of similarly situated people, cut off from the wider community for a considerable time, together lead an enclosed, formally administered round of life.[1]:44[2]:855[3] In Discipline and Punish, Michel Foucault discussed total institutions in the language of complete and austere institutions.[4]:231 Term origins[edit] Typology of total institutions[edit] Total institutions are divided by Goffman into five different types:[3][9] Facts[edit] According to S. Tourism and the total institution[edit] Sociologists have pointed out that tourist venues such as cruise ships are acquiring many of the characteristics of total institutions. Estimations[edit] David Rothman states that "historians have confirmed the validity of Goffman's concept of 'total institutions' which minimizes the differences in formal mission to establish a unity of design and structure Further reading[edit] Wallace, Samuel (1971). See also[edit] References[edit]

The Equation of Time - Why Sundial Time Differs From Clock Time Depending On Time Of Year It is (at the time of initial writing) 12 December 2004, in Sheffield, United Kingdom. It is now getting dark quite early; but the time of sunset in the afternoon has just about reached its earliest for the season; and we should now gradually be seeing the period of daylight in the late afternoon start to increase again. But, isn't the shortest period of daylight the winter solstice, on or about the 21st or 22nd of December? Actually, it is; but what we've just been talking about is the period of daylight in the afternoon. The total period of daylight is that in the morning, before noon, plus that in the afternoon. One reason for this, of course, is Daylight Saving Time, which in Britain, operates from the latter part of March to the latter part of October. The third factor, which is variable throughout the year, is what is known as the Equation of Time. What is the Equation of Time, and to what is it due? The Sun, however, does not return to the same position in the sky in this time.

Adultism An age restriction on operating a waffle baker independently Adultism has been defined as "the power adults have over children".[1] More narrowly, 'adultism is prejudice and accompanying systematic discrimination against young people'.[2] Etymology[edit] Coinage[edit] The word adultism was used by Patterson Du Bois in 1903,[3] and appears in French psychology literature in 1929, describing the influence of adults over children. It was seen as a condition wherein a child possessed adult-like "physique and spirit", and was exemplified by, A boy of 12 and a girl of 13 who had the spirit and personality of adults.... This definition was superseded by a late 1970s journal article proposing that adultism is the abuse of the power that adults have over children. Usage[edit] Similar terms[edit] At least one prominent organization describes discrimination against youth as ageism, which is any form of discrimination against anyone due to their age. Causes[edit] Evidence of adultism[edit] Results[edit]

Happy New Year: Pick Up a New Skill New Year’s Eve is a time for reflection about the year that passed and a time to set goals for the future. Should we keep doing what are we doing, or should we tackle new challenges? If you’re seven, or twelve, or twenty, it’s easy to think about new ambitions: learn Spanish, learn to paint, do a flip off your skateboard. For me, much of the past year revolved around discussions prompted by a book of mine that was published in January, called “Guitar Zero,” about the science of learning and my own adventures in learning guitar at the age of forty. The critical-period effect is the idea that you can’t do certain things—like learn a language, or learn an instrument—unless you start early in life. While I was writing, I imagined that I was alone in my quest; the conceit was that I was going to practice for ten thousand hours, because nobody else my age would ever be willing to invest that kind of time. Learning a new skill can also have unexpected benefits.

Hallucination Hallucinations can occur in any sensory modality — visual, auditory, olfactory, gustatory, tactile, proprioceptive, equilibrioceptive, nociceptive, thermoceptive and chronoceptive. A mild form of hallucination is known as a disturbance, and can occur in most of the senses above. These may be things like seeing movement in peripheral vision, or hearing faint noises and/or voices. Auditory hallucinations are very common in paranoid schizophrenia. They may be benevolent (telling the patient good things about themselves) or malicious, cursing the patient etc. Hypnagogic hallucinations and hypnopompic hallucinations are considered normal phenomena. Hallucinations can be associated with drug use (particularly deliriants), sleep deprivation, psychosis, neurological disorders, and delirium tremens. Classification[edit] Visual[edit] Auditory[edit] Auditory hallucinations (also known as paracusia)[4] are the perception of sound without outside stimulus. Command hallucinations[edit] Olfactory[edit]