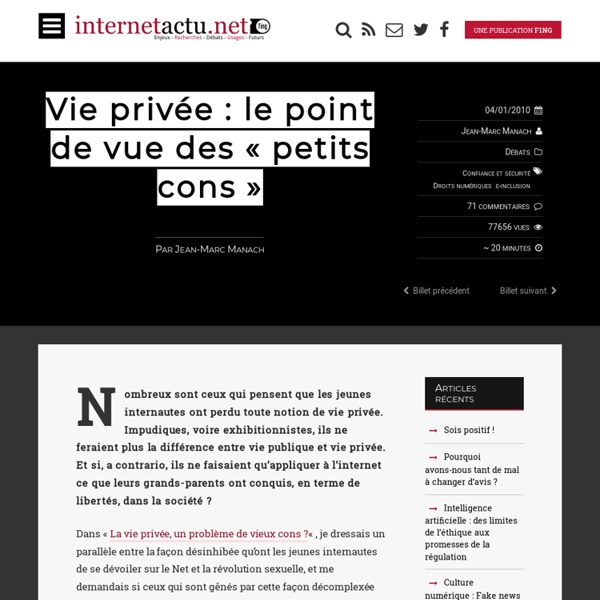 Should people “live tweet” during an event or presentation? « To January 11, 2010 Tony Hollingsworth Social Networking, Twitter I recently attended a course called “Presenting with Confidence“, delivered by Steve Herzberg. Digital Identity: Moving to Privacy 3.0 [Dave Birch] A typically excellent piece from Jan Chipchase that I've continued to think about again and again since reading it. Commenting on the Facebook privacy stories that have were around recently, he asked whether the Facebook privacy "moment" is: their Microsoft Moment, that point where the internal perception of themselves starts to significantly, negatively diverge from the public perception?

The Best-Performing CEOs in the World A lot of people have blamed short-term thinking for causing our current economic troubles, which has set off a debate about what time window we should use to assess a CEO’s performance. Today boards of directors, senior managers, and investors intensely want to know how CEOs handle the ups and downs of running businesses over an extended period. Many executive compensation plans define the “long term” as a three-year horizon, but the real test of a CEO’s leadership has to be how the company does over his or her full tenure.

The End of Online Anonymity It seems we're approaching a new age here on the Internet. Instead being anonymous, faceless IP addresses, social computing and changing technologies have allowed the lines between the "real" world and the "virtual" world to blur. Web 2.0 helped create a world where your identity is revealed in bits and pieces as you share snippets of your life online - a photo here, a Stumble there, a tweet, a Digg, etc. 50 Cool Search Engines for Serious Readers The Internet has proven itself as a valuable resource for all types of readers, from collectors of rare books to tech-minded readers who shop, network and download books online. But if you’re having trouble finding exactly what you need, whether it’s a book review, a book by a certain author, or a digitized anthology for your class at an online college for creative writing, you’ll want to use sophisticated tools that direct you to high-quality resources. Here are 50 cool search engines for serious readers and students. For even more great search engines, read our updated list.

Introducing the New TweetPsych and TweetPsych for Lists After I first launched the Twitter psychological profiling tool TweetPsych , some of the most common feedback I got was that it was hard to understand the results. So I designed a new reporting mechanism and design to solve that problem. The new TweetPsych uses “meta dimensions” which are combination of related factors from the two linguistic algorithms ( RID and LIWC ) the application uses. Each of these comes with a description and is represented on a bar graph. Each user’s profile is compared against the average user and the report explains which dimensions occur more or less frequently than the average.

Reputation Is Dead: It’s Time To Overlook Our Indiscretions Trying to control, or even manage, your online reputation is becoming increasingly difficult. And much like the fight by big labels against the illegal sharing of music, it will soon become pointless to even try. It’s time we all just give up on the small fights and become more accepting of the indiscretions of our fellow humans. Because the skeletons are coming out of the closet and onto the front porch.

Blondes are more aggressive than brunettes &#039;because they attract more male attention&#039; By David Wilkes Updated: 11:55 GMT, 18 January 2010 After years of being the butt of jokes about being dumb, blondes may be having the last laugh after all, research has revealed. An academic study has found that women with fair hair are more aggressive and confident than brunettes or redheads.