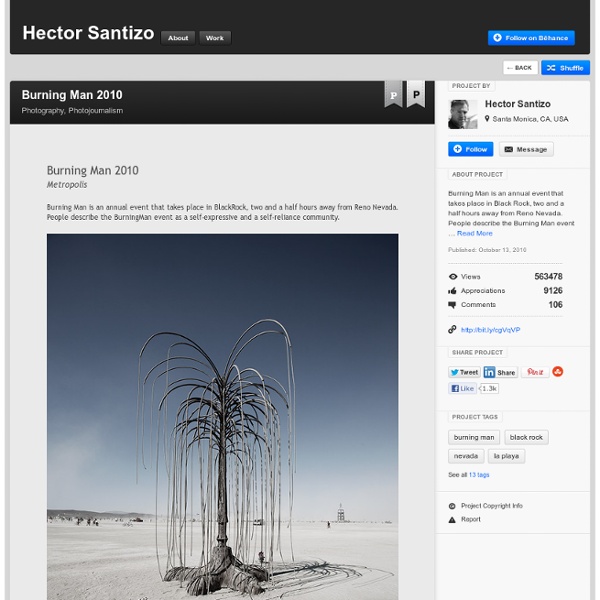 Famous Pictures from the Internet in the early 2000's Pop Culture With the current expansion of Photoshop, it can be difficult to determine if a picture posted online is real or fake. Every year hundreds of photographs become viral on the Internet, and in most cases we have an opinion over their authenticity. This article will examine 20 real pictures that were made famous by the Internet. In most cases, the photos have caused an Internet debate over their origin. All of the images depict real events, but some have false back-stories. Award-Winning Nature and Wildlife Photography by Burrard-Lucas - StumbleUpon This is a special edition and a first on PxlEyes: we have the pleasure of presenting 50 of the most incredible wildlife photos taken by a group, formed of two talented photographers. They’re called Burrard – Lucas and they are brothers! With numerous awards for their work, the young brothers from the UK had the privilege of traveling to many remote and wild locations from around the world. Their images were displayed in the Natural History Museum in London and the Smithsonian Museum in Washington DC. The main goal of their portofolio is to inspire people and encourage them to preserve the beautiful nature with its amazing flora and fauna. That’s why we also love the idea of displaying a showcase that rises from all the passion for a pure and better life, for nature!

Still life: Bent objects UPDATE: The Return of Bent Objects Wires transform these objects from inanimate to hilarious works of art. Little polish girl McDonalds as Sculpture Materials Yeah, this is where those come from Dancing Queens DIY Design Community & Keywords: DIY, Craft, art, wall art Bare walls are the pits. Liven those bad boys up with some affordable modern art -- that you made yourself! Here are ten of our favorite DIY wall art projects to make this week. 1. Bubbles of magnificent splendor! This project is high-impact and low, low cost.

Photos of Ramadan 2013 Ramadan, the Islamic month of fasting, began earlier this week, with the observation of the Hilal, or new moon. Throughout this ninth month on the Islamic calendar, devout Muslims must abstain from food, drink, and sex from dawn until sunset. The fast, one of the five pillars of Islam, is seen as a time for spiritual reflection, prayers, and charity. After sunset, Muslims traditionally break the fast by eating three dates, performing the Maghrib prayer, and sitting down to Iftar, the main evening meal, where communities and families gather together. Gathered here are images of Muslims around the world observing Ramadan this year, including areas of recent turmoil, like Egypt and Turkey. [33 photos]

Pondly - StumbleUpon Article by James Pond I am the owner of Pondly.com / art lover / electrical engineer / software developer / MBA in e-business student. I blog for pleasure and love to share my Internet findings. Web site: Irina Werning, a Buenos Aires Photographer asked friends and family to “re-enact” old photos of themselves for an ongoing project, which she christened “Back to the Future.” (March 2014) Renewed Anti-Government Protests in Turkey One day last summer, as anti-government protests roiled Istanbul, a 14-year-old boy named Berkin Elvan was on his way to buy bread when he was struck in the head by a tear gas canister. After spending months in a coma, Berkin died this week -- reigniting anger at Prime Minister Recep Tayyip Erdogan and sending thousands back into the streets in dozens of cities. Riot police were quick to react, disrupting demonstrations with water cannons, clubs, and more tear gas. At least two were killed, dozens more injured. Opposition groups are calling for further protests and are still seeking the ouster of Prime Minister Erdogan. [38 photos]

Dark Photography By Leszek Bujnowski August 12th, 2011 Huda Ikraam Leszek Bujnowski is wonderful creative photographer they live in poland and date of birth is 1977. This Damn Beautiful Autumn - Fall in Photographs You could easily argue that autumn is the most beautiful season of the year. Leaves turn to yellow, orange, and bright shades of crimson. They fall like a shower from the trees, giving us a way to watch the wind dance. Holi 2014: The Festival of Colors This week Hindus around the world celebrate Holi, the Festival of Colors. Holi is a popular springtime celebration observed on the last full moon of the lunar month. Participants traditionally throw bright, vibrant powders at friends and strangers alike as they celebrate the arrival of spring, commemorate Krishna's pranks, and allow each other a momentary freedom -- a chance to drop their inhibitions and simply play and dance. Gathered here are images of this year's Holi festival from across India. See also India's 'High' Holiday. [24 photos]