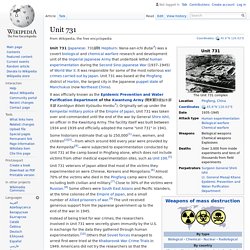 Was a covert biological and chemical warfare research and development unit of the Imperial Japanese Army that undertook lethal human experimentation during the Second Sino-Japanese War (1937–1945) of World War II. It was responsible for some of the most notorious war crimes carried out by Japan. Unit 731 was based at the Pingfang district of Harbin, the largest city in the Japanese puppet state of Manchukuo (now Northeast China). It was officially known as the Epidemic Prevention and Water Purification Department of the Kwantung Army (関東軍防疫給水部本部, Kantōgun Bōeki Kyūsuibu Honbu?). Formation[edit] 44 Days Of Hell – The Murder Of Junko Furuta. Pictured Left; School photo of Junko Furuta November 22nd, 1972 – January 4th, 1989 44-days-of-hell November 25th, 1988 – January 4th, 1989 TOKYO, JAPAN → Born November 22nd, 1972, Junko Furuta had just celebrated her 17th birthday three days prior. 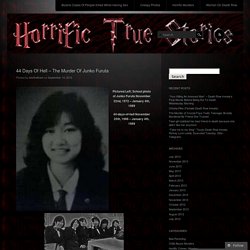 The Japanese teenager and Junior (grade 11) attended Yashio-Minami High School in Saitama Prefecture in Misato. On November 25th, 1988, Junko left School and was walking home (although some reports say she was walking to her part-time after school job.) She never made it home. She was kidnapped by a group of young men, including a 17-year-old who was identified as ‘Jō’ and would be later given the surname Kamisaku.

That was the beginning of her 44 days of torture. To forestall a manhunt, the kidnappers coerced Furuta into calling her mother and telling her that she had run away from home, but was with “a friend” and was not in danger. DAY 1: November 22, 1988: Kidnapped Kept captive in house, and posed as one of boy’s girlfriend Body mutilated. The Gruesome Story of a Murdered Tennessee Couple You May Have Never Heard – But That You Will Never Forget. After a radio caller made him aware of the extremely disturbing story of Christopher Newsom and Channon Christian in Knoxville, Tenn., Glenn Beck researched the case and was horrified at what he found. 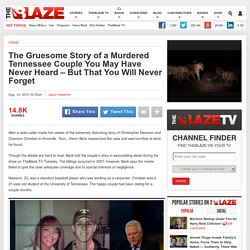 Though the details are hard to hear, Beck told the couple’s story in excruciating detail during his show on TheBlaze TV Tuesday. The killings occurred in 2007; however, Beck says the media failed to give the case adequate coverage due to special interests or negligence. Newsom, 23, was a standout baseball player who was working as a carpenter. Christian was a 21-year-old student at the University of Tennessee. The happy couple had been dating for a couple months. (TheBlaze TV) The Ogden Hi-Fi Shop Massacre. Stan Walker. 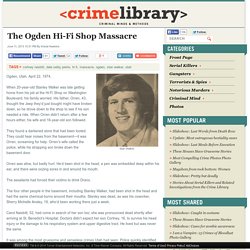 Ogden, Utah. April 22, 1974. When 20-year-old Stanley Walker was late getting home from his job at the Hi-Fi Shop on Washington Boulevard, his family worried. His father, Orren, 43, thought the Jeep they’d just bought might have broken down, so he drove down to the shop to see if his son needed a ride. When Orren didn’t return after a few hours either, his wife and 16-year-old son followed. They found a darkened store that had been looted. Orren was alive, but badly hurt. The assailants had forced their victims to drink Drano. Texas set to execute Lisa Coleman for gruesome murder of child. When emergency services arrived at the home Lisa Coleman shared with her lover they found the bruised and emaciated dead body of nine-year-old Davontae Williams clad only in bandages and a diaper. 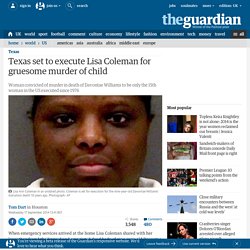 Ten years later, Coleman is set to be executed in Texas for her role in the boy’s death. Barring the unlikely success of a last-minute appeal to the supreme court, on Wednesday at 6pm CT, the 38-year-old will become only the 15th woman put to death in the US since capital punishment was restored in 1976. Though women commit about one in 10 murders in the US they account for only 1% of executions.

But the jury in Tarrant County was persuaded to hand down the ultimate punishment after hearing testimony at Coleman’s trial that detailed the gruesome treatment the child suffered at a low-rent apartment complex a short drive south of the Dallas Cowboys’ NFL stadium. Sylvia Likens. Sylvia Marie Likens (January 3, 1949 – October 26, 1965) was an American murder victim. 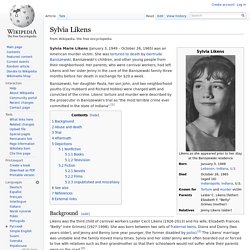 She was tortured to death by Gertrude Baniszewski, Baniszewski's children, and other young people from their neighborhood. Her parents, who were carnival workers, had left Likens and her sister Jenny in the care of the Baniszewski family three months before her death in exchange for $20 a week. Baniszewski, her daughter Paula, her son John, and two neighborhood youths (Coy Hubbard and Richard Hobbs) were charged with and convicted of the crime.

Likens' torture and murder were described by the prosecutor in Baniszewski's trial as "the most terrible crime ever committed in the state of Indiana".[1] Background[edit] Likens was the third child of carnival workers Lester Cecil Likens (1926-2013) and his wife, Elizabeth Frances "Betty" (née Grimes) (1927-1998). Likens babysat and ironed, the same jobs held by Gertrude Baniszewski. Abuse and death[edit] Trial[edit] Aftermath[edit] Depictions[edit] Books[edit]