(2000) Bitterroot National Forest Fire. (2003) Astronaut Ilan Ramon admires the Earth from Space Shuttle Columbia. (2010) Icelandic girl carrying a lamb to shelter from falling ash during Iceland's volcanic eruption. Burning Man 2010. Famous Pictures from the Internet in the early 2000's. Pop Culture With the current expansion of Photoshop, it can be difficult to determine if a picture posted online is real or fake. 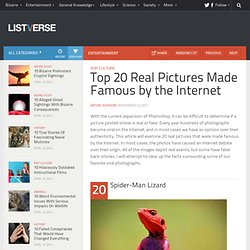 Every year hundreds of photographs become viral on the Internet, and in most cases we have an opinion over their authenticity. This article will examine 20 real pictures that were made famous by the Internet. In most cases, the photos have caused an Internet debate over their origin. All of the images depict real events, but some have false back-stories. The Mwanza Flat-headed Agama (Agama mwanzae) is a lizard in the family Agamidae. Anjana is a chimpanzee that lives at TIGERS: The Institute of Greatly Endangered and Rare Species in South Carolina, U.S. A solar eclipse occurs when the Moon passes between the Earth and Sun, thereby totally or partially obscuring the image of the Sun.

Burning Man 2011. (3/8/2012) A child dressed as a clown participates in the Purim festival in Jerusalem. Photos of Ramadan 2013. Ramadan, the Islamic month of fasting, began earlier this week, with the observation of the Hilal, or new moon. 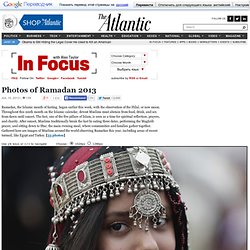 Throughout this ninth month on the Islamic calendar, devout Muslims must abstain from food, drink, and sex from dawn until sunset. (6 Nov 2013) 2 engineers embrace before death. Kiev as of 19 February 2014. (2014) Orthodox priest preventing clash, Ukraine. Holi 2014: The Festival of Colors. This week Hindus around the world celebrate Holi, the Festival of Colors. 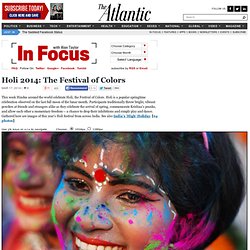 Holi is a popular springtime celebration observed on the last full moon of the lunar month. Participants traditionally throw bright, vibrant powders at friends and strangers alike as they celebrate the arrival of spring, commemorate Krishna's pranks, and allow each other a momentary freedom -- a chance to drop their inhibitions and simply play and dance. Gathered here are images of this year's Holi festival from across India. See also India's 'High' Holiday. [24 photos] (March 2014) Renewed Anti-Government Protests in Turkey. One day last summer, as anti-government protests roiled Istanbul, a 14-year-old boy named Berkin Elvan was on his way to buy bread when he was struck in the head by a tear gas canister. 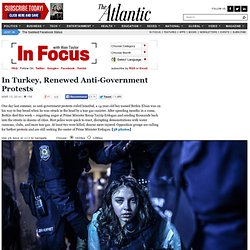 After spending months in a coma, Berkin died this week -- reigniting anger at Prime Minister Recep Tayyip Erdogan and sending thousands back into the streets in dozens of cities. Riot police were quick to react, disrupting demonstrations with water cannons, clubs, and more tear gas. At least two were killed, dozens more injured. Opposition groups are calling for further protests and are still seeking the ouster of Prime Minister Erdogan. [38 photos] (March 2014) Photos Of Russian troops In Crimea. 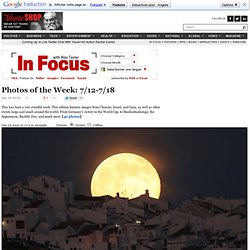 This edition features images from Ukraine, Israel, and Gaza, as well as other events large and small around the world. From Germany's victory in the World Cup, to Manhattanhenge, the Supermoon, Bastille Day, and much more. [40 photos] (17 July 2014) Palestinian man and son take refuge in school on Gaza Strip. Photos of the Week: 7/26 - 8/1/2014. This week's edition includes a Canadian hitch-hiking robot, a British pier fire, Swiss Alpine wrestling, Irish Bog Snorkeling, German crop circles, and much more. [35 photos] Use j/k keys or ←/→ to navigate Choose: Workers walk down stairs to a parking structure as water cascades down on them on the UCLA campus after flooding from a broken 30-inch water main under nearby Sunset Boulevard inundated a large area of the campus in the Westwood section of Los Angeles on July 29, 2014. 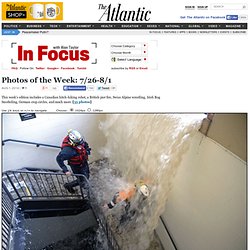 The 30-inch (75-centimeter) 93-year-old pipe that broke made a raging river of the street and sent millions of gallons of water across the school's athletic facilities, including the famed floor of Pauley Pavilion, the neighboring Wooden Center and the Los Angeles Tennis Center, and a pair of parking structures that took the brunt of the damage. (2014) Youth in Venezuela. Photos of the Week: 8/30-9/5/2014. This week we have a look at the West Indian Day Parade in Brooklyn, Ecuador's still-erupting Tungurahua volcano, Iraqi forces taking the battle to ISIS, the massive Jurong Rock Caverns below Singapore, a kitesurfing world record in Spain, and an 82-foot-tall white rabbit in Taiwan, as well as many other subjects. [35 photos] Use j/k keys or ←/→ to navigate Choose: Leng Yuting, 26, poses underwater for her wedding pictures at a photo studio in Shanghai on September 3, 2014, ahead of her wedding next year. 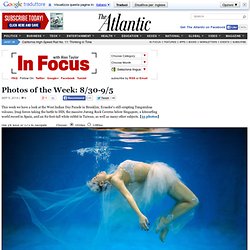 Her fiance Riyang said they had their wedding photographs taken underwater because "it's romantic and beautiful. " (Sept 2014) Rescuers at an ashen shrine near the summit of Volcano Ontake. The most powerful images of Latin America in 2014. The Best Photos in National Geographic in 2014. Hay una razón por la cual National Geographic es el espacio para las mejores fotografías del mundo. 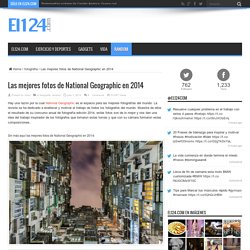 Powerful Photos Of The Week: 8/21 - 8/28/15. The Most Powerful Science Photos This Week (8/21 -8/29/15) (2015) Father and children in Gaza, by Emad Samir Nassar. 52 Images To Recap 2015 Around The World. 24 Powerful Images Show the World in 2015. This year brought with it a slew of moments worthy of history books — with bloodshed and tears shed, with losses on a big scale and a small one, from spectacle on the political stage to the Super Bowl stage, from victories to defeats. 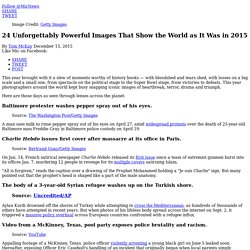 This year photographers around the world kept busy snapping iconic images of heartbreak, terror, drama and triumph. Here are those days as seen through lenses across the planet. Baltimore protester washes pepper spray out of his eyes. A man uses milk to rinse pepper spray out of his eyes on April 27, amid widespread protests over the death of 25-year-old Baltimore man Freddie Gray in Baltimore police custody on April 19. Charlie Hebdo issues first cover after massacre at its office in Paris. On Jan. 14, French satirical newspaper Charlie Hebdo released its first issue since a team of extremist gunmen burst into its offices Jan. 7, murdering 12 people in revenge for its multiple covers satirizing Islam.

Earthquakes in Nepal kill thousands. (2016) Indigenous protestor surveys Dakota-Access Pipeline. Mounted police cavalry charge in Brazil (2016) 50 Captivating Photos Of Girls Going To School Around The World (2011 - 2016) The Scrutiny of James Comey (6/8/2017) (2016) Surreal Photos Of Burning Man By Victor Habchy. We all have that one place we want to visit. 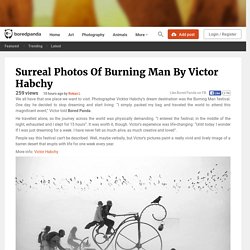 Photographer Vicktor Habchy’s dream destination was the Burning Man festival. One day he decided to stop dreaming and start living: “I simply packed my bag and traveled the world to attend this magnificent event,” Victor told Bored Panda. Show Full Text He travelled alone, so the journey across the world was physically demanding. “I entered the festival, in the middle of the night, exhausted and I slept for 15 hours”. People say this festival can’t be described. More info: Victor Habchy Thanks for sharing! 3x per week 30,000,000+ monthly readers Error sending email. (March 19, 2018) Wildlife ranger Zacharia Mutai comforts Sudan, the last Northern White Rhino left on the planet, moments before he passed away. (2018) Saudi police officers handing out roses to women drivers. (2018) Mayon Volcano erupts in the Philippines. (2019) Weiguo Hu "Camels in the Desert" (2019) Giraffe in rare snow storm in South Africa.