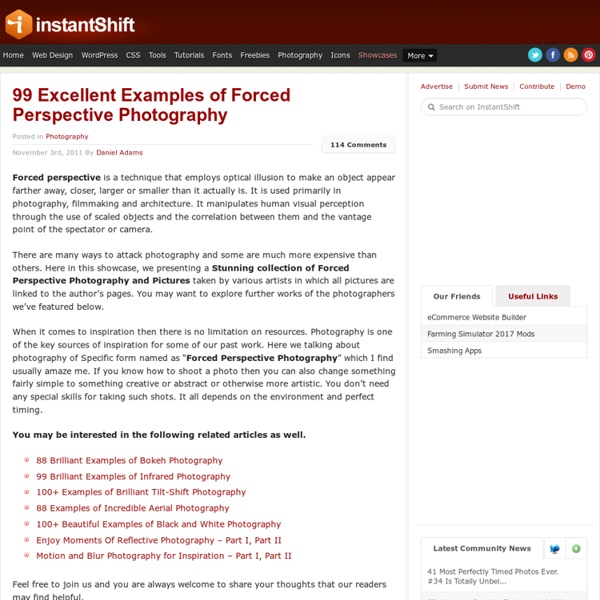 Forced perspective is a technique that employs optical illusion to make an object appear farther away, closer, larger or smaller than it actually is. It is used primarily in photography, filmmaking and architecture. It manipulates human visual perception through the use of scaled objects and the correlation between them and the vantage point of the spectator or camera. There are many ways to attack photography and some are much more expensive than others. Here in this showcase, we presenting a Stunning collection of Forced Perspective Photography and Pictures taken by various artists in which all pictures are linked to the author’s pages. You may want to explore further works of the photographers we’ve featured below. When it comes to inspiration then there is no limitation on resources. You may be interested in the following related articles as well. Feel free to join us and you are always welcome to share your thoughts that our readers may find helpful. Further Resources!

Sleeping in an original bed Art & Design We wouldn't mind having one of these beds as our own. In which one would you like to take a nap? The Photographer's Ephemeris: TPE for Desktop About TPE for Desktop The Photographer’s Ephemeris (TPE) helps you plan outdoor photography shoots in natural light, particularly landscape and urban scenes. It’s a map-centric sun and moon calculator: see how the light will fall on the land, day or night, for any location on earth.

Martin Parr Books by MP / Artist Books by MP / Papers and Zines by MP / Books edited by MP Bad Weather, 1982 Calderdale Photographs, 1984 A Fair Day, 1984 Prescot Now and Then, 1984 The Last Resort, 1986, 1998 Echoes of War Sergei Larenkov His photographs of the siege of Leningrad and St. Petersburg really got lots of name on internet and are famous too. so we present some really nice photographs by sergei, where past and present meet in Moscow, Berlin, Vienna, Prague.. 1. Vienna. 1945/2010. Soviet soldiers in the Imperial Palace Hoffburg.

Badass of the Week: Anthony Omari Anthony Omari Late on the night of January 23, 2012, a 24 year-old Kenyan uber-hero named Anthony Omari awoke to find three gigantic dudes with machetes standing over his bed. He knew right away that they weren't there to sell Girl Scout cookies or ask him for a jumping mid-air high-five. Omari is the custodian of Faraja Children's Home in Ngong, Kenya – a sanctuary of healing and love that over the past several years has grown from a tin-roofed one-room shack in the slums of Nairobi into a decent-sized facility that has taken in 37 boys and girls who have been abandoned or orphaned from the street. A place of hope and peace for children who have tragically slipped through the cracks of Kenyan society.

How do you photograph the Moon? The Moon. Some say it's made of cheese, conspiracy theorists claim that it's a hologram projected by the New World Order, while so-called scientists believe that it's a giant spherical space rock that magically floats above our heads while we sleep. We'll probably never know the truth, but it looks very pretty and lots of people want to photograph it. Remote Focus stacking Focus stacking is a technique for increasing the depth of field by taking a series of photographs with different focus settings and then combining them together using the areas in focus from each image. This technique is useful for macro and close-up photography, landscapes, product photography and any other image where the depth of field is critical and the subject isn't moving. The live view display in DSLR Remote Pro makes it very simple to automate the process of taking a sequence of images with different focus settings by running a script. There is no need to touch the camera and the mirror stays locked up during the sequence which minimizes the chances of camera shake or movement. Once the pictures have been taken they can be combined using free software such as CombineZM or commercial software like Helicon Focus (the example images on this page were combined using CombineZM).

Overused Photography Tricks Photography has potential to be both the most equalizing and polarizing art form imaginable. All you really need to get started is a camera — any will do — and an ability to understand what looks good. On the other hand, there are people who swear that you need 50 lenses, a full flash setup and at least a half-dozen SLR bodies before you could even begin to take it seriously as a hobby. From the Photo Desk Toronto Star Picture Editor Wanda Goodwin shares these delightful images of Kevin Richardson a.k.a "The Lion Whisperer." A new film opening soon in The United States about a rare white lion who escapes becoming a trophy on a wall, is a rare happy ending in a country where more than 1,000 lions are killed legally each year. Kevin Richardson, the man behind the movie, calls himself an "ambassador of lions" and hopes the film will act as one too at a time when foreign tourists are willing to pay up to $40,000 to shoot a big cat. Kevin Richardson, a.k.a. the Lion Whisperer lays with two of his lions on October 11, 2010, in their enclosure at the Kingdom of the White Lion park in Broederstroom, South Africa. (AP Photo/Denis Farrell) Kevin Richardson sprays his lions with water and citronella in their enclosure.

Brooklyn Museum: Annie Leibovitz: A Photographer's Life, 1990–2005 Annie Leibovitz: A Photographer’s Life, 1990–2005, an exhibition of more than 200 photographs, debuts at the Brooklyn Museum, where it will be on view from October 20, 2006, through January 21, 2007, prior to an international tour. The exhibition, sponsored by American Express, is being organized by the Brooklyn Museum. Among the other venues it travels to are the San Diego Museum of Art, the High Museum of Art, the Corcoran Gallery, the de Young Museum, Maison Européenne de la Photographie in Paris, and London’s National Portrait Gallery.

Touchnote postcards help you send a 'selfie' postcard with no stamp More than 130million ‘wish you were here’ postcards will be sent by British holidaymakers this summer as they enjoy a well-earned break. Despite the explosion of social media most of us still prefer to send – or receive – a traditional postcard rather than a digital greeting. Yet digital technology is being harnessed to keep the appeal of the traditional card – with smartphone apps transforming holiday snaps into postcards.

in my case... I had to click on the web page to be able to scroll through the photographs... by billgdiaz Nov 2