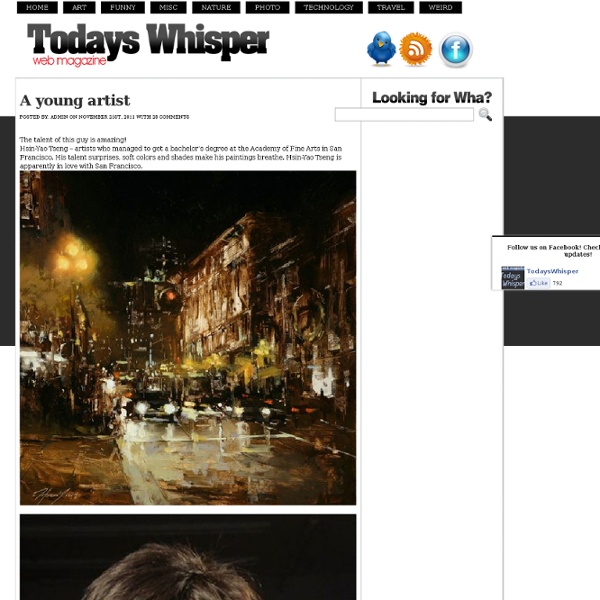 The talent of this guy is amazing! Hsin-Yao Tseng – artists who managed to get a bachelor’s degree at the Academy of Fine Arts in San Francisco. His talent surprises, soft colors and shades make his paintings breathe.

Tea for Three: Shunga Inspired Art by Jeff Faeber (NSFW) » Rush Blog–MUSIC | FASHION | ART | CULTURE “As one who has “fallen from grace,” as it were, I have a natural interest in the underdog, the discarded and unwanted. Hence, I often paint on or incorporate cardboard, trash, society’s forgotten, landfill-bound material. I react to what I feel is often an overly sanitised, saccharine façade that is projected on us by mass commercialisation, or groupthink (or religion or politics or whatever.) There is often beauty in despair. View NSFW images below. For those of us who don’t know, Shunga–according to Wikipedia–is a Japanese term meaning “erotic art.” What that statement is, however, is up to your discretion. More of his work may be seen at jefffaerber.com

Kris Kuksi Makes Demons in Our Mind Come Alive (14 Pics) Seven Deadly Sins What would happen if someone can tap into your darkest nightmares and your most hidden fears? Would they see a world full of aggression and hate? A world where man struggles with his sins, where no one can escape from a hell of mental anguish, suffering, and guilt? This is the world of Kris Kuksi. As Kuksi has stated, "human mind creates this world and humans are what keep it a reality. Through his intricate 3-D sculptural work, we see both the beautiful and dark side of our minds. A Relaxing Evening with Napoleon and Paulina Sanctuary of the Bewildered Sanctuary of the Bewildered - Close-up The Guardian A New Divinity The Decision Lust and Self-Abuse The Last Judment Parasite and Host Gemini Original Sin Lies and Persuasion Lunatic Lander 1 Kris Kuksi website

Olivia Warnecke // Bird Paintings // 2010 Top 12 Banksy Pieces of 2010 12.) San Francisco Banksy is the gold standard when it comes to urban street art. His legendary reputation has only grown since the 2010 release of his intriguing movie, "Exit Through the Gift Shop" (which is streaming now). To promote the film, Banksy went into super-overdrive and attacked city walls across North America like there was no tomorrow. The result is an incredible collection of thought-provoking, clever work that only the brilliant Banksy could come up with. 11.) 10.) 9.) 8.) 7.) 6.) 5.) 4.) 3.) 2.) 1.) Banksy's website More Incredible Street Art:Transformative Street Art by Roa (10 pics)Global Warming & War by Blu (5 pics)Skount + Laguna in Spain (2 pics)Mentalgassi in Berlin (3 pics)

Remarkable Animals Painted in Ink by George Boorujy Brooklyn based artist George Boorujy creates impossibly detailed ink paintings of North American birds and other animals, often pouring numerous photographs and visiting zoos where the animals are kept before embarking on a piece. Boorujy challenges the viewer to confront both the animal and their preconceived notions about it. Through their gaze an interaction evolves with the wild that otherwise would have to be sought out or birthed from happenstance. George’s latest solo show, Blood Memory, opens at P.P.O.W. gallery in New York on March 15.

sidewalk chalk guy sidewalk chalk guy «« back to gprime.net all material copyrighted by its original creator | Riusuke Fukahori Paints Three-Dimensional Goldfish Embedded in Layers of Resin First: watch the video. Japanese artist Riusuke Fukahori paints three-dimensional goldfish using a complex process of poured resin. The fish are painted meticulously, layer by layer, the sandwiched slices revealing slightly more about each creature, similar to the function of a 3D printer. I really enjoy the rich depth of the pieces and the optical illusion aspect, it’s such an odd process that results in something that’s both a painting and sculptural.