World Press Photo Of The Year 2010 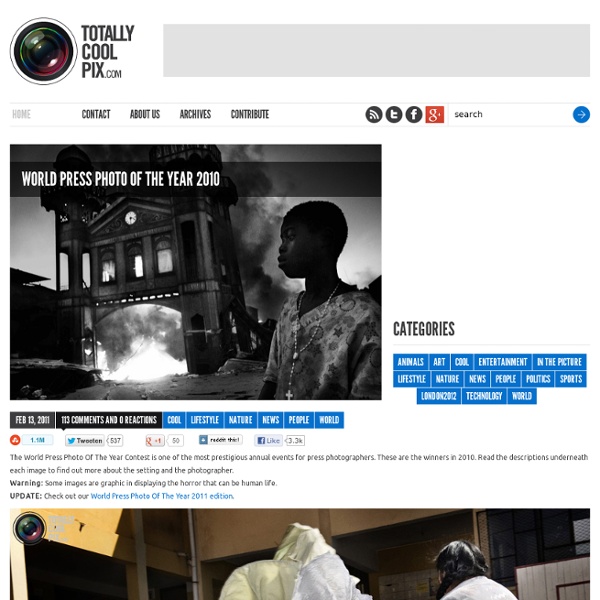 Animals' Eyes Up Close Husky Suren Manvelyan, is a bit of a jack of all trades. He has a PhD in Theoretical Physics specializing in Quantum Chaos but has recently turned his attention to photographing the amazing detailed landscapes of eyes. Early 1900s in Colour - All around the world All around the world - Franny Wentzel - Thursday, May 6th, 2010 : goo [previous] :: [next] In the early part of the 20th century French-Jewish capitalist Albert Kahn set about to collect a photographic record of the world, the images were held in an 'Archive of the Planet'.

20 Amazing Snow Photos Because it’s winter, and because in winter it’s all about the snow, here are a few outstanding photos of winter landscapes from all around the world. Enjoy! (via National Geographic) South Haven, Michigan - Photograph by Charlie Anderson Winter Scene, London - Photograph by Gordon Esle Showcasing Everything Urban Ukraine has been going through many tremendous events the last few months. Peaceful protests escalated to bloody clashes between protesters and police forces resulting into around 100 people dead and many more injured. As the destiny of the situation is still unclear people of Ukraine will not let go of their righteous will. The "Grand Circle" My wife and I took a 2 week photo trip to the southwest (N.Arizona & S. Utah) in September. Here are some of the pics from it Headed to the narrows © by Jeff_Whitford, on Flickr Further towards the narrows © by Jeff_Whitford, on Flickr Toroweap sunset tree © by Jeff_Whitford, on Flickr

mountaintop house in the mist kalabaka greece photo Random photo Submit your photo Stumble Thru landscape photography Tags: 50 Most Strange and Unusual Buildings arround the World The world is full of beautiful strange and fantastic buildings that are the examples of amazing architecture. Architecture Photography brings this beauty to the world, and for this reason, architectural photography is as thrilling as it is heartwarming. In this roundup, we have compiled an amazing collection of some bizarre yet interesting buildings that are reflected through architectural photography.

Riusuke Fukahori Paints Three-Dimensional Goldfish Embedded in Layers of Resin First: watch the video. Japanese artist Riusuke Fukahori paints three-dimensional goldfish using a complex process of poured resin. The fish are painted meticulously, layer by layer, the sandwiched slices revealing slightly more about each creature, similar to the function of a 3D printer. I really enjoy the rich depth of the pieces and the optical illusion aspect, it’s such an odd process that results in something that’s both a painting and sculptural. Pics that don't make you laugh but are still cool I hop you don't mind if I use this thread as an excuse to post some Earth porn: My current Wallpaper, The Havasu Falls The Guilin Mountains "Elephant Foot" Glacier My favorite at the moment: Rainbow(Northern Lights?)

Most Amazing Miniature Food Artworks by Shay Aaron Shay Aaron is a brilliant artist from Israel who makes the most astonishing miniature food jewelry. These foodstuffs look so beautiful that we would desire to eat them. Actually, there’s a whole market out there for miniature food. Plog Captured Photo Blog has moved Posted Jun 02, 2015 Click here to see the latest posts from The Denver Post Captured Photo Blog. (more…) Jun 02, 2015 | Categories: Uncategorized | Add a Comment