Famous Pictures from the Internet in the early 2000's 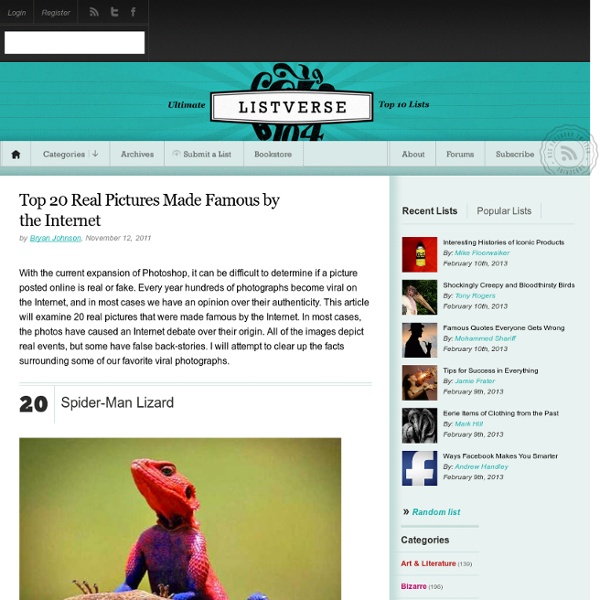 Pop Culture With the current expansion of Photoshop, it can be difficult to determine if a picture posted online is real or fake. Every year hundreds of photographs become viral on the Internet, and in most cases we have an opinion over their authenticity. This article will examine 20 real pictures that were made famous by the Internet. The Mwanza Flat-headed Agama (Agama mwanzae) is a lizard in the family Agamidae. Anjana is a chimpanzee that lives at TIGERS: The Institute of Greatly Endangered and Rare Species in South Carolina, U.S. A solar eclipse occurs when the Moon passes between the Earth and Sun, thereby totally or partially obscuring the image of the Sun. In 2004, a collection of strange pictures surfaced on the Internet of a deer that was discovered atop a 25 foot (7.6 m) tall communications pole. Moose up a Pole In 2004, a similar occurrence took place when a moose was hoisted 50 feet (15.2 m) into the air by construction power lines. Polar Bear Plays with Huskies Related:  Photo: 2000 - 2022

Photos of Ramadan 2013 Ramadan, the Islamic month of fasting, began earlier this week, with the observation of the Hilal, or new moon. Throughout this ninth month on the Islamic calendar, devout Muslims must abstain from food, drink, and sex from dawn until sunset. The fast, one of the five pillars of Islam, is seen as a time for spiritual reflection, prayers, and charity. Use j/k keys or ←/→ to navigate Choose: A Yemeni girl wearing traditional costume, attends a festival for children to welcome the Holy month of Ramadan in the old city of Sanaa, Yemen, on July 8, 2013. Muslim clerics scan the horizon for the crescent moon that will determine the beginning of the holy fasting month of Ramadan, in Jakarta, Indonesia, on July 8, 2013. Egyptians shop in a market on the eve of Ramadan, the sacred holy month for Muslims where many will fast from sun-up to sun-down, on July 9, 2013 in Cairo, Egypt. A Palestinian boy looks at a traditional Ramadan lantern in a street market in Gaza City, on July 6, 2013.

Stunning Self-Portraits by a 17-Year-Old (18 photos) - My Modern Metropolis - StumbleUpon Like Valerie Chiang or Kalie Garrett, Alex Stoddard is one of those talented teenage photographers who knows how to express themselves. His self-portraits are all incredibly unique and after viewing them you're left wondering where he's going to take you next. What I enjoy most is that you can almost feel his passion come through. His commitment to not only executing on an idea but doing it well, is apparent to anyone who sees his photos. I got in touch with Alex to ask him a few questions, including how his style evolved while taking on the 365 project. What have you learned from your 365 project? Your photos are all beautifully artistic. I see that you're friends with Rosie Hardy. How has Flickr helped you develop your style? Are there any quotes you live by? Thanks for the interview, Alex. Check out more of Alex's incredible photos on his Flickr page.

Animals' Eyes Up Close Husky Suren Manvelyan, is a bit of a jack of all trades. He has a PhD in Theoretical Physics specializing in Quantum Chaos but has recently turned his attention to photographing the amazing detailed landscapes of eyes. The ones featured here are all from animals and includes a husky dog, snail, Siames cat, and even a crocodile as well as a few other creatures. With such close photos, one is able to see details such as the irises' color gradients, textures, patterns and even tiny blood vessels, causing these eyes to look like alien landscapes. Manvelyan has also photographed the human eye and photos of it can be found on his website. Black Rabbit Hyena Snail Caiman Nile Crocodile Iguana Siamese Cat Tiger Python Horse Albino Tiger Python Fish Suren Manvelyan's Website via [Lost At E Minor]

B. Börkur Eiríksson B. Borkur Eiriksson graduated with a BA in Illustration from WDKA Rotterdam. He is currently located in Reykjavi where he works at CCP Games as an Art Director. His list of projects include game titles such as EVE Online, World of Darkness and Dust 514. Link: www.borkurart.com All images used with permission by the artist. © B. Living on Light Mr. Prahlad Jani under surveillance in hospital This man proves that we can in fact live on light and that we don’t absolutely need to eat. In this amazing holy man’s case not even water is consumed. Sounds crazy but this man has been studied and observed in Sterling Hospital in the western Indian city of Ahmedabad. Prahlad Jani, who is over 70 years old, spent 10 days under constant observation in May 2010. Before you get too excited and decide to stop eating and drinking water to practice what is called breatharianism, please understand it could kill you and in fact some people have died trying to emulate this holy man and others who model this approach to life. We know where obesity is leading hundreds of millions of people—to diseases like diabetes, cancer and heart disease as well as intense states of malnutrition because of the highly processed foods consumed. In Wikipedia we read, “Inedia (Latin: “fasting”) is the ability to live without food. Dr. A.

(March 2014) Photos Of Russian troops In Crimea 50 Images from National Geographic`s 2010 Photo Contest | Top Design... - StumbleUpon Writen by Bogdan / Comments Off on 50 Images from National Geographic`s 2010 Photo Contest This is one of the most anticipated annual photo contests. The deadline for the submissions is on November 30th so if you have an interesting photo, submit it. Below you can see 50 images collected from different categories. An Indian wrestler smears mud on his head before starting wrestling in Kolkata, India, March 30, 2010. A supercell thunderstorm rolls across the Montana prairie at sunset. Freediver waiting over 800 ft of water for something substantial to come up from the depths. The Great Pyramids. The Music Of Love. Liquid Planet. Brown bear, Buskin River, Kodiak Alaska. Fleet week 2010, standing on Alcatraz island as the Blue angels fly over head. A Wrinkle in Time. This picture was taken in Suradita Village, West Java, Indonesia (2010). Cosmic. The child in us. Cloud and ship. After the Crash. Giraffes at Savannah. A worker in a Bangladesh market taking a much deserved smoke break. Oasis.

A Chronicle of French Hipsters A Chronicle of French Hipsters Posted by Morrison Conway on August 6, 2012 · 74 Comments Theo Gosselin is an amateur photographer from Paris. Like this: Like Loading... Classic Photos of Celebrities | Vivi The Mage Some classic photo’s I got compiled up! I do not own these pictures, someone else had taken them…i am unsure who to give credit for, but enjoy! Jimi Hendrix & Mick Jagger, New York, 1969 The Beatles and Mohammad Ali, 1964 Martin Luther King Jr. and Marlon Brando (The Godfather) Danny DeVito and Christopher Reeve Charlie Chaplin and Albert Einstein Chuck Norris and Bruce Lee Paul Newman and Clint Eastwood Henry Ford, Thomas Edison, Warren G. Steve Jobs and Bill Gates James Dean and Elizabeth Taylor Ian Fleming and Sean Connery Johnny Cash and Ray Charles Elvis Presley and Tom Jones Jerry Lee Lewis, Carl Perkins, Elvis Presley and Johnny Cash Ella Fitzgerald and Louis Armstrong Charlie Chaplin and Gandhi Marilyn Monroe and Sammy Davis Jr. Share!

(March 2014) Renewed Anti-Government Protests in Turkey One day last summer, as anti-government protests roiled Istanbul, a 14-year-old boy named Berkin Elvan was on his way to buy bread when he was struck in the head by a tear gas canister. After spending months in a coma, Berkin died this week -- reigniting anger at Prime Minister Recep Tayyip Erdogan and sending thousands back into the streets in dozens of cities. Riot police were quick to react, disrupting demonstrations with water cannons, clubs, and more tear gas. Use j/k keys or ←/→ to navigate Choose: A young woman, held after she was wounded during clashes between riot police and protestors after the funeral of Berkin Elvan in Istanbul on March 12, 2014. People hold images of Berkin Elvan as they gather In Ankara, Turkey, on March 11, 2014, to protest his death. Thousands march for Berkin Elvan during his funeral in Istanbul on March 12, 2014. The people carry the coffin of Berkin Elvan during his funeral in Istanbul on March 12, 2014.