Some Photographs of That Day 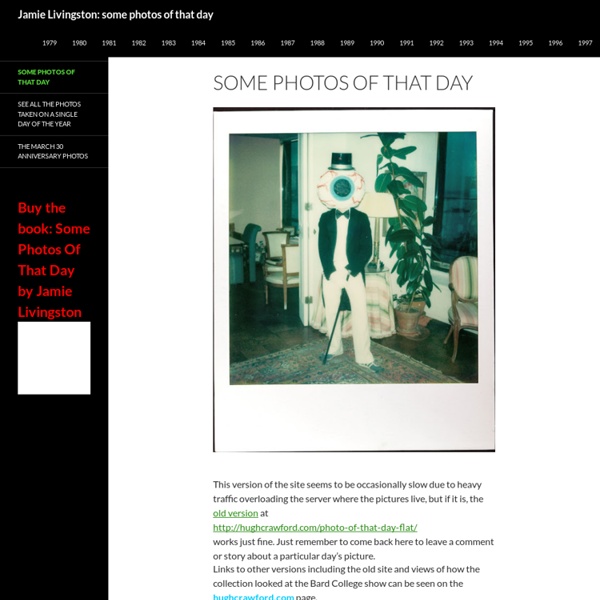 Funny Pictures Cool pictures of foggy day in Dubai taken from skyscrapers. Powerhouse Museum – Photo of the Day April 11th, 2014 by Lynne McNairn This image shows the workings of the busy docks in Darling Harbour in around the 1890s. The area pictured is Grafton Wharf which was used by the Clarence and Richmond River Steam Navigation Company. The building in the centre is No 1 Sussex Street which was used as offices by the steamship companies. THE RED FILM Gregory Halpern grew up in Buffalo, New York. He currently lives in Rochester, New York. by THE RED FILM Anna Paola Guerra lives and works in Belo Horizonte, Brasil. Lena Grass

Daniel Holfeld Photography Photo Booth April 16, 2014 Portfolio: Cathedrals of Ice This past February, thanks to an unusually cold winter, the sea caves along the Apostle Islands National Lakeshore, in northern Wisconsin, were accessible by foot for the first time in five years. Visitors were able to walk two miles over the thick ice of Lake Superior to see the ice formations that run up the coastline. Erin Brethauer, a photographer living in North Carolina, visited the sea caves. Click here to view a slide show of her photographs. Free Photography Tutorials Flickr Album Maker Latest News A new tool to collect your flickr photos to make your album is available now. With this tool, you can collect photos in Flickr Organize easily and send to Flickr Album Maker. Please see details here. It requires Firefox + Greasemonkey. Version 1.3

Nature Photography / ANTILIMIT Behind The Glass In our modern world where most of us are generally surrounded by and marketed to with uninspiring things, this serves as my attempt to counter that with moments I've found to be interesting and special. I've taken and post-processed all the photos here since 2002. I currently call Austin home and have lived throughout the United States (to include Washington State, Florida, Indiana, Virginia & Texas) during my lifetime. I currently work as a front-end designer and developer during the day and enjoy travelling to new places and wandering around with my gear. Whilst snapping, nothing is ever pre-arranged.

The Year in Pictures