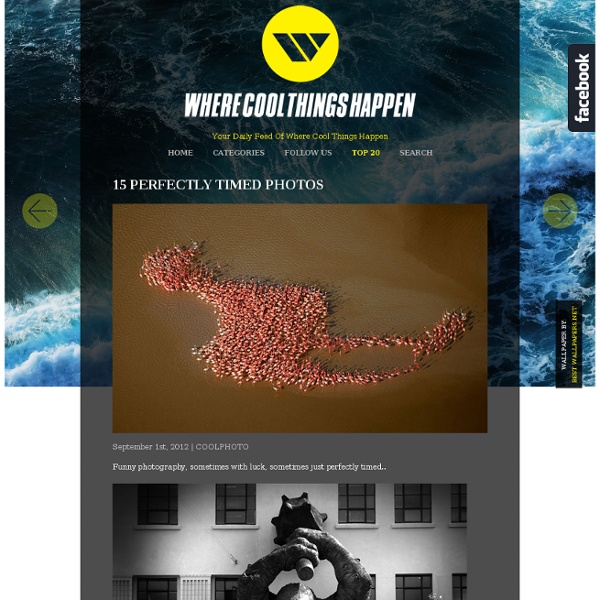 Travel photography, Fashion photography, Documentary photography, Editorial photography, and Portrait Photographers: Feature Shoot Can’t code? No worries—that’s where Webydo comes in. The cloud-based, online website design studio is well on its way to revolutionizing the professional web design industry. Webydo enables web and graphic designers to create fresh, dynamic HTML websites for their clients without writing a single line of code. Some Bizzare and Odd things around us… Beauty of the nature lies in viewer’s eyes. A photograph is just a way to show or represent that beauty. Here is a bunch of some wonderful pictures which are not only the example of beautiful photography but are also a photograph of some miracles happening in the world. You can also call it the creativity and innovation of photographer’s mind.

Dream Worlds Revealed On Canvas Along with some magnificent dreams, Jacek Yerka finds inspiration for his masterful paintings from his childhood memories: the places, remembered feelings and smells of 1950′s Poland. He studied fine art and graphic design before becoming a full time artist in 1980… and we’re glad he did. His paintings will take you through incredible worlds of imagination, bending reality in captivating and clever ways fit to inspire a novel or film. See many more examples of his find paintings at yerkaland.com.

Rare and very interesting photos Interesting and very rare photographs, you may never see. The first McDonald’s. Che Guevara and Fidel Castro. Capital of Brazil, on the beginning. Most Beautiful Villages Around The World photo Popeye Village, is a group of rustic and ramshackle wooden buildings located at Anchor Bay in the north-west corner of the Mediterranean island of Malta. Photo by: Mosin Village on the bank of the Niger river, Mali. Photo by: Yann Arthus-Bertrand Hidden mountain village in Southern China. Adding Color To The Most Iconic Photos In History [to_like id="51475"] [/to_like] From The Web Leave a comment

The Frame: Feature pictures from 2008 As part of our three-day look back at some of best pictures of year, today we look at feature pictures from around the world in 2008. (26 images) In this July 11, 2008 photo, two Chinese girls peek underneath a billboard covering a construction site in Beijing. AP / Oded Balilty 16 Infographic Resumes, A Visual Trend (It’s actually up to 18 now.) A number of designers have attempted to design a visual, infographic resume, and while this is certainly not mainstream (yet), it is gaining some momentum. I wanted to highlight some of the great examples available on the web, but the line between an infographic resume and a designer resume is tough not to cross. I’ve tried to stay true to only infographic versions here, and didn’t include many good illustrated resumes that didn’t include any visualizations. Michael Anderson’s 2008 concept on an infographic resume (above) is probably the most well known. It’s been tweeted, dugg, reddit-ed and featured on FastCompany.com.

National Geographic Photo Contest 2011 National Geographic is currently holding its annual photo contest, with the deadline for submissions coming up on November 30. For the past nine weeks, the society has been gathering and presenting galleries of submissions, encouraging readers to vote for them as well. National Geographic was kind enough to let me choose among its entries from 2011 for display here on In Focus. Gathered below are 45 images from the three categories of People, Places, and Nature, with captions written by the individual photographers. [45 photos] From Flashcards to Freakouts: the Art of Learning Another Language and Not Going Crazy » My Spanish Adventure Here’s the hardest part, hands down, of learning any language, ever. Harder than memorizing tenses. Harder than subjunctive conjugations.

25 Helpful Tutorials for Lighting Effects in Photoshop Photoshop allows designers with unlimited possibilities when it comes to creative effects, including lighting effects. There are plenty of different ways to create lighting effects in Photoshop, and there are equally as many different possible uses for them. If you’re interested in learning more about how to create awesome lighting effects in your own work, here are 25 tutorials that can help. Looking for hosting? WPEngine offers secure managed WordPress hosting. Off the Grid : Eric Valli Cart - 0 items High Himalaya Share A Timeline of Timelines This is an expanded version of a timeline tha­t appeared in Cabinet's "Histories of the Future" issue. Daniel Rosenberg's introduction to the timeline can be found here. Although we have not been able to preserve the horizontal design, we have added additio­nal entries for this web version.

No. Unless by your stuff you mean you took the photos yourself. We all just happened to add this pearl. by bigdaddyksmooth Aug 2

are you guys posting on my stuff? O.o by tonylloyd Aug 2

Yes they are, even when I think the title doesn't fit to every picture. ^^ by tymmo Mar 16