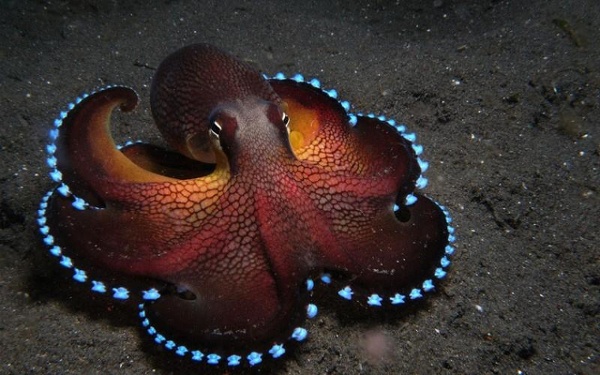 lone hero cares for abandoned animals of Fukushima The untold human suffering and property damage left in the wake of the Fukushima disaster in Japan has been well-documented, but there’s another population that suffered greatly that few have discussed – the animals left behind in the radioactive exclusion zone. One man, however, hasn’t forgotten – 55-year-old Naoto Matsumura, a former construction worker who lives in the zone to care for its four-legged survivors. He is known as the ‘guardian of Fukushima’s animals’ because of the work he does to feed the animals left behind by people in their rush to evacuate the government’s 12.5-mile exclusion zone. He is aware of the radiation he is subject to on a daily basis, but says that he “refuses to worry about it.”

Click on pictue scroll down for videos This flapjack octopus is so cute that it might officially be named “adorabilis.” Specimens of this unnamed octopus have been collected since 1990; now Stephanie Bush, a postdoctoral researcher at the Monterey Bay Aquarium Research Institute in California, said that she is considering the scientific name Opisthoteuthis Adorabilis. Opisthoteuthis is the same genus as Pearl, the pink flapjack octopus in “Finding Nemo.”

Crazy Awesome Paintings by Vladimir Kush Here is a collection of the incredible paintings of Vladimir Kush. Vladimir has been creating these surrealistic paintings since the late 80’s. I’m extremely impressed by his work, and you should be as well! Related Plywood Paintings by Robert Romanowic Plywood Paintings by Robert Romanowic, very unique and awesome! Incredible Nurse Cat From Poland Looks After Other Animals At Animal Shelter Radamenes, an angelic little black cat in Bydgoszcz, Poland, has come through hell and high water to help the animals at the veterinary center there get better. After the veterinary center brought him back from death’s door, he’s returning the favor by cuddling with, massaging and sometimes even cleaning other animals convalescing from their wounds and operations. Radamenes has become a local attraction, and people have begun visiting him at the center for good luck!

This is How Super Smart Octopuses Are The cephalopod’s genome reveals how the creatures evolved intelligence to rival the brightest vertebrates. We humans think we’re so fancy with our opposable thumbs and capacity for complex thought. But imagine life as an octopus … camera-like eyes, camouflage tricks worthy of Harry Potter, and not two but eight arms – that happen to be decked out with suckers that possess the sense of taste. And not only that, but those arms? They can execute cognitive tasks even when dismembered. "Half Drag": The Two Faces of Gender Identity “Half Drag”: The Two Faces of Gender Identity Posted by wildflowa on August 8, 2012 · 22 Comments In photographer Leland Bobbe’s most recent project “Half Drag,” the New York native captures the two identities of the big city’s drag queens.

Maned wolf The maned wolf (Chrysocyon brachyurus) is the largest canid of South America, resembling a large fox with reddish fur. Description[edit] Maned wolf skull The maned wolf bears minor similarities to the red fox, though it should be noted that it belongs to a completely different genus. The adult animal stands 67 to 107 cm (26 to 42 in) tall at the shoulder, averages 125 cm (49 in) in head-and-body length and weighs 20 to 34.09 kg (44.1 to 75.2 lb).[6][7][8] The maned wolf is the tallest of the wild canids. The long legs are probably an adaptation to the tall grasslands of its native habitat.[9] The tail measures 28 to 45 cm (11 to 18 in) in length.[10] Fur of the maned wolf may be reddish brown to golden orange on the sides with long, black legs and a distinctive black mane.

Alien intelligence: the extraordinary minds of octopuses and other cephalopods Inches above the seafloor of Sydney’s Cabbage Tree Bay, with the proximity made possible by several millimetres of neoprene and a scuba diving tank, I’m just about eyeball to eyeball with this creature: an Australian giant cuttlefish. Even allowing for the magnifying effects of the mask snug across my nose, it must be about 60cm (two feet) long, and the peculiarities that abound in the cephalopod family, that includes octopuses and squid, are the more striking writ so large. Its body – shaped around an internal surfboard-like shell, tailing off into a fistful of tentacles – has the shifting colour of velvet in light, and its W-shaped pupils lend it a stern expression. I don’t think I’m imagining some recognition on its part.

Dear Photograph Dear “Dear Photograph”, Thank you for your beautiful blog and for inspiring me to make my own ‘Dear Photograph’ book for my parents as a gift this Christmas. In the process of taking over 400 pictures in the style of your blog, I visited the battered post-Hurricane Sandy New Jersey shoreline where I grew up. I visited preschools,bridges, churches, and grammar schools.

Maned Wolf - Long Legs With Red Fox Head Classified by wildlife experts as a "near threatened" species, the somewhat at risk of being endangered maned wolf is the largest species of canid in all of South America. In the countries of Brazil, Paraguay, Argentina, Bolivia, Peru, and Uruguay, this species known for its long legs and fox-like appearance can be found living in grasslands and other semi-open habitats that contain bushes and trees. Their legs are so long they sometimes appear at a distance like something of a horse with a fox's head. Posing no real danger to humans because of their skittish nature, maned wolves are still imposing looking creatures; standing 42 inches (107 centimeters) tall, and weighing up to 75 pounds (34 kilograms), they are generally larger than most domestic dogs. Despite this size advantage, they're not particularly known for attacking household pets, and in fact are in greater danger from larger family dogs, who have been known to attack them or pass on disease to them.

Earth - Eight reasons why octopuses are the geniuses of the ocean In 2007 I was snorkelling in Dahab, Egypt, when I came face-to-face with a common octopus. It was an intense experience. I felt it was sizing me up, and there was an ill-defined but somehow profound communication. Our meeting only lasted a few seconds, but I was left with an enduring impression of having encountered a great intelligence.