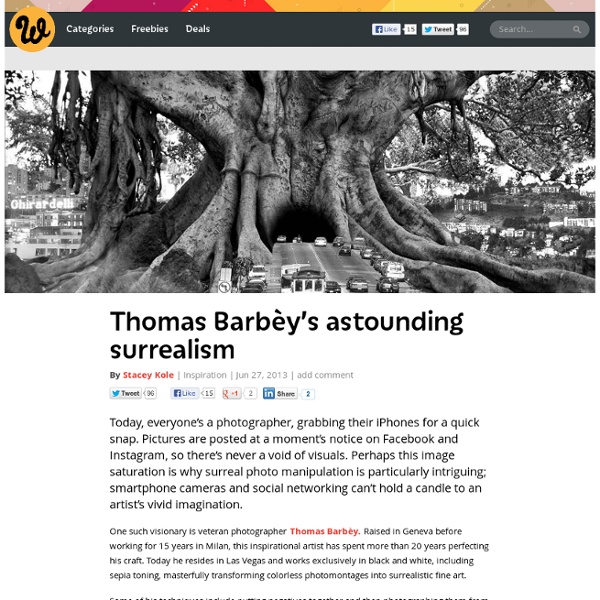 Today, everyone’s a photographer, grabbing their iPhones for a quick snap. Pictures are posted at a moment’s notice on Facebook and Instagram, so there’s never a void of visuals. Perhaps this image saturation is why surreal photo manipulation is particularly intriguing; smartphone cameras and social networking can’t hold a candle to an artist’s vivid imagination. One such visionary is veteran photographer Thomas Barbèy. Raised in Geneva before working for 15 years in Milan, this inspirational artist has spent more than 20 years perfecting his craft. Today he resides in Las Vegas and works exclusively in black and white, including sepia toning, masterfully transforming colorless photomontages into surrealistic fine art. Some of his techniques include putting negatives together and then photographing them from above, along with traditional retouching and photoshopping. Which of Barbèy’s images is your favorite?

Gas Explosion Caught on Camera Funny Videos, Free Games, & Funny Pictures Sign up | Login Gas Explosion Caught on Camera [+] Amazingly, no one was significantly injured. [–] Amazingly, no one was significantly injured. Description: Originally thought to be a car bomb, a gas explosion gets filmed from a dash cam in South Korea. Tags: Explosion, Crazy, Video <div class="highlightRed"><p>Please enable JavaScript. Liquid Nitrogen vs. 1,500 Ping ... Slot Car with Sparkler vs. Playing with Barrels Propane Facility Explodes Guy Stands Too Close to Fire Pumpkin Explodes Guy Throws Can of Axe into Fire... Fireworks Fail Mini Cannon vs. Gas Explosion Caught on Film Backyard Fire Fail Guy Pops Hydrogen and Oxygen Ba... Comments (24) XenomorphByGod | Jul 14, 2013 | Reply Originally posted Jul 13, 2013 Almost looked like a car bomb to me. No, it was from inside the house. Post reply | Sign up | Login Jul 16, 2013 Ho Lee Fuk Aug 21, 2013 The car infronts like lol im doing a barrel roll Jul 17, 2013 i guess they said to them selfs... what do we say to death?

carnovsky RGB Color est e pluribus unus RGB is a work about the exploration of the “surface’s deepness”. RGB designs create surfaces that mutate and interact with different chromatic stimulus. See the Wallpapers collections available: Beautiful Henna Tattoo WARNING: Henna is not supposed to be black! Real henna ranges from orange to chocolate-brown on the skin. Black “henna” is actually a toxic chemical that can cause scarring, and also permanently sensitizes skin to further exposure, causing lifelong, serious allergic reactions to many substances such as hair dyes, sunscreens, and printer ink. The subject of this photo might have disfiguring scars covering her forearms by now.

Isobel Anderson - Black is the Colour Feel the rainbow! Artist Gabriel Dawe is showing his incredible new installation that just opened to the public last October 6 in Como, Italy. As part of Miniartextil, an annual exhibition of contemporary art, Dawe created Plexus no. 19, a stunning thread installation that’s beautifully spread across two balconies in the atrium of a historic villa. The early 19th century neoclassic house, called Villa Olmo, was acquired in 1924 by the municipality of Como and is now open to the public only during cultural events and art exhibitions like this. This year’s Miniartextil exhibition is called Agora, taking from the Greek word that describes an important public place where people come to share ideas. The visitor is invited to not just look at the artwork but to be actively involved in it. The way I see it, if you want the rainbow, you gotta put up with the rain. Chewy VeniceCity of staplesFeather invasionRainbow chaos Like this: Like Loading...

“The Art of Clean Up” by Ursus Werhli « TYPOGRAFFIT : BLOG German artist Ursus Werhli takes obsessive compulsive behavior to a whole new level with his work in completely organizing various objects and situations in clever ways. Here are some selections from his book, “The Art of Clean Up”. (source) This entry was posted on Wednesday, December 11th, 2013 at 05:16:26 PM and is filed under BLOG English, BLOG Japanese . 5 Real-Life Stories of Twins Creepier Than Any Horror Movie Twins get a bad reputation from movies: They are shown as either satanic beings or parent-trapping little brats. Well, this reputation may not be completely unfounded. If you feel bad for being so creeped out by twins, let us share with you some true stories that range from merely weird to downright bone-chilling. #5. Photos.com Swedish twins Ursula and Sabina Eriksson had no history of mental illness and lived normal, happy lives with their respective families. Sabina and Ursula were in Ireland when, for unknown reasons, they hopped on a bus to London without telling anyone. At this point they ran into a group of officers who were being filmed for a COPS-like show for the BBC. As seen in the video, the twins were detained by the cops and appeared calm, until Ursula sprinted onto the highway and ran directly into the wheels of a truck. Sorry, a lorry. The cops hadn't even had time to react when, seconds later, Sabina did the same thing and was struck by a car. That wasn't the end of it.

30 Most popular photography on Reddit I’ve stuck quite a long time making a collection of some of the most popular photography on Reddit all time. I couldn’t find original source of all the photos but they are here meant to inspire. Any Info? Just email it! Came across an overgrown cemetery in the woods by Domestica The black sand beaches of Iceland by Vercify Hiked ten miles into the Grand Canyon for this by ibeardown Tower Bridge this morning by mapryan Probably the New world record of the biggest wave surfed. Dag walker in NY My brother waited out 4 hours in a swampy rainforest to capture a shot of this rare kingfisher. Props to the photographer by owl_93 The Grand Canyon seen from space by AMMOrape National Geographic Travelers Best Photos of 2013 My picture of the Patagonian mountains was rudely interrupted by experience_life Sunrise over the ancient city of Bagan – Myanmar by Goldmine44 Palangan Village, in the mountains near the Iraq border. Just showing some love to an underrated state.

Smoothie Recipes For Everything - Blog About Infographics and Data Visualization Who knew that the solution to most our problems could be solved with a smoothie?! Smoothie Recipes For Everything infographic from Super Skinny Me gives you the ingredients and visually represents the amount of each that should put in. Trying to lose weight? Is there anything as versatile, adaptable and convenient as a smoothie? The major issue I have with this design is that the proportions visualized for each smoothie aren’t accurate to the recipe. Also, the actual amounts of each ingredient aren’t shown. Found on superskinnyme.com