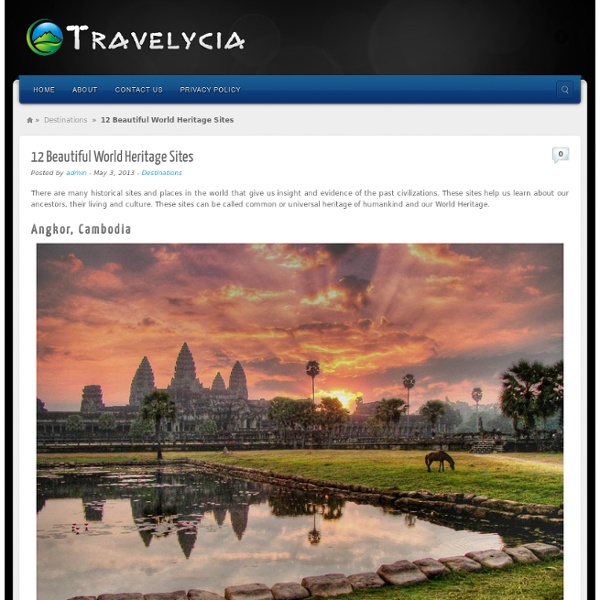 Some Bizzare and Odd things around us… Beauty of the nature lies in viewer’s eyes. A photograph is just a way to show or represent that beauty. Here is a bunch of some wonderful pictures which are not only the example of beautiful photography but are also a photograph of some miracles happening in the world. You can also call it the creativity and innovation of photographer’s mind. I think it was at the peak while taking these pictures. Some photographs are just the example of wonder created by God. Most Beautiful Villages Around The World photo Popeye Village, is a group of rustic and ramshackle wooden buildings located at Anchor Bay in the north-west corner of the Mediterranean island of Malta. Photo by: Mosin Village on the bank of the Niger river, Mali.

In Hours, Thieves Took $45 Million in A.T.M. Scheme It was a brazen bank heist, but a 21st-century version in which the criminals never wore ski masks, threatened a teller or set foot in a vault. In two precision operations that involved people in more than two dozen countries acting in close coordination and with surgical precision, thieves stole $45 million from thousands of A.T.M.'s in a matter of hours. In New York City alone, the thieves responsible for A.T.M. withdrawals struck 2,904 machines over 10 hours starting on Feb. 19, withdrawing $2.4 million. Photographer's Girlfriend Leads Him Around the World My Modern Metropolis Photographer's Girlfriend Leads Him Around the World Photographer Murad Osmann creatively documents his travels around the world with his girlfriend leading the way in his ongoing series known as Follow Me To.

34 Lost Cities Forgotten by Time It’s hard to imagine how an entire city can get lost but that’s exactly what has happened to the lost cities on this list. There are actually many reasons why a city has to be abandoned. War, natural disasters, climate change and the loss of important trading partners to name a few. Whatever the cause, these lost cities were forgotten in time until they were rediscovered centuries later. 34Carthage Located in present-day Tunisia, Carthage was founded by Phoenician colonists and became a major power in the Mediterranean.

Glen Brittle Fairy Pools Glen Brittle is actually a huge glen on the southern part of the Isle of Skye, Scotland. Numerous tributaries of the Brittle go down from all of these mountain tops to the glen, together with a stream along with falls referred to as Fairy Pools, a well-known spot to take a stroll. They’re section of a flow going off of the Cuillin mountain range, filled with clearly hued pools of virtually still water that are interspersed with hectic waterfalls. The 15 Craziest Things In Nature You Won't Believe Actually Exist Mother Nature is beautiful and amazing because we can see many amazing stuff like these 15 things that you won’t believe they actually exist. All these places are real. It is hard to believe in that, but that is true. 1. Volcanic lightning aka “dirty thunderstorms.”

About The Story Collider About the Story Collider We podcast one story a week. You can listen here, or subscribe on iTunes, or follow us on SoundCloud. We host events monthly in New York city, regularly in Boston and occasionally elsewhere. See the list of upcoming shows here. If you'd like to have us organize an event at your University or elsewhere send us a note.