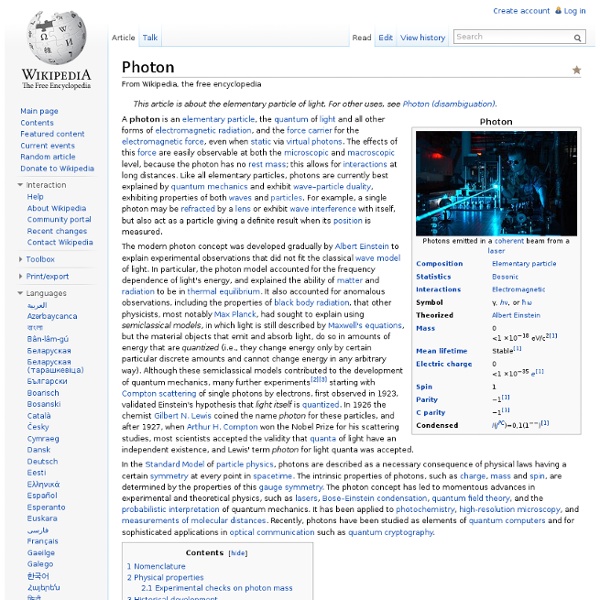 Nomenclature[edit] In 1900, Max Planck was working on black-body radiation and suggested that the energy in electromagnetic waves could only be released in "packets" of energy. In his 1901 article [4] in Annalen der Physik he called these packets "energy elements". The word quanta (singular quantum) was used even before 1900 to mean particles or amounts of different quantities, including electricity. Later, in 1905, Albert Einstein went further by suggesting that electromagnetic waves could only exist in these discrete wave-packets.[5] He called such a wave-packet the light quantum (German: das Lichtquant). The name photon derives from the Greek word for light, φῶς (transliterated phôs). Physical properties[edit] The cone shows possible values of wave 4-vector of a photon. A photon is massless,[Note 2] has no electric charge,[13] and is stable. Photons are emitted in many natural processes. Since p points in the direction of the photon's propagation, the magnitude of the momentum is

Bacteria Bacteria ( Most bacteria have not been characterized, and only about half of the phyla of bacteria have species that can be grown in the laboratory.[11] The study of bacteria is known as bacteriology, a branch of microbiology. Etymology Origin and early evolution Bacteria were also involved in the second great evolutionary divergence, that of the archaea and eukaryotes. Here, eukaryotes resulted from the entering of ancient bacteria into endosymbiotic associations with the ancestors of eukaryotic cells, which were themselves possibly related to the Archaea.[23][24] This involved the engulfment by proto-eukaryotic cells of alphaproteobacterial symbionts to form either mitochondria or hydrogenosomes, which are still found in all known Eukarya (sometimes in highly reduced form, e.g. in ancient "amitochondrial" protozoa).

Diffraction Limited Photography: Pixel Size, Aperture and Airy Disks Diffraction is an optical effect which limits the total resolution of your photography — no matter how many megapixels your camera may have. It happens because light begins to disperse or "diffract" when passing through a small opening (such as your camera's aperture). This effect is normally negligible, since smaller apertures often improve sharpness by minimizing lens aberrations. However, for sufficiently small apertures, this strategy becomes counterproductive — at which point your camera is said to have become diffraction limited.

Wave–particle duality Origin of theory[edit] The idea of duality originated in a debate over the nature of light and matter that dates back to the 17th century, when Christiaan Huygens and Isaac Newton proposed competing theories of light: light was thought either to consist of waves (Huygens) or of particles (Newton). Through the work of Max Planck, Albert Einstein, Louis de Broglie, Arthur Compton, Niels Bohr, and many others, current scientific theory holds that all particles also have a wave nature (and vice versa).[2] This phenomenon has been verified not only for elementary particles, but also for compound particles like atoms and even molecules.

International System of Units For a topical guide to this subject, see Outline of the metric system. The seven base units in the International System of Units The system was published in 1960 as the result of an initiative that started in 1948. It is based on the metre-kilogram-second system of units (MKS) rather than any variant of the centimetre-gram-second system (CGS).

Lens Genealogy LENS GENEALOGY Part 1by Roger Cicala Where do new lens designs come from?I knew that today’s lenses are all designed using computer programs, but I was surprised to find new lenses aren’t designed from scratch. Designers start with an existing lens design and modify it. Of course, a lens designer doesn’t say “this lens really sucks, let’s use it as our starting point”. Thermal radiation This diagram shows how the peak wavelength and total radiated amount vary with temperature according to Wien's displacement law. Although this plot shows relatively high temperatures, the same relationships hold true for any temperature down to absolute zero. Visible light is between 380 and 750 nm. Thermal radiation in visible light can be seen on this hot metalwork.

File:Binary Fission 2.svg Cancel Edit Delete Preview revert Text of the note (may include Wiki markup) Could not save your note (edit conflict or other problem). Please copy the text in the edit box below and insert it manually by editing this page. Upon submitting the note will be published multi-licensed under the terms of the CC-BY-SA-3.0 license and of the GFDL, versions 1.2, 1.3, or any later version. DSLR Magnification By: Nick Rains We live in ‘interesting times’. Not since colour film was introduced has so much controversy raged about photography. The Internet has allowed vast global discussions to ebb and flow like never before and whilst this is great in some respects, the downside is that there is a whole lot of misinformation floating around.

Absolute zero Absolute zero is the lower limit of the thermodynamic temperature scale, a ficticious state at which the enthalpy and entropy of a cooled ideal gas reaches its minimum value, taken as 0. The theoretical temperature is determined by extrapolating the ideal gas law; by international agreement, absolute zero is taken as −273.15° on the Celsius scale (International System of Units),[1][2] which equates to −459.67° on the Fahrenheit scale (English/United States customary units).[3] The corresponding Kelvin and Rankine temperature scales set their zero points at absolute zero by definition. The laws of thermodynamics dictate that absolute zero cannot be reached using only thermodynamic means,[clarification needed] as the temperature of the substance being cooled approaches the temperature of the cooling agent asymptotically. A system at absolute zero still possesses quantum mechanical zero-point energy, the energy of its ground state. The kinetic energy of the ground state cannot be removed.