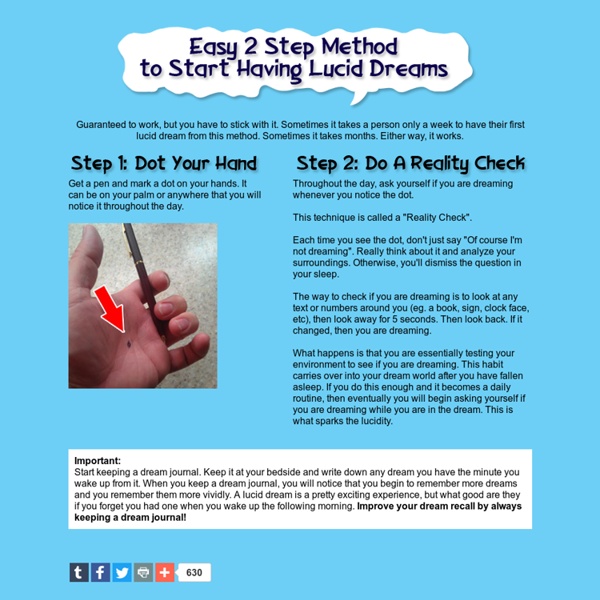 Throughout the day, ask yourself if you are dreaming whenever you notice the dot. This technique is called a "Reality Check". Each time you see the dot, don't just say "Of course I'm not dreaming". Really think about it and analyze your surroundings. Otherwise, you'll dismiss the question in your sleep. The way to check if you are dreaming is to look at any text or numbers around you (eg. a book, sign, clock face, etc), then look away for 5 seconds. What happens is that you are essentially testing your environment to see if you are dreaming.

15 Truly Bizarre Mental Delusions Here are 15 of the most bizarre syndromes to be documented since that time. . . 1. Capgras Delusion In the heat of an argument it’s normal to want to disown your parents or kids, but for the sufferer of Capgras delusions that feeling never goes away. It’s commonly caused when the “wire” that connects the visual section of the brain to the emotional section is damaged. How-To: Easily Remove the Vocals from Most Songs 2015 Shortcut: When I wrote this article Audacity didn’t have an automatic center-panned vocal canceling effect… but now it does, so rather than do the stereo-separate / invert-one-track / play-both-as-mono trick (and that’s pretty much all there is to it), you should be able to find the Vocal Remover option in the Effects menu – but it’s more fun / interesting and can give better results if you do it yourself! =D I found this trick the other day whilst stumbling the Interwebs and thought I’d do a quick-write up w/ pictures to make it as easy as possible… For this exercise we’re going to be using a piece of free audio software called Audacity, which you can get for Linux, Windows and Mac. Update: If you’re trying this out on a Mac, please make sure you get Audacity 1.3 Beta or newer – the stable 1.2 version appears to have a missing equaliser decibal-range slider which you need towards the end of the process! 1.) Import Some Audio

Earth: Landscapes That Will Blow Your Mind “We are the children of our landscape; it dictates behavior and even thought in the measure to which we are responsive to it” (Lawrence Durrell). Presenting a collection of some of the most amazing shots we’ve came across. Stay tuned in for more of these in the future. Evil Forces by Skarphedinn Thrainsson Namib by Daniel Montero World's most famous traffic outlaw giving away his 499-horsepower turbo motorcycle Of all the colorful characters in the motorcycle world, few polarize opinion as strongly as Sweden's mysterious "Ghost Rider." It's not hard to see why - with five DVDs full of heinous traffic law violations, including 300 km/h (180 mph) wheelies, police baiting and near-suicidal top speed time trials around the Swedish freeway system, he's probably the most famous flaunter of road rules the world has ever seen. And now, his most famous steed, a 499-horsepower turbocharged, naked Hayabusa, is being given away through a website lottery. Only ridden to church on Sundays, it's the perfect practical getabout to take down to the shops. View all

Incredible Things - Part 7 Here is a series of skulls sculpted (OMG SKULLPTURES?!) from fruits and vegetables. They were made by a Russian artist called Dimitri Tsykalo, and every one of these is totally edible. NOM. The Top 10 Psychology Studies of 2010 The end of 2010 fast approaches, and I'm thrilled to have been asked by the editors of Psychology Today to write about the Top 10 psychology studies of the year. I've focused on studies that I personally feel stand out, not only as examples of great science, but even more importantly, as examples of how the science of psychology can improve our lives. Each study has a clear "take home" message, offering the reader an insight or a simple strategy they can use to reach their goals , strengthen their relationships, make better decisions, or become happier. If you extract the wisdom from these ten studies and apply them in your own life, 2011 just might be a very good year.

60 Inconvenient Personal Development Truths I know you want to be the best you can be. We all do. But sometimes we look for success in the wrong places or we try to achieve it in the wrong ways. Barcode Yourself by Scott Blake Barcode Yourself is a complete, interactive experience in the series of barcode art, created using the personalized data of participants. Enter an individual's gender, weight, height, age and location, and the barcode is formed using real-world data. The individualized barcode can then be printed, mapped, scanned, even depicted on a t-shirt or coffee mug. Uber-geeks can even test out their barcodes on their next grocery run.

Sketchbook Secrets: 50 Beautiful Sketchbook Scans The sketchbook is—to borrow a term from the new millenniums’ popular discourse—an artist’s BFF. It’s a diary for the visually inclined—a place where artists can most comfortably explore their personal thoughts, work out their visual needs, practice, maintain a visual history, and hopefully create the unpolished work that will eventually lead to amazing work for the world to see. But, sometimes, when we’re lucky, we get to see the process.