What I Learned from 50 Naked People - 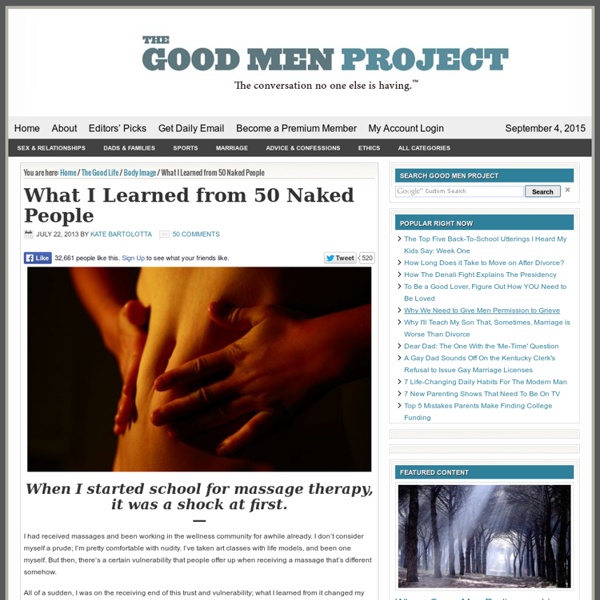 The Effects Of Negative Emotions On Our Health Humans experience an array of emotions, anything from happiness, to sadness to extreme joy and depression. Each one of these emotions creates a different feeling within the body. After all, our body releases different chemicals when we experience various things that make us happy and each chemical works to create a different environment within the body. For example if your brain releases serotonin, dopamine or oxytocin, you will feel good and happy. What about when we are thinking negative thoughts all the time? Positive vs. Is there duality in our world? Cut The Perceptions As Much As Possible After thinking about it for a moment you might realize that there are in fact no positive or negative experiences other than what we define as such. “If someone wishes for good health, one must first ask oneself if he is ready to do away with the reasons for his illness. Mind Body Connection Source : You Have The Power Sources:

Your Tears Hold Emotions at the Microscopic Level Remember back when we talked about water? Do you remember Dr Emotos studies about how sensitive water is when emotions are projected onto it? Well a photographer named Rose-Lynn Fisher captured photographs of tears at microscopic levels and she found out something that will blow your mind! First of all if you haven’t seen Spirit Science 20, check it out here now! According to various studies there are three types of tears. Basal tears are the natural tears produced in the eyes to lubricate the eye and keep it clear of dust. Rose-Lynn Fisher took electron microscopic pictures of different types of dried tears and once you see these pictures you will see right away that there is a big difference between the different emotions projected onto the water of the tears. Tears of Change Tears of change, photo © Rose-Lynn Fisher, courtesy of the artist and Craig Krull Gallery, Santa Monica, CA Tears of Grief Tears of Ending and Beginning Tears of Laughter Orion Tears Basel Tears Isn’t that powerful?

Mãe Nutricionista Reprogramming Your Junk DNA Every now and then I come across a stunning example of pseudoscience, an exemplar, almost raising pseudoscience to an art form. Some pieces of scientific nonsense read almost like poetry. Such examples make me wonder what is going on in the mind of the pseudoscientist – to me, the most fascinating question. One example I recently came across is the idea that we can reprogram our DNA through words alone. Only 10% of our DNA is being used for building proteins. The 10% figure reminds me of the trope that we only use 10% of our brains (which is completely untrue). As a very interesting aside, the concept of Junk DNA has recently had some controversy. From the beginning of the concept of non-coding DNA, however, geneticists knew that some non-coding regions were involved in regulating gene expression. Recently the ENCODE project has sought to discover how much of the genome has function. As a further aside, creationists have keyed in on this debate for their own purposes.

Science Theory Shows We Can Reprogram Our DNA to Heal Ourselves with Vibration As though to confirm the hunch many of us had that our ‘junk’ DNA was anything but disposable, researchers from the Gene and Stem Cell Therapy Program at Sydney’s Centenary Institute have proven that 97 percent of human DNA programs or encodes proteins in our bodies. One of the researchers involved in this study said, “this discovery, involving what was previously referred to as “junk,” opens up a new level of gene expression control . . .” This also means there are multiple modalities that mainstream science has yet to give a nod to, which just might re-train or reprogram our DNA — even cells which have become cancerous or are mutilated by the onslaught of toxins in our environment and negative emotional baggage which has been proven to have an undesirable impact on health. Chaos theory states that chaotic appearances are just a very complex system affected by very subtle changes in an almost infinite array of varying possibilities. Russian linguists, Dr. Like this article?

The Healing Power of Cat Purrs Those crazy cat ladies might be onto something. According to today’s infographic, our feline friends provide us with more than just emotional support. House cats may actually be contributing to our physical well-being. When a cat purrs within a range of 20-140 Hertz, nearby humans may be therapeutically benefiting from these vibrations. Pet therapy is apparently gaining momentum in many medical communities, and according to Animal Planet’s website, there is scientific research that suggests pet owners live longer than those without pets. It seems that our own animals have the ability to relieve us of our troubles, or at least make our worries seem less important. So, if you’re trying to convince Mom and Dad to let you get a kitty, go show them this infographic, and stop by your local animal shelter! Share This Infographic Get Free Infographics Delivered to your Inbox

Scientists Discover Children’s Cells Living in Mothers’ Brains The link between a mother and child is profound, and new research suggests a physical connection even deeper than anyone thought. The profound psychological and physical bonds shared by the mother and her child begin during gestation when the mother is everything for the developing fetus, supplying warmth and sustenance, while her heartbeat provides a soothing constant rhythm. The physical connection between mother and fetus is provided by the placenta, an organ, built of cells from both the mother and fetus, which serves as a conduit for the exchange of nutrients, gasses, and wastes. Cells may migrate through the placenta between the mother and the fetus, taking up residence in many organs of the body including the lung, thyroid, muscle, liver, heart, kidney and skin. It is remarkable that it is so common for cells from one individual to integrate into the tissues of another distinct person. Microchimerism is the persistent presence of a few genetically distinct cells in an organism.