How to Heal Cavities Naturally 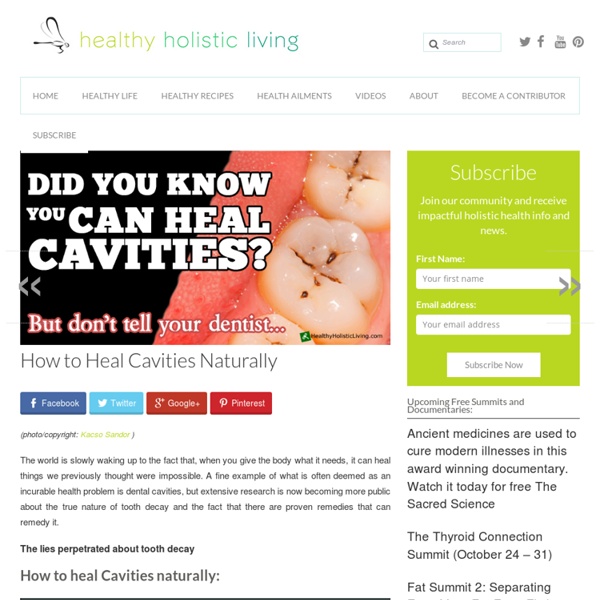 (photo/copyright: Kacso Sandor ) The world is slowly waking up to the fact that, when you give the body what it needs, it can heal things we previously thought were impossible. A fine example of what is often deemed as an incurable health problem is dental cavities, but extensive research is now becoming more public about the true nature of tooth decay and the fact that there are proven remedies that can remedy it. The lies perpetrated about tooth decay How to heal Cavities naturally: According to the American Dental Association, the reason we have tooth decay is as follows: “[Tooth decay] occurs when foods containing carbohydrates (sugars and starches) such as milk, pop, raisins, cakes or candy are frequently left on the teeth. There are a few problems with this theory, including: So if the modern explanation of tooth decay is not accurate, what is actually the cause of tooth decay? What actually causes tooth decay Tooth decay, as researched by Dr. Foods to focus on are: Derek Henry

Photographic Proof That Cavities Heal The compelling article written by Dr. Judene Smith DDS recently about how cavities heal really brought out the conventional dentists in droves! It has been awhile since I had to delete so many nasty, insulting, even threatening comments from a single blog post! A sad testament indeed to how closed-minded and condescending a large portion of the dental community can be even toward one of its own. The truth is that cavities can heal and the vehement denial by conventional dentists who react in a defensive manner (as if they have all the answers) does not change this fact one iota. To drive another nail in the coffin of the notion that cavities must be filled and can’t remineralize and heal on their own, I am presenting a series of photographs sent to me by Rami Nagel, author of the paradigm shattering book Cure Tooth Decay. The photos are of an 18 month old child from Baton Rouge, Louisiana. What Did This Child Eat That Caused These Cavities? Foods That Healed this Child’s Teeth Picture Credit

Cape Malay Tomato Bredie We are talking Soccer and South African Cape Malay cuisine in this post. If you are a soccer fan,you might already know South Africa is the honored host of World cup Soccer 2010.Soccer runs in my family,I was no Mia Hamm,but was deeply influenced by the game from my daddy dearests soccer passion.He had immense skill at the game, played for his school team,that gave him an athletic persona.He continues his passion ,follows the world cup series closely.I remember the nights he stayed awake ,when the world cup games were aired at odd mid-night hours.The passion is passed on to my son Nabeel,who is beginning to show interest in the game.I get the title of soccer mom,for being there for all his games,rain or shine.I also love practicing the game with him,not to mention,gives me a good work out. *Vegetarians could use 2 cups of Soy nuggets(available in Asian stores),lessen the cooking time. The recipe is my contribution for Meeta's Monthly Mingle : South African Cuisine.

How to See Auras - California Psychics Blog Tao of Lakota, North Dakota asks: How does anybody really “see” auras? My own opinion is that auras are physiological rather than spiritual, but I’m fascinated to understand more. Psychic Marin responds: Martha Graham, an American dancer, choreographer and pioneer of modern dance in the 1920s, was able to capture the essence of the human aura, describing it as a vitality, a life force, and an energy that is translated through you into action. Because there is only one “you,” this energetic expression will always be unique. From a scientific perspective, an aura is the energy field that surrounds the human body, or any matter composed of an atomic structure. Within our atomic structure are positive and negative charges that interact with one another. The crown chakra, the energy source located at the top of our head, is the origin of the aura. When you imagine an angel, do you instantly visualize a figure with a halo above its head? Developing your ability to see auras1. 2. 3. 4. 5. 6. 7.

8 Health Warnings Your Fingernails May Be Sending | Earth. We are one. Your eyes may be the window to your soul, but, in many ways your, nails are the window to what’s going on inside your body. Here are some common nail problems and what they mean: Take a good look at your fingernails and you may notice subtle variations in the texture or color; white spots, a rosy tinge, rippling or bumps in the surface to mention a few. These imperfections may not look like much to you, but it’s more important than you might think to maintain healthy fingernails. That’s because to the trained eye, nails can provide valuable indications about your overall health. Hold a hand level with your nose about a foot out from your face and scrutinize each one. Learn the difference between an injury related imperfection which should not last too long, and a potential disease related imperfection which will not clear up. 5. •AIDS Most of these health issues will often have already given you other symptoms but the corresponding nail condition can help with diagnosis. 8.

Fork Spoon Knife: A Taste of South Africa - Tomato Bredie This Tomato Bredie photo was featured in Brazilian Magazine blog, Verdemar - Copa de Sabores: África do Sul One of my favorite book series is the No. 1 Ladies Detective Agency series writted by Alexander McCall Smith, a Zimbabwe born, Scottish writer. The stories are set in Botswana, the country to the North of South Africa, and the lead character is a traditionally built Botswanian woman, Mma Ramotswe, who, assisted by her bright secretary, Mma Makutsi, sets up the first and only detective agency in the country run by women. They solve the problems that are brought to them using a combination of womanly intuition and insight, backed by advice from the fictional Clovis Andersen's book The Principles of Private Detection and many many cups of African bush tea. Anyway, the reason I brought that book up is that it was the first thing that came to my mind, when I saw Meeta's Monthly Mingle theme. Botswana is South Africa's neighbour and I thought that there must be shared cuisine. 1 T butter

The Mind Unleashed: Sex and Aural Energy Pay attention to whom you share your intimate energy with. Intimacy at this level intertwines your aural energy with the aural energy of the other person. These powerful connections, regardless of how insignificant you think they are, leave spiritual debris, particularly within people who do not practice any type of cleansing, physical, emotional or otherwise. The more you interact intimately with someone, the deeper the connection and the more of their aura is intertwined with yours. Imagine the confused aura of someone who sleeps with multiple people and carries around these multiple energies? “I always say, never sleep with someone you wouldn’t want to be” - Lisa Chase Patterson I believe the original author of the above passage is Lisa Chase Patterson. We are all physical beings, but we are also so much more than that, including ‘energetic beings’. If you have sex with positive, loving, uplifting people – that wonderful energy is absorbed and uplifts you. Cleansing your Aura Swimming

Beefless Finger Licking Stew | The Elated Vegan You will love this! Miriam has veganised one of her mother’s rich, full colour and flavour Greek specialities into a luscious, warming and hearty vegan stew which will have you licking your fingers! This is also an excellent child-friendly dish. Ingredients STEW olive oil 2 medium sized white onions 2 to 3 cloves garlic 2 Tbsp tomato paste 3 to 4 cups of water 1½ Tbsp plain flour 1 to 2 tsp vegan margarine 3 medium sized carrots, chopped 2 medium sized potatoes, chopped 1 green apple, peeled, cored and chopped 2 bay leaves the zest of a lemon a little rosemary ½ cup red wine, or unsweetened red grape juice 1 tsp dried stock granuleschopped cooked spinachcracked black pepper salt to taste BEEFLESS MEAT For your 1 cup beefless meat, choose one of the following: Method In a food processor, mince the onions and garlic in your food processor, or chop them finely. Meanwhile, heat up some oil in a casserole pan, add the onions and garlic, and fry gently. Preheat your oven to 300ºF (150ºC).

10 Psychology Tricks You Can Use To Influence People Before we get started, it’s important to note that none of these methods fall under what we would term the dark arts of influencing people. Anything that might be harmful to someone in any way, especially to their self esteem, is not included here. These are ways to win friends and influence people using psychology without being a jerk or making someone feel bad. Trick: Get someone to do a favor for you—also known as the Benjamin Franklin effect. Legend has it that Benjamin Franklin once wanted to win over a man who didn’t like him. He asked the man to lend him a rare book and when the book was received he thanked him graciously. Scientists decided to test this theory and found that those who were asked by the researcher for a personal favor rated the researcher much more favorably than the other groups did. Trick: Ask for way more than you want at first then scale it back later. This trick is sometimes known as the door in the face approach. Trick: Mirror their behavior.