The 13 Coolest Tattoo Artists In The World 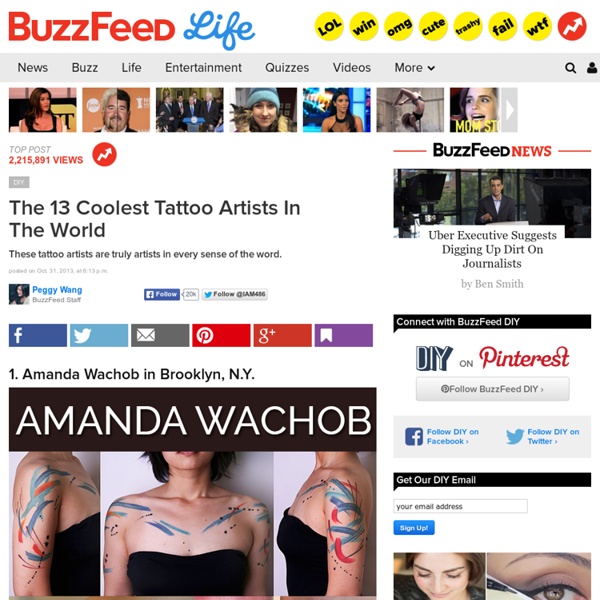 Works of Art by Tattoo Artist Dr. Woo Most Beautiful Mehndi Designs 6K views 532 days ago by DezineGuide Mehndi is the application of henna as a temporary form of skin decoration in India, Pakistan and few other countries. Like Dislike 0 points Vote: 18 Things Highly Creative People Do Differently This list has been expanded into the new book, “Wired to Create: Unravelling the Mysteries of the Creative Mind,” by Carolyn Gregoire and Scott Barry Kaufman. Creativity works in mysterious and often paradoxical ways. Creative thinking is a stable, defining characteristic in some personalities, but it may also change based on situation and context. Inspiration and ideas often arise seemingly out of nowhere and then fail to show up when we most need them, and creative thinking requires complex cognition yet is completely distinct from the thinking process. Neuroscience paints a complicated picture of creativity. And psychologically speaking, creative personality types are difficult to pin down, largely because they’re complex, paradoxical and tend to avoid habit or routine. While there’s no “typical” creative type, there are some tell-tale characteristics and behaviors of highly creative people. They daydream. According to Kaufman and psychologist Rebecca L. They observe everything.

Tattoo Ideas for Men & Women Tattoo Ideas Vol 1 Here’s a great collection of tattoo ideas for men, women, boys and girls! I’m a big fan of tattoos and always on the lookout for a great idea I can use for my next one, hopefully you might get inspired too! A great place to start searching for tattoo ideas is pinterest where you’ll find masses of weird & wonderful tattoos. See more tattoo ideas, urban & street art and catch up with me on google plus here – Mr Pilgrim Street Artist

The Art of Mehndi - Making Your Own Cones for Applying Henna Paste Henna paste can be applied several different ways. Some use a toothpick and carefully place the design on bit by bit. Some use little squeeze bottles and apply it in smooth lines. What You Will Need: Small freezer bags - one will make 2 cones Scissors Scotch tape Twist ties Step One: Cut the freezer bag into squares The size you make the cones is up to you, but you don't want it too big or it will be hard to handle. Step Two: Make a funnel shape out of the square This is not as easy as it sounds. Step Three: Taping the cone After you get the funnel exactly how you want it, you will need to tape along the side edges where the plastic overlaps. Step Four: Filling the cone Now you will want to put your prepared henna paste in the cone. Step Five: Closing the cone One who is experienced in using the cones (or even in using decorating bags) can usually just twist the end of the cone and apply the paste. And that's it! Next page > Part 4: Creating your Own Patterns & Designs > Page 1, 2, 3, 4

Meditation For People Who Don't Meditate (A 12-Step Guide) Congratulations! You want to meditate, but you’re not sure what to do. If you’re one who can’t handle too much esoteric sweetener in your spiritual coffee, here's a great guide to starting up a meditation practice from scratch. The benefits of meditation can be easily outmatched by the frustration of actually trying to meditate. 1. Do you really want this? 2. Wipe away eye-crusties. 3. This could be in a chair or cross-legged on the floor, hips permitting. 4. ... The point is to focus awareness, not shut it down. 5. Inhale, roll the shoulders up to your ears. Every time you feel yourself hunching forward or slumping, reset your spinal situation with this inhale/exhale rolling shoulder magic. 6. Duh. 7. No rush or pause. Focus on the area between your nostrils and your upper lip. It may seem easy, but the mind often wanders in pursuit of everything else. 8. There are days when closing my eyes is like flipping over an old log. 9. 10. When they arrive, avoid holding on. 11. 12. Start small.

Tattoos: Addicted to the Needle Humans have been marking their skin permanently for thousands of years. A tattoo can be a remembrance, a constant prayer, a warning, or simply an amazing work of art. The reasons behind it can be intensely personal, decorative, whimsical, or utilitarian. It can signify tribal allegiance, life history, or nothing at all. Collected below are recent images of skin art and a few glimpses into the owners of these tattoos and their reasons for modifying their own bodies. [36 photos] Use j/k keys or ←/→ to navigate Choose: Artwork on the back of Yi-jun, shown during the 2010 Taiwan International Tattoo Convention in Taipei, on July 31, 2010. US Army soldier Michelle Byrnes from the HHB 3-7 Field Artillery Regiment 3rd Bct 25th ID scans fingers of an Afghan man with Automated Biometric Identification System during a mission in Turkham Nangarhar, Afghanistan, on September 28, 2011. Pathologist Dr. Artist Vincent Myers tattoos Wendy, age 72, in his shop in Finksburg, Maryland, on March 21, 2012.

Otaku About Otaku (おたく/オタク) is a Japanese slang term used to describe someone who has obsessive interests in specialized subcultures and hobbies, particularly in regard to anime, manga, pop idols and video games. With the international success of Japanese cultural imports, the term has gained recognition among manga/anime/j-pop fans overseas. In English, it is usually used to refer to an obsessive fan of anime/manga and/or Japanese culture generally, and to a lesser extent Japanese video games. Online History While the term “Otaku” is somewhat comparable to the Western-derived word “Maniakku” (literally meaning maniac), the nuance of “Maniakku” is significantly softer and less likely to cause offense than “Otaku”. Reception [researching] Subtypes of Otaku-dom anime/manga otaku (fan of anime / comic books) cosplay otaku (fan of anime character costumes) gēmu otaku (fan of playing video games) wota or idol otaku (fan of Japanese teen idols) tetsudō otaku or denshamania (railfans)

15 Beliefs That Are Keeping You Unhappy We often tell ourselves stories about our lives, our goals and our dreams. We put so much urgency into these stories that often they morph into rigid rules. This habit can hold us back from embracing change and growth. To make matters worse, these stories are often secret; they're seldom doubted, questioned, or overhauled. They keep us stuck and unhappy because they prevent us from being vulnerable and therefore authentic. Once I realized the stories I told myself and said them out loud, I began to unravel them, and was able to replace restriction and rigidity with freedom and fluidity. Here are the 15 things that I used to believe that kept me stuck and unhappy. 1. The way it actually works is the reverse: I need pleasure (lots of it!) 2. There was a time in my life when I told myself that unless I ate salad for at least one meal a day, I would gain lots of weight and be forever unhappy. 3. The fact is that with the internet at our fingertips, there's endless amount of information. 4.

Mehndi, lace painted with henna Mehndi, even this procedure is called “henna tattoo” became fashionable in the West, thanks to movie stars and models recently – at the end of the 1990s.Unlike real tattoos, which is for life, henna lasts up to three weeks Mehndi is a form of ceremonial art that originated in ancient India in the XII century. The use of mehndi is described in the earlier Vedic ritual books. 20 Inspired Foot Mehndi Designs - Stylish and Trendy In most of the Asian country, Mehndi is one of the vital part of the culture. Today, Mehendi design on the foot is as common as on the palm. There are numbers of Mehendi design available for feet. To make the design perfectly and eye catching, cones are utilized to apply the black henna paste which makes a reddish brown mark on your skin. Here is a list of some best foot mehendi designs for you 1. This is one of the simple Mehendi designs for feet. 2.Simple Flowerry Mehendi Designs for your foot with green and red glitter Today, most of the Mehendi design is complicated as well as elaborate, so there is a great demand for simple design. Related: Top 20 Eye Catching Leg Mehndi Designs 3.An Elaborate Foot Mehndi Design: Beautiful flowers, detail, intricate curves and also various pattern make this design more graceful which starting from toe and travel up your feet, up to toe. 4.Simple but gorgeous foot Mehendi design: 5. 6.Red Coloured Foot Mehendi Designs: 7. 8.Black Mehendi design 10. 11.

14 Ways To Create The Best Relationship Of Your Life After 30 years of working with couples and researching how people repaired their relationships, I suddenly realized that we had really reached a pivotal moment; all our studies, stories, and the science had come together, and we were in the midst of a revolution—a new way of truly understanding romantic love. Finally we can grasp the laws of love—and they make sense! We have cracked the code of love and have found the pathway to the relationships we long for. You can create a fulfilling, safe-haven relationship, restoring the romantic love bond, beginning now: 1. Abandon the out-of-date idea that love is something that just happens to you. All the new science tells us that romantic love is no longer a mystery. 2. Accept that you are a mammal and that love is an ancient, wired-in survival code. 3. The bonds of love offer us a safe haven where we can take shelter and regain our emotional balance. 4. 5. Can each of you reach out for the other? 6. 7. 8. 9. Keep it simple and concrete. 10.