How Photos Fuel the Spread of Fake News 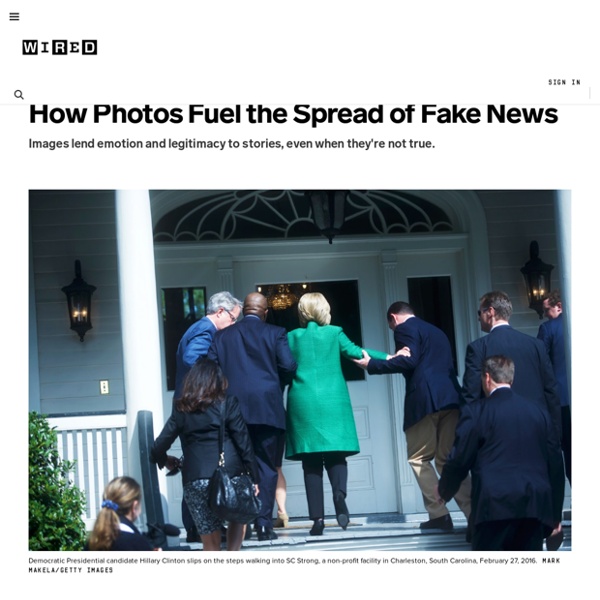 During a campaign stop in South Carolina last winter, Hillary Clinton stumbled as she climbed the steps of an antebellum mansion in Charleston. Aides helped her regain her balance in a vulnerable but nondescript moment captured by Getty photographer Mark Makela. He didn’t think much of it until August, when the alt-right news site Breitbart touted it as evidence of Clinton’s failing health. “It was really bizarre and dispiriting to see,” he says. “We’re always attuned to photographic manipulation, but what was more sinister in this situation was the misappropriation of a photo.” Misappropriation and misrepresentation of images helped drive the growth of fake news. Such stories rely on images to sell bogus narratives. This rise has been driven both by the preponderance of images available online, and the ease with which they can be manipulated. Photos play a key role in making fake news stories go viral by bolstering the emotional tenor of the lie. Go Back to Top.

What these teens learned about the Internet may shock you! When the AP United States history students at Aragon High School in San Mateo California, scanned the professionally designed pages of www.minimumwage.com, most concluded that it was a solid, unbiased source of facts and analysis. They noted the menu of research reports, graphics and videos, and the “About” page describing the site as a project of a “nonprofit research organization” called the Employment Policies Institute. But then their teacher, Will Colglazier, demonstrated how a couple more exploratory clicks—critically, beyond the site itself—revealed that the Employment Policies Institute is considered by the Center for Media and Democracy to be a front group created by lobbyists for the restaurant and hotel industries. “I have some bright students, and a lot of them felt chagrined that they weren’t able to deduce this,” said Colglazier, who videotaped the episode last January. “They got duped.” Or, as one student put it, loudly, “fudge nuggets!”

SearchReSearch: Search Challenge (11/11/15): Fake or real? How do you know? Unfortunately... ... people have been faking stories, photos, and claims for as long as humans have been around. Of course now we're aided by technology, which sometimes makes these deceptions a bit more difficult to ferret out. Here's an early famously faked photograph: This is one of the images of the Cottingley Fairies. In 1920, a series of photos, supposedly taken by two young girls while playing in the garden, claimed to show that fairies really did exist. Even Arthur Conan Doyle, he of Sherlock Holmes fame, was taken in by the images.

How to Spot Fake News Fake news is nothing new. But bogus stories can reach more people more quickly via social media than what good old-fashioned viral emails could accomplish in years past. Concern about the phenomenon led Facebook and Google to announce that they’ll crack down on fake news sites, restricting their ability to garner ad revenue. Perhaps that could dissipate the amount of malarkey online, though news consumers themselves are the best defense against the spread of misinformation.

Lesson Idea: Media Literacy and Fake News Overview: In a world filled with rapid pace communication through a variety of platforms, we have an abundance of information available at our fingertips. Discerning fact from fiction can be complex. Knowing the source can be challenging, and the messages being delivered can be received in different ways, effecting certain populations of people as well as our country. View the videos in this lesson with your students to cultivate an understanding of media literacy and engage in a discussion about its impact and significance for the future.

Battling Fake News in the Classroom In this post-election period, there has been a lot of discussion about fake news, particularly about how it is spread and shared online, and whether it influenced the recent presidential election. On November 22, Stanford University released an influential study showing that middle and high school students—and even some in college—have trouble distinguishing which online resources are credible. The inescapable fact is that young people need to be prepared for the Wild West of information that they live in and will grow up in.

SearchReSearch: Answer: Fake or real? How do you know? 1. Is this a faked photo? If so, how can you tell? (Be specific.) The obvious thing in the picture is the jet fighter in the upper left. Protect Yourself from Fake News - Fact v. Fiction - Fake News - Academic Guid... Here are some steps you can take to become a critical news consumer: Determine what type of article you are reading Is it an editorial or opinion piece? These articles reflect the author's personal beliefs and point of view. Untrustworthy sources can blur the line between reporting the facts and expressing opinions. Be sure to read carefully. How to identify fake news The illustration above, which shows reporters carrying various forms of fake news, was published way back in 1894 by pioneering cartoonist Frederick Burr Opper. He would have been blissfully unaware at the time of its creation, but he had just uncovered a powerful phrase that, 123 years later, would become word of the year for 2017 and which would define the credibility and legitimacy of the news, mass media and journalism throughout the 21st century. Rubber Duck Media explains below how to identify fake news and what can be done to prevent it spreading further and doing more damage.

Truth and the Modern Classroom December 19, 2016 Findings from a recent Stanford study show that middle and high school students have great difficulty in effectively evaluating the reliability of online sources. The study revealed that most middle and high school students accept information online as presented without questioning or verifying it. Ignorance of facts is the enemy of liberation and is devastating to our democracy. Reading Like A Historian The Reading Like a Historian curriculum engages students in historical inquiry. Each lesson revolves around a central historical question and features sets of primary documents designed for groups of students with diverse reading skills and abilities. This curriculum teaches students how to investigate historical questions by employing reading strategies such as sourcing, contextualizing, corroborating, and close reading. Instead of memorizing historical facts, students evaluate the trustworthiness of multiple perspectives on historical issues. They learn to make historical claims backed by documentary evidence. How do I use these lessons in my classroom?

Fake News Or Real? How To Self-Check The News And Get The Facts : All Tech Considered Guido Rosa/Getty Images/Ikon Images Fake news stories can have real-life consequences. On Sunday, police said a man with a rifle who claimed to be "self-investigating" a baseless online conspiracy theory entered a Washington, D.C., pizzeria and fired the weapon inside the restaurant. So, yes, fake news is a big problem. These stories have gotten a lot of attention, with headlines claiming Pope Francis endorsed Donald Trump in November's election and sites like American News sharing misleading stories or taking quotes out of context. And when sites like DC Gazette share stories about people who allegedly investigated the Clinton family being found dead, the stories go viral and some people believe them.

Who Stands Between Fake News and Students? Educators Every week, Dave Stuart hands out a current news article to his world history students so they can digest and evaluate the credibility of the information and its sources. One day this fall, Stuart, now in his tenth year at Cedar Springs High School in Michigan, distributed a couple of stories about the 2016 presidential candidates. In the middle of a uniquely controversial and divisive campaign, it was perhaps inevitable that during the discussion some students would dredge up information that didn’t appear in the articles their teacher had provided. It was quickly apparent, says Stuart, that much of it was untrue and probably gleaned from dubious sources – or peddlers of what has now been famously dubbed “fake news.” Source: Buzzfeed News