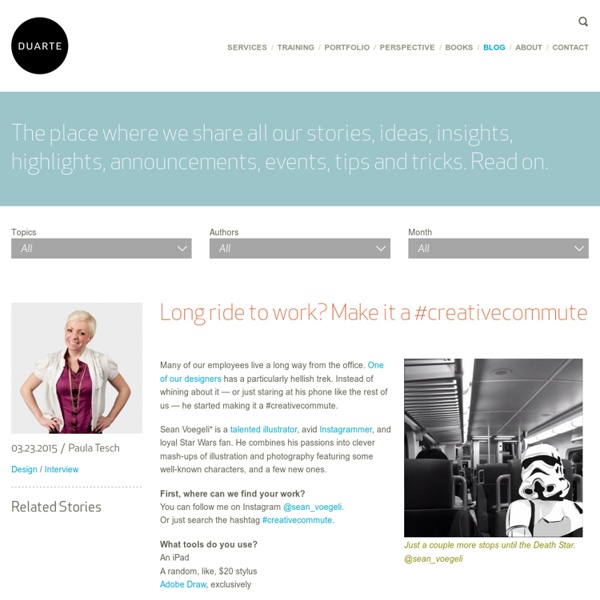 Just a couple more stops until the Death Star. @sean_voegeli Many of our employees live a long way from the office. One of our designers has a particularly hellish trek. Instead of whining about it — or just staring at his phone like the rest of us — he started making it a #creativecommute. Sean Voegeli* is a talented illustrator, avid Instagrammer, and loyal Star Wars fan. First, where can we find your work? What tools do you use? I like Adobe Draw a lot. How has your #creativecommute affected your day? On the way home, it’s a good way to unwind and transition into dad-mode. How do you decide what to draw? Which comes first, illustration or photo? How long does each piece take to make? Why Instagram? Do you have a favorite piece? “All strollers and droids must enter through the gate please.” And this one. Don’t you dare order a hotdog at this Disneyland stand. Last question, who should we be following on Instagram? So we dare you.

The 5 Most Memorable Concepts From Nancy Duarte’s New Book, Resonate When Nancy Duarte announced her second book, a prequel to her wonderful first book, Slideology, I was excited. But when I heard that it was designed to teach about harnessing the power of stories and storytelling in presentations, I was beside myself. I’ve been a fan of many different art forms for as long as I can remember, and I’ve always been particularly drawn to the storytellers, from Billy Joel and Ben Folds, to Tolkien and Spielberg. But despite the large volume of film, music, and literature I’ve consumed in my life, I’ve never really studied the structure of these stories in any great detail.

The Extreme Presentation(tm) Method The most popular thing we've ever posted on this blog has been, without doubt, the Chart Chooser. Available in nine different languages, the Chart Chooser has been featured in numerous books on presentation and data visualisation, and continues to serve as a very simple but effective tool for choosing a good chart. We have applied the same idea to the question of chosing different slide layouts, so here is the new Slide Chooser(tm). Try as we might, we couldn't fit it into one 8-1/2 x 11" (or A4) page, so we had to split it up on two pages: It works the same way the Chart Chooser does. Decker Blog My friend Jason is a genius. Like many parents across the country, Jason had struggled to explain the price of college to his daughter. Seventeen-year-old Rachel had fallen in love with a school whose tuition is upwards of $60,000 a year. For a while Jason tried to communicate by multiplying that number. “You’re going to graduate with a quarter-million dollars in debt,” he would say.

The Seven Basic Plots Note: This page was cut for reason: Main redirect to work. [Malady] Creating red links in 0 articles. Abandoning 40458 inbound links. You may want to ask in Ask The Tropers about whether it's safe to recreate. The Presentationist — Tony's PowerPoint Weblog A business vision, as most everyone knows, rarely becomes reality. That’s fine. Western culture enjoys making guesses about the future and we know not to hold visionaries accountable for shortcomings. We aim, we shoot, we don’t always score. (Yes, even Steve Jobs had his string of flops.) Still, every so often, companies such as Microsoft and General Motors and produce a statement such as this video which hints at what they think the future will look like.

Speaking about Presenting: Presentation Tips from Olivia Mitchell This is a practical and easy to use workbook which will guide you through how to create an engaging and memorable presentation. “I used to get stuck at the beginning of writing a presentation. I found your design process very useful.” Jagdesh Prasad, Policy Analyst You’ll learn why traditional approaches to presentation planning don’t work. For Your Company To Last, The "Brand" Must Die. But Stories Should Survive Off the coast of Newfoundland is a place called Fogo Island . At the height of its economy, about 3,000 people were living on the island, mostly employed by the fishery. When the fish population declined in the 1960s, so did the human population, as many were forced to look elsewhere for work.

Junk Charts This post is part 2 of an appreciation of the chart project by Google Newslab, advised by Alberto Cairo, on the gender and racial diversity of the newsroom. Part 1 can be read here. In the previous discussion, I left out the following scatter bubble plot. This plot is available in two versions, one for gender and one for race. The key question being asked is whether the leadership in the newsroom is more or less diverse than the rest of the staff. Writing Your Brand Story This entry was originally posted on December 5, 2005 at the old Brandstory blog (link available for a limited time). Every once in a while I read a post that makes me think, I wish I had written that. This post by John Winsor is one. Adding to thoughts posted by John Moore at Brand Autopsy (follow the link for a free PDF), John Winsor writes about the elements of a good story. Great ideas to keep in mind when developing or telling your story.

Lessons In Brand Storytelling We’re sick of the same old song and dance. Our tastes have expanded. Not just with food, but how we consume information, relationships, and experiences. Our expectations are on the rise. Social media storytelling is changing things. We demand communication that doesn’t insult our intelligence.