How to choose your news 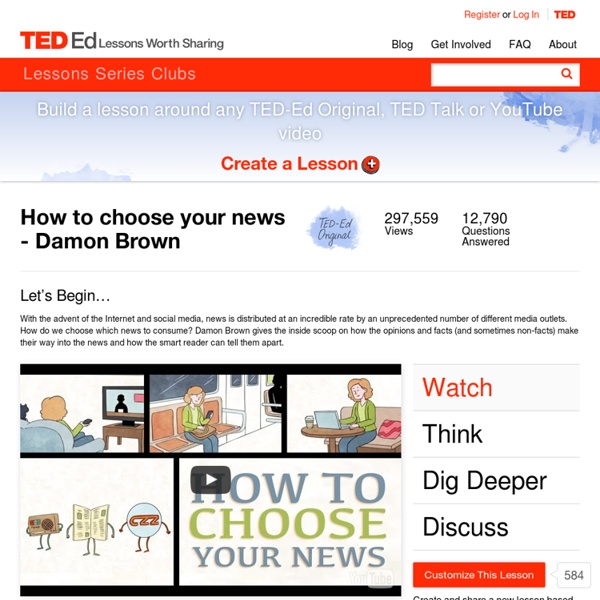 How the media landscape has changed Media visionary Clay Shirky gave a TED Talk on how the media landscape has changed. “The moment we’re living through, the moment our historical generation is living through, is the largest increase in expressive capability in human history.” In other words, the amount of information we are capable of capturing is unprecedented. As a result, we need new techniques to filter through the information and need to work much harder than previous generation to better understand our world. Watch Clay Shirky’s fascinating media discussion on TED-Ed. Understanding social media The TED Book “Our Virtual Shadow: Why We Are Obsessed with Documenting Our Lives Online” discusses the challenges of social media turning every day folks into journalists. You can read an excerpt of Our Virtual Shadow on the TED blog. Journalism can be much more than reporting.

The Honest Truth about Fake News Did you hear that Pope Francis endorsed Donald Trump for president? Or that Hillary Clinton sold weapons to ISIS? Crazy, right? And … 100 percent false. Five Laws of MIL Five Laws of Media and Information Literacy We are travelling towards the universality of books, the Internet and all forms of “containers of knowledge”. Media and information literacy for all should be seen as a nexus of human rights. Therefore, UNESCO suggests the following Five Laws of Media and Information Literacy. Fake News Is Here: Help Students Detect It We highly recommend that teachers explore the New York Times Learning Network article (1/19/17) sharing many lesson ideas and resources (including this post): Evaluating Sources in a ‘Post-Truth’ World: Ideas for Teaching and Learning About Fake News. By Frank W. Baker

Comet Ping Pong Pizzeria Home to Child Abuse Ring Led by Hillary Clinton Claim: The 'Podesta e-mails' revealed the existence of a secret society of pedophiles operating through a pizza place loosely connected to Clinton associate David Brock. Origin:On 4 November 2016, Reddit user u/DumbScribblyUnctious published a thread titled "Comet Ping Pong - Pizzagate Summary" to subreddit r/The_Donald (a community of Donald Trump supporters), which appears to have touched off a complex and detailed conspiracy theory involving WikiLeaks' release of e-mails from former Hillary Clinton presidential campaign chair John Podesta, child exploitation, and a Washington, D.C., pizzeria called Comet Ping Pong. None of this elaborate conspiracy theory was true, as the New York Times noted: None of it was true. While [Comet Ping Pong pizzeria owner James] Alefantis has some prominent Democratic friends in Washington and was a supporter of Mrs. Clinton, he has never met her, does not sell or abuse children, and is not being investigated by law enforcement for any of these claims.

Is technology smart enough to fix the fake news frenzy? The debate about “fake news” and the “post-truth” society we now supposedly inhabit has become the epistemological version of a feeding frenzy: so much heat, so little light. Two things about it are particularly infuriating. The first is the implicit assumption that “truth” is somehow a straightforward thing and our problem is that we just can’t be bothered any more to find it. The second is the failure to appreciate that the profitability, if not the entire business model, of both Google and Facebook depends critically on them not taking responsibility for what passes through their servers.

Evaluating Websites (Lesley Univ.) - English in Action website research guide Criteria for the Classroom Trying to sort out the gems from the junk on the Internet? Can You Tell Fake News From Real? Study Finds Students Have 'Dismaying' Inability Stanford researchers assessed students from middle school to college and found they struggled to distinguish ads from articles, neutral sources from biased ones and fake accounts from real ones. Gary Waters/Ikon Images/Getty Images hide caption toggle caption Research Tips: Primary, secondary and tertiary sources Using Primary, secondary and Tertiary Sources in Research Let’s say you are writing a research paper on the Equal Rights Amendment (ERA) of 1972, but you are unfamiliar with it. A good place to gather a general idea or understanding of the ERA would be a tertiary source, such as Wikipedia or the Encyclopedia Brittanica.