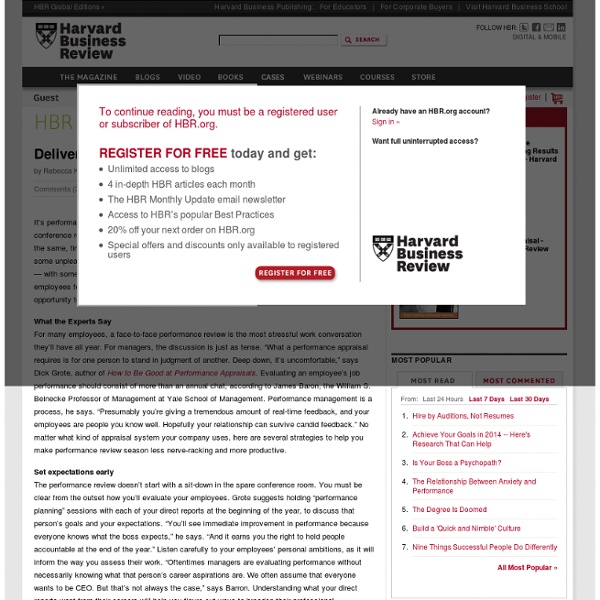 It’s performance review season, and you know the drill. Drag each of your direct reports into a conference room for a one-on-one, hand them an official-looking document, and then start in with the same, tired conversation. Say some positive things about what the employee is good at, then some unpleasant things about what he’s not good at, and end — wearing your most solicitous grin — with some more strokes of his ego. The result: a mixed message that leaves even your best employees feeling disappointed. But if you take the right approach, appraisals are an excellent opportunity to reinforce solid performers and redirect the poor ones. What the Experts Say For many employees, a face-to-face performance review is the most stressful work conversation they’ll have all year. Set expectations early The performance review doesn’t start with a sit-down in the spare conference room. Hold your ground The hot button issues associated with performance reviews are money and rank. Do Don’t

Implementing Strategies in Extreme Negotiations Download the PDF of this Idea in Practice. In November 2010, Jeff Weiss and Jonathan Hughes, along with Major Aram Donigian, published an article in HBR called "Extreme Negotiations." It described the temptations we all face when negotiating under duress—for example, acting too quickly or relying too much on coercion—and suggested that the principles of effective negotiation become even more important when the stakes are high and the pressure is on. The authors used examples from military negotiations in Iraq and Afghanistan to illustrate those principles. We followed up with Weiss and Hughes to understand more about how readers could apply these negotiating principles to their own situations. HBR: In a business context, what do you define as an "extreme" negotiation? Weiss and Hughes: It's when the stakes and risks are especially high. Remind us of what the principles are. Do these strategies need to be reciprocated to be effective? W & H: No, although that is a very common concern.

Ditch Performance Reviews? How About Learn to do Them Well? - Maxim Sytch and D.Scott DeRue by Maxim Sytch and D.Scott DeRue | 10:23 AM June 22, 2010 Few activities in a workplace polarize like performance reviews. Some see them as subjective and ungrounded, one-sided and boss-dominated and something we should do away with entirely, an opinion put forth most recently in a Wall Street Journal article. Our view? To learn to conduct performance reviews well, you need to know the key reasons they are so challenging, frustrating, and yes, generally disliked. The three challenges: 1. 2. 3. So those are the biggest and most-consistent challenges to performance reviews. 1. 2. Also, use concrete events or behaviors to support your evaluations. 3. 4. Maxim Sytch is an assistant professor in the Department of Management & Organizations, Stephen M. D.

Get the Mentoring Equation Right - Whitney Johnson by Whitney Johnson | 5:01 PM October 25, 2011 This post was co-authored with Bob Moesta. While it’s written from my perspective, he was central to the development of the idea. Bob is the Managing Partner of The Re-Wired Group in Detroit, an innovation incubator and consultancy specializing in demand-side innovation. My quandary has led to a considered, lengthy discussion with Bob Moesta, a demand-side innovation expert, about how to decide whom to mentor. Bob sees mentoring as the balance of two worlds that overlap for a period of time and a certain amount of effort. The mentee side of the equation describes: How badly does the mentee want to advance his/her career and how much ground do they feel they need to cover to get there? Drive = How motivated is the mentee? The mentor side asks: Can I help and how much effort will it require? Gap = The amount of experience the mentor has compared with the mentee. To date, I have gauged drive simply by whether someone shows up and asks.

Excellence Now by Tom Peters The Secret Ingredient in GE’s Talent-Review System - Raghu Krishnamoorthy by Raghu Krishnamoorthy | 10:00 AM April 17, 2014 GE is often highlighted as an organization that develops some of the most effective leaders. Most companies have a version of the talent-review system we use at GE. But judging from what I hear from managers of companies that visit us to benchmark our system, the difference between our approach and theirs does not lie in forms, rankings, tools, or technologies. As the custodian of the talent-review process, I have been lucky to observe this at close quarters. It starts with the attention given to the individual appraisal. It is not uncommon for a manager’s assessment and feedback to be questioned by his or her own manager, if the commentary does not appear to reflect the individual accurately. We continue to use a nine-block grid with quadrants that capture levels of performance and values not as a means of a forced ranking but as a way of facilitating differentiation. Some skills are more important than others to be a great leader.

How to Manage a Perfectionist - Amy Gallo - Best Practices by Amy Gallo | 12:13 PM October 19, 2011 Do you have a perfectionist on your team? The good news is that your direct report has high standards and a fine attention for detail. The bad news is that he fixates on every facet of a project and can’t set priorities. What the Experts Say Many people claim to be perfectionists because they think it makes them look good. Appreciate the positives while recognizing the negatives Working with perfectionists can be frustrating. Give the right job Perfectionists are not a good fit for every job. Increase self-awareness Even in the right position, perfectionists can cause trouble — slowing progress or demoralizing colleagues. Coach, if possible Not every perfectionist is coachable but it pays to try. Be careful with feedback Every employee needs feedback. Principles to Remember Do: Don’t: Case Study #1: Find a better job fit Henry Chasen,* a director at a contract manufacturing company, managed Sean* for more than 15 years. Kate also did some coaching.

Saving An Iconic Brand: Five Ways Alan Mulally Changed Ford’s Culture Alan Mulally is credited with saving Ford Motor Company--and doing it without the taxpayer’s money. But what he really did was save Ford from itself. In the American automobile industry, Ford was notorious for its caustic corporate culture. Executives put their own advancement and the success of their own departments ahead of the bottom line. Applying the same methods he had used to save Boeing after the terrorist attacks of September 11, 2001 annihilated its order book, Mulally transformed this short-sighted, cutthroat, careerist culture into a model of collaboration and efficiency. Forcing everyone to “join the team” Before Mulally arrived in Dearborn, Ford meetings were arenas of mortal combat. Insisting on a rigorous reliance on the facts At pre-Mulally Ford, the truth came in many different flavors. Creating one Ford It did not take Mulally long to realize that there was not just one Ford, but many. Building cars and trucks that people actually wanted But Mulally’s plan was different.

Do You Make it Too Hard to Get Promoted? For those who lead companies, how difficult do you make it to promote someone? Is all the effort worth it to your managers, supervisors, and the person themself? Or are you practically posting an Exit sign for your most ambitious, talented workers, who will inevitably seek jobs elsewhere? Here are a couple of promotion practices that may be out of date and hindering your efforts to keep employees engaged, contributing, and moving up the ladder. Promotions happen only once a year. In corporate America, there's a long-standing practice of doling out promotions once a year at annual review time. Nowadays, we move fast. An employee might be ready for a promotion in February. True, many of us are still using this once-a-year promotion schedule because we're tied to it with budgets, approvals, and so on. Job descriptions and skills are not defined. In many organizations, it's unclear how to even get promoted.

Steve Jobs and The Bobby Knight School of Leadership - David Aaker by David Aaker | 10:45 AM March 13, 2012 I believe that Steve Jobs was among the best CEOs of this generation because he created entirely new categories six times in a decade, and built the largest company market cap ever. Yet two recent and excellent books (Inside Apple, by Adam Lashinsky and Steve Jobs by Walter Issacson) describe a management style that was disturbingly harsh. To understand Jobs’s success, I find it helpful to look at the success of Bobby Knight, the fabled basketball coach at Indiana. Knight was one of two coaches to win over 900 games, won the NCAA championship three times, and was the national coach of the year four times yet had a management style similar to Jobs (described in detail by John Feinstein’s book A Season on the Brink). Jobs’s treatment of employees and partners has been described as brutal and even cruel. Knight’s treatment of players has been termed abusive. They were incredibly knowledgeable and insightful.

The corporate kabuki of performance reviews Not exactly a state of mind anyone wants to have. But we don’t need neuroscience to tell us why the annual performance review song-and-dance is so universally reviled. We have our own reasons: the endless paperwork, the evaluation criteria so utterly unrelated to our jobs, and the simplistic and quota-driven ratings used to label the performance of otherwise complex, educated human beings. And then there’s the buggy software and tedious online tools that make what should be a simple process-sitting down for a cup of coffee to talk about how things are going-downright exasperating. What makes this annual rite of corporate kabuki so baffling is that those of us getting and giving reviews aren’t the only ones who hate them. They’re wildly inaccurate, for one: CEB’s research finds that two-thirds of employees who receive the highest scores in a typical performance management system are not actually the organization’s highest performers. One answer is we always have.

How To Start a Tough Conversation at Work One of the questions I’m often asked is how to start a difficult or challenging conversation. It might be a sensitive topic, performance matter or personal issue. In my experience, managers often want to either: Tap dance around the topic with “small talk” – conversation about football, movies, pets, etc. and then launch into the coaching discussion. This can send mixed messages to employees about why they are there. It’s better to keep the message on point. Finding the right words can be a challenge. to start meetings, conversations, and discussions. Now some of you might be saying…really?! I also found myself thinking of the new consultant trying to strike up conversations with potential clients at networking meetings. If you know someone who is looking for suggestions in the best way to start a conversation, this book could be valuable. I’d like to ask your permission to raise a sensitive subject.I have some things to say that I imagine will be hard to hear. inShare74