The Myth of the Bell Curve 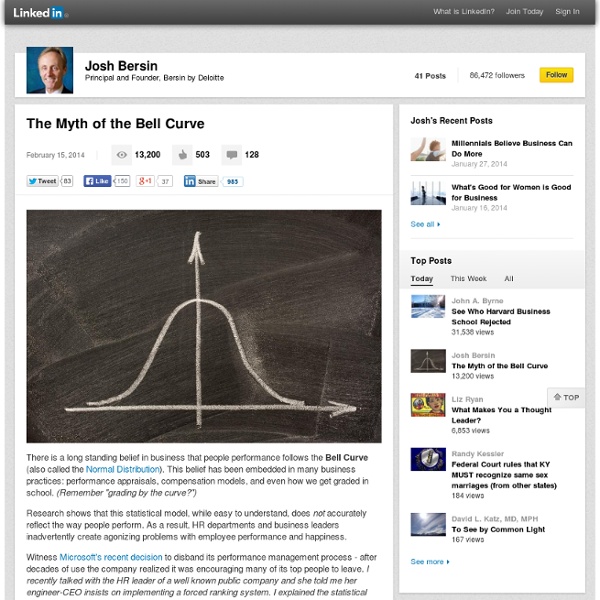 Amiga Forever - Amiga Emulation, Games, History and Support Since 1997 The #1 Feature of a Meaningless Job Main page Introduction: The video game history started in a strange and complicated way and it is important to avoid confusions with what happened in the 1950s and 1960s. The real video game history started with Ralph Baer as early as 1951. One very important thing to remember is how the video game has been defined in the 1960s before modern tehnologies allowed video games to be played on computers. A video game is defined as an apparatus that displays games using RASTER VIDEO equipment: a television set, a monitor, etc. The video game history is often misunderstood, so we will explain what happened in the 1950s first, and then go through the real video game history which began in 1966. As early as 1951, a young 29-year old TV engineer named Ralph Baer worked at Loral, a TV company. In the USA, it started on May 1972 with the Magnavox Odyssey (first home video game) and Atari in November 1972 (their first PONG arcade game). In Europe, video games appeared in homes in 1974.

The Real Reason New College Grads Can’t Get Hired It’s because college kids today can’t do math, one line of reasoning goes. Or they don’t know science. Or they’re clueless about technology, aside from their myriad social-media profiles. These are all good theories, but the problem with the unemployability of these young adults goes way beyond a lack of STEM skills. As it turns out, they can’t even show up on time in a button-down shirt and organize a team project. The technical term for navigating a workplace effectively might be soft skills, but employers are facing some hard facts: the entry-level candidates who are on tap to join the ranks of full-time work are clueless about the fundamentals of office life. A survey by the Workforce Solutions Group at St. Another employer survey, this one by staffing company Adecco, turns up similar results. As much as academics go on about the lack of math and science skills, bosses are more concerned with organizational and interpersonal proficiency. And all internships are not created equal.

A Comparison of Two Variant Versions of Alice in Wonderland In 1865, Charles Dodgson published a book entitled Alice's Adventures in Wonderland. He used the pseudonym Lewis Carroll. The main character in the story was a real live girl named Alice Liddell. The story was originally an impromptu tale which Charles Dodgson invented for the entertainment of Alice and her two sisters. Alice enjoyed the story and asked Charles Dodgson to write it out for her. In 1851, Walt Disney released a movie entitled Alice in Wonderland. I see a distinct difference in the attitude of Alice in the two versions. Both versions begin in a similar fashion. In both versions, she is able to see cupboards and bookcases on the wall of the hole through which she is falling. As Alice falls, Carroll describes her thoughts in detail. In contrast, Disney's movie mentions only a few of her thoughts. When she lands, Carroll's Alice sees the White Rabbit racing through a long passage. All the doors are locked, but there is a table with a key on it. How doth the little busy bee

The Big Work Lie: “Out of Office” Game Preservation SIG/White Paper/Before It's Too Late: A Digital Game Preservation White Paper - IgdaWiki International Game Developers Association 2008 White Paper answering the "Why should we preserve videogames?" for developers / studios, containing information on the "Why" as well as a little practical advice on "How" at the end. Final Information Title: Before It's Too Late: A Digital Game Preservation White Paper Lead and Editor: Henry Lowood Section Writers: Andrew Armstrong, Devin Monnens, Zach Vowell, Judd Ruggill, Ken McAllister, Rachel Donahue Additional Editor: Jon-Paul Dyson Proofreaders: Stuart Feldhamer, Jo Barwick Downloads: DOC, ODT, PDF, Lulu Copies, Front Cover Released: March 2009 Introduction: The Game Preservation Special Interest Group was founded in 2004, only five years ago. All of these developments are fine and good. We wish to be very clear about one point, so at the risk of repetition, allow us to say it again in other words: if we fail to address the problems of game preservation, the games you are making will disappear, perhaps within a few decades. Contributors Sections

How To Remove Gender Bias From the Hiring Process Are you aware of your own gender bias when you're hiring? A recent study, published by Proceedings of the National Academy of Sciences, finds that managers of both sexes are twice as likely to hire a man as a woman. The study, conducted by business-school professors from Columbia University, Northwestern University, and the University of Chicago, asked male and female managers to recruit people to handle simple mathematical tasks. The male candidates boasted about their abilities, while women downplayed their talents, but the managers didn't compensate for the difference when making hiring decisions. Avivah Wittenberg-Cox, the CEO of gender consulting firm 20-first and author of How Women Mean Business, writes in the Harvard Business Review that the study is a typical example of the corporate hiring process. Below, read Wittenberg-Cox's three tips to help yourself and your company get over bias against women when making hiring decisions. Make gender bias a business issue.

Turn Your Childs Artwork Into a Stuffed Animal All kids are artists! But, did you know that you can turn one of your children’s masterpieces into a treasured stuffed animal? Just follow these quick and simple steps to help your child create their own huggable keepsake! Only a few supplies are needed to create your own artwork stuffed animal! Just gather: Some plain white paper fabric crayons (can be purchased at any craft store) a half yard of white muslin fabric an iron a needle and thread a sewing machine First, set out a piece of paper and the fabric crayons and encourage your child to create a picture. Next, transfer your picture onto your fabric. Iron your masterpiece with slow and steady strokes. After your iron on transfer is complete, place another piece of fabric under your transfer and cut out your design. Turn your design to the middle, and using your sewing machine, (or a needle and thread) sew around the outside. Using the hole you left open for stuffing, turn your design inside out so that the seaming is on the inside.

3 Horrible Career Tips for Introverts (Photo Credit: elisabetter foco/Flickr, via Unsplash) Over at Career Rocketeer, Dorothy Tannahill-Moran offers a few pieces of advice leaders should never give their introverted workers. Among her big no-nos: 1. Just do it. "This advice might work for Nike to say to athletes but it is about as unhelpful and useless as it gets for introverts," writes Tannahill-Moran. Introverts often feel more comfortable if they prepare ahead of time. 2. Ask any introvert for his least favorite question. As an aside, if you want to measure how confident other team members are, you could do worse than waiting to see how they respond to introverted colleagues. 3. Everything goes in cycles, including business best practices. Tell Us What You Think

Dimension (mathematics and physics) A diagram showing the first four spatial dimensions. 1-D: Two points A and B can be connected to a line, giving a new line segment AB. 2-D: Two parallel line segments AB and CD can be connected to become a square, with the corners marked as ABCD. 3-D: Two parallel squares ABCD and EFGH can be connected to become a cube, with the corners marked as ABCDEFGH. 4-D: Two parallel cubes ABCDEFGH and IJKLMNOP can be connected to become a hypercube, with the corners marked as ABCDEFGHIJKLMNOP. In physical terms, dimension refers to the constituent structure of all space (cf. volume) and its position in time (perceived as a scalar dimension along the t-axis), as well as the spatial constitution of objects within—structures that correlate with both particle and field conceptions, interact according to relative properties of mass—and are fundamentally mathematical in description. The concept of dimension is not restricted to physical objects. A tesseract is an example of a four-dimensional object.

When Winning Feels Like Losing My Story: Experimenting With Message Passing Software Modules for Arduino Programming I've been fascinated by the idea of being able to build software applications in a way similar to how electronic circuits are built using ICs. That is, by connecting discrete software components together via clearly defined communication pathways. I've begun to use the Arduino development platform to play around with ideas for implementing this type of component-based system. The following describes my first project, which involved creating a small set of very simple modules and a runtime system to host them. Simple Software Module System Description The diagram in Figure 1 shows two modules, A and B, connected by channels ab and ba. Figure 1: Software Modules Modules and Ports Modules are designed to perform a single task (e.g., get a value from an analog pin, monitor the state of a digital input pin, perform a calculation, etc.) or a small group of simple tasks. void Mod1(int InPort1[], ..., int InPortN[], int OutPortN[], ..., int InPortM) { module code } Messages int msg[messageSize];