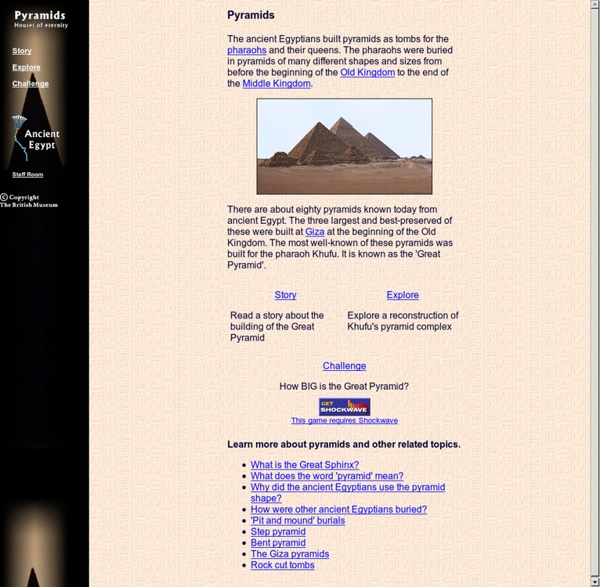 Ancient Egypt | Egyptian Mummies A mummy in Ancient Egypt is a body that has been preserved and carefully designed to last for an eternity. The process was long and tedious; however, essential for an Egyptian as it meant an existence in the Afterlife. The priests who performed this sacred ritual went to great lengths to ensure their mummies were carefully anointed, wrapped, and packaged. After the painstaking process was completed, these ancient packages were laid to rest inside a tomb or mass burial site. A mummy gives us a tiny glimpse into the life of an Ancient Egyptian—some royal and some everyday citizens. The Mummification Process How was a mummy prepared?

Cartography Cartography (from Greek χάρτης khartēs, "map"; and γράφειν graphein, "write") is the study and practice of making maps. Combining science, aesthetics, and technique, cartography builds on the premise that reality can be modeled in ways that communicate spatial information effectively. The fundamental problems of traditional cartography are to:[citation needed] Set the map's agenda and select traits of the object to be mapped. Modern cartography is largely integrated with geographic information science (GIScience) and constitutes many theoretical and practical foundations of geographic information systems. History[edit] The earliest known map is a matter of some debate, both because the definition of "map" is not sharp and because some artifacts speculated to be maps might actually be something else. Mappa mundi are the Medieval European maps of the world. The Arab geographer Muhammad al-Idrisi produced his medieval atlas Tabula Rogeriana in 1154. Technological changes[edit] Map types[edit]

Dimensions of the Cheops (Khufu) pyramid and building materials involved. Numbers and figures of the Cheops (Khufu) pyramid: The pyramid of Khufu - Output / performance - Building material - Dimensions of the pyramid - Dimensions in Royal Cubits - Sources Cheops-pyramid (pyramid of Khufu) Of the the famous Seven Wonders of the Ancient World the Great Pyramid of Khufu (Cheops) at Giza is the only one still standing. The Giza pyramids must have made an incredible visual impact - at the edge of the desert three abstract geometrical symbols were rising, huge luminous white triangles reflecting the blinding light of the sun! The pyramids on the Giza plateau are with 146.59m (Khufu / Cheops) and 143.87m (Khafre / Chefren) respectively the largest, however there are over 30 major pyramids and a myriad of smaller pyramids in Egypt. Cheops-Pyramid 1. Output / performance Detailed calculations how many workers were necessary to build the pyramid Overview pyramid building Building materials for the Cheops-pyramid Quarrying stones for the pyramid Löhner's rope roll Sources

Map Projections, Geography Glossary Advertisement. EnchantedLearning.com is a user-supported site. As a bonus, site members have access to a banner-ad-free version of the site, with print-friendly pages.Click here to learn more. (Already a member? A map is a representation of a place. Projections: Maps are called projections because map-makers have to project a 3-D surface onto a 2-D map. Since a map is 2-dimensional representation of a 3-dimensional world, compromises must be made in accuracy (some information must be lost when one dimension is ignored). Maps that accurately reflect area are often called equal-area maps (an example is the Albers equal-area conic map). Related Terms: Explore Ancient Egypt Explore Ancient Egypt with our Interactive Map © 2012 This website is produced by the Student Recruitment, Admissions and International Development Division at The University of Manchester

Distortion Electronic signals[edit] Graph of a waveform and some distorted versions of the same waveform In telecommunication and signal processing, a noise-free "system" can be characterised by a transfer function, such that the output can be written as a function of the input as When the transfer function comprises only a perfect gain constant A and perfect delay T the output is undistorted. This diagram shows the behaviour of a signal (made up of a square wave followed by a sine wave) as it is passed through various distorting functions. Amplitude distortion[edit] Amplitude distortion is distortion occurring in a system, subsystem, or device when the output amplitude is not a linear function of the input amplitude under specified conditions. Harmonic distortion[edit] Frequency response distortion[edit] Non-flat frequency response is a form of distortion that occurs when different frequencies are amplified by different amounts, caused by filters. Phase distortion[edit] Group delay distortion[edit]

Ancient Egyptian History for Kids: Pharaohs Back to Ancient Egypt for Kids The Pharaohs of Ancient Egypt were the supreme leaders of the land. They were like kings or emperors. The name Pharaoh comes from a word meaning "great house" describing a palace or kingdom. Historians divide up the timeline of Ancient Egyptian history by the dynasties of the Pharaohs. There were many great Pharaohs throughout the history of Ancient Egypt. Akhenaten - Akhenaten was famous for saying there was only one god, the sun god. Hatshepsut - A lady Pharaoh, Hatshepsut was originally regent for her son, but she took on the power of Pharaoh. Amenhotep III - Amenhotep III ruled for 39 years of great prosperity. Ramses II - Often called Ramses the Great, he ruled Egypt for 67 years. Fun Facts about Pharaohs Pepy II became Pharaoh at the age of 6. Take a ten question quiz at the Ancient Egyptian Pharaohs questions page. More information on the civilization of Ancient Egypt: Back to History for Kids

Egypt Egypt i/ˈiːdʒɪpt/ (Arabic: مصر‎ Miṣr), is a transcontinental country spanning the northeast corner of Africa and southwest corner of Asia, via a land bridge formed by the Sinai Peninsula. Most of its territory of 1,010,000 square kilometers (390,000 sq mi) lies within the Nile Valley of North Africa and is bordered by the Mediterranean Sea to the north, the Gaza Strip and Israel to the northeast, the Gulf of Aqaba to the east, the Red Sea to the east and south, Sudan to the south and Libya to the west. With over 86 million inhabitants, Egypt is one of the most populous countries in Africa and the Middle East, and the 15th-most populated in the world. The economy of Egypt is one of the most diversified in the Middle East, with sectors such as tourism, agriculture, industry and services at almost equal production levels. Names The English name Egypt is derived from the ancient Greek Aígyptos (Αἴγυπτος), via Middle French Egypte and Latin Aegyptus. History Prehistory and Ancient Egypt