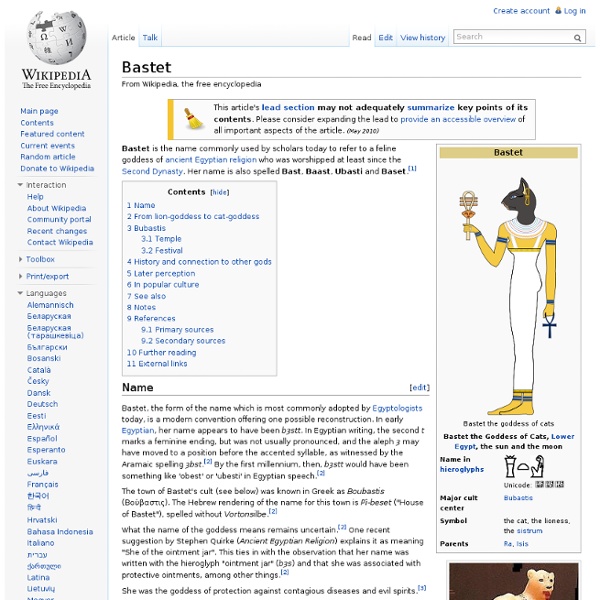 Photograph of an alabaster cosmetic jar topped with a lioness, representing Bast, an 18th dynasty burial artifact from the tomb of Tutankhamun circa 1323 BC - Cairo Museum Bastet was a goddess in ancient Egyptian religion, worshipped as early as the Second Dynasty (2890 BC). As Bast, she was the goddess of warfare in Lower Egypt, the Nile River delta region, before the unification of the cultures of ancient Egypt. Her name is also spelled Baast, Ubaste, and Baset.[1] The two uniting cultures had deities that shared similar roles and usually the same imagery. Name[edit] Bastet, the form of the name which is most commonly adopted by Egyptologists today because of its use in later dynasties, is a modern convention offering one possible reconstruction. During later dynasties, Bast was assigned a lesser role in the pantheon bearing the name Bastet, but retained. The town of Bast's cult (see below) was known in Greek as Boubastis (Βούβαστις). She is also known as The Eye of Ra. Bubastis[edit]

Atum Atum (/ɑ-tum/), sometimes rendered as Atem or Tem, is an important deity in Egyptian mythology. Name[edit] Atum's name is thought to be derived from the word tem which means to complete or finish. Thus he has been interpreted as being the 'complete one' and also the finisher of the world, which he returns to watery chaos at the end of the creative cycle. As creator he was seen as the underlying substance of the world, the deities and all things being made of his flesh or alternatively being his ka.[2] Origin[edit] Atum is one of the most important and frequently mentioned deities from earliest times, as evidenced by his prominence in the Pyramid Texts, where he is portrayed as both a creator and father to a king.[2] Roles[edit] In the Old Kingdom the Egyptians believed that Atum lifted the dead king's soul from his pyramid to the starry heavens.[6] He was also a solar deity, associated with the primary sun god Ra. Atum is the god of pre-existence and post-existence. Iconography[edit]

Ra Ra /rɑː/[1] or Re /reɪ/ (Egyptian: 𓂋ꜥ, rˤ) is the ancient Egyptian solar deity. By the Fifth Dynasty (2494 to 2345 BC) he had become a major god in ancient Egyptian religion, identified primarily with the midday sun. The meaning of the name is uncertain, but it is thought that if not a word for 'sun' it may be a variant of or linked to words meaning 'creative power' and 'creator'.[2] In later Egyptian dynastic times, Ra was merged with the god Horus, as Re-Horakhty ("Ra, who is Horus of the Two Horizons"). He was believed to rule in all parts of the created world: the sky, the earth, and the underworld.[3] He was associated with the falcon or hawk. When in the New Kingdom the god Amun rose to prominence he was fused with Ra as Amun-Ra. All forms of life were believed to have been created by Ra, who called each of them into existence by speaking their secret names. Role[edit] Ra and the sun[edit] To the Egyptians, the sun represented light, warmth, and growth. Ra in the underworld[edit]

Coyolxauhqui Disk depicting a dismembered Coyolxauhqui which was found during construction in 1978 in Mexico City. Its discovery led to the excavation of the Templo Mayor. In Aztec mythology, Coyolxauhqui (Classical Nahuatl: Coyolxāuhqui [kojoɬˈʃaːʍki], "Face painted with Bells") was a daughter of Coatlicue and Mixcoatl and is the leader of the Centzon Huitznahuas, the southern star gods. Coyolxauhqui was a powerful magician and led her siblings in an attack on their mother, Coatlicue, because Coatlicue had become pregnant. Attack on Coatlicue[edit] The pregnancy of Coatlicue, the maternal Earth deity, made her other children embarrassed, including her oldest daughter Coyolxauhqui. Templo Mayor stone disk[edit] A large shield-shaped stone relief reflecting this story was found at the base of the stairs of the Templo Mayor. Other associations[edit] Coyolxauhqui’s celestial associations are not limited to the moon. See also[edit] References[edit] Duran, Fray Diego (Doris Heyden, translator).