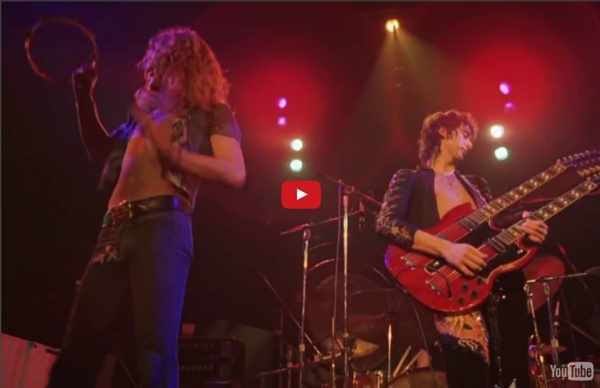 Beatlemania Begins: The Beatles First U.S. Visit to Play Ed Sullivan It seems impossible to recall a time when the Beatles weren’t part of Americans’ collective consciousness. Yet exactly 50 years ago, on Feb. 7, 1964, as John Lennon, Paul McCartney, George Harrison and Ringo Starr boarded Pan Am Flight 101 in London for their first U.S. visit, they had little idea what lay in store for them. John calculated the Beatles’ odds as the plane began its descent. He stared dolefully at the seat back in front of him, clutching the hand of his wife Cynthia.

Bob Dylan Performs at Gerde’s Folk City – Feb. 8, 1963 Forty-nine years ago, on February 8, 1963, Bob Dylan played a set at Gerde’s Folk City in Greenwich Village. It was two years after Dylan had arrived in New York, nearly two years since he got one of his first breaks playing at Gerde’s, which was probably the most important folk club in the country at that time. Poster for Dylan’s first gig at Gerde’s Folk City in 1961. It was a review in the New York Times by Robert Shelton of Dylan opening for the Greenbriar Boys at Gerde’s that helped Dylan to get the attention of Columbia Records’ legendary A&R man John Hammond. By February of 1963, Dylan had signed a record deal with Columbia Records, taken on manager Albert Grossman, secured a publishing deal with Whitmark and recorded his debut, Bob Dylan, and had it released to less than minor success.

The Rolling Stones on ‘The Dick Cavett Show,’ 1972 The Rolling Stones’ U.S. tour of 1972 was a big fucking deal. Let us count the ways: The Stones had not played live shows in America since the infamous final show of their 1969 tour, at Altamont. The album they were supporting was one of the most epochal in all of rock and roll history, Exile on Main Street—which was released in America just a couple of weeks before the tour. (None of the Beatles’ late albums were supported by touring, keep in mind. Exile was, as were Beggars Banquet and Let It Bleed in 1969.)

Bob Dylan's 'Lay Lady Lay' In 10 Different Disguises Recorded on Valentine’s Day 1969, and released that summer, ‘Lay Lady Lay’ became one of Bob Dylan‘s biggest hits, checking in at No. 7 on the Billboard charts, and hitting No. 5 in the U.K. Aside from the warm and inviting melody, and somewhat racy lyric, the record was also notable for a change in Dylan’s singing style. It would help push the ‘Nashville Skyline’ album into the Top 10. Over the years, the song has become a standard of sorts, and one of Dylan’s most recognizable songs. It has also become a favorite for other artists to take a stab at.

Nina Simone plays Bob Dylan Eunice Kathleen Waymon aka. Nina Simone was the sixth of eight children, she grew up in poverty in Tryon, North Carolina. Her family wished for her was that she should be the world’s finest classical pianist. She did not get into the schools she wanted and always blamed racism. Born the sixth child of a preacher’s family in North Carolina, Simone aspired to be a concert pianist.

‘Mingus’: Powerful and heartbreaking documentary portrait of the Jazz giant Tuesday, November 22nd, 1966, jazz musician Charlie Mingus waited with his five-year-old daughter Carolyn, to be evicted from his studio at 22 Great Jones Street, New York. Mingus had planned to open a music school and jazz workshop at this Lower East Side loft, but he had been frustrated in his intentions and had fallen behind in the rent. As he waited for the NYPD and the Sanitation Department to arrive and remove his belongings, filmmaker Thomas Reichman recorded an intimate portrait of one of the jazz music’s greatest composers and performers. In the film, Mingus is seen moving distractedly amongst his boxed possessions, showing great affection for his daughter, recalling happier times living on Fifth Avenue, and acknowledging the inherent racism in America by offering his own Pledge of Allegiance:. ”I pledge allegiance to the flag—the white flag. I pledge allegiance to the flag of America.

Édith Piaf’s Moving Performance of ‘La Vie en Rose’ on French TV, 1954 Édith Piaf’s life was anything but rosy. Born in a Parisian slum, she was abandoned by her mother and lived for awhile in a brothel run by her grandmother. As a teenager she sang on the streets for money. She was addicted to alcohol and drugs for much of her life, and her later years were marred by chronic pain.