In the war on fake news, school librarians have a huge role to play 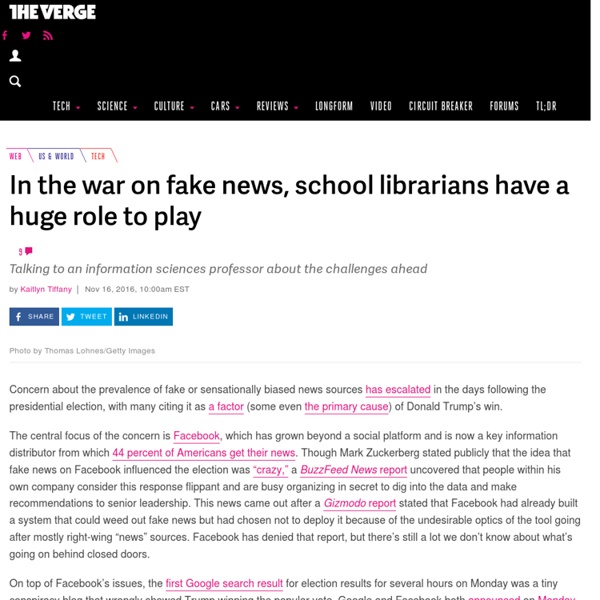 All I Know Is What’s on the Internet All I Know Is What’s on the Internet Information literacy is not the antidote to fake news, because the institutions for teaching it can’t be trusted either Rolin Moe January 17, 2017 share Image: "Lost in Reflection" from Night Shift by Guillaume Lachapelle. Fake news elected Donald Trump. At least, judging by media attention — social or otherwise — one might come to that conclusion. Getting Out of the Filter Bubble: Finding The Real You Online I recently had a great (and timely) conversation with one of the counselors from International School Manila at the EARCOS Teacher’s Conference in Kota Kinnabalu, Malaysia (check out all the resources from all of my sessions here). She said: “I wish there was a way to help students recognize what their online profile looks like to other people. They often think what they’re posting is great, but it can be hard for them to view it through someone else’s eyes.”

Post-Truth and Fake News Earlier in the year I was tasked with creating a resource guide on “post-truth” and fake news. It’s not something I was clamoring to do. To be honest: I was still in the post-election malaise–and my heart was just not into it. Rarely would I label any of my work tasks as “edicts,” (I like the flexibility and creativity of my job) but this time it was. As part of a broader campus-wide discussion, the library needed to play a part. I began by facilitating a meeting with the librarians on the topic of:

Digital content curation: For students! – Kay Oddone – Medium Originally published on LinkingLearning I’ve been a fan of digital content curation for a long time. I’ve blogged about it on many occasions; first waxing lyrical about Diigo way back in 2011, then celebrating the new year in 2013 by suggesting resolutions to use curation to manage content overload and then reflecting on curation as an art form more recently. Lesson Plan: How to Spot Fake News The problem of fake news came to a dizzying head in 2016 when a man fired a shot in a family pizzeria as he “self-investigated” a false report of a child abuse ring led by top democrats. A BuzzFeed report confirmed that fake news stories, such as the one that claimed Hillary Clinton sold arms to ISIS, were actually viewed more times than articles from established and legitimate news sources. Did fake news have an impact on the election? How do we address the problem from here? This lesson plan features a Channel One News report on the problem. Then, students analyze the problem and consider steps media outlets and individuals need to take to prevent the viral spread of propaganda.

Fake News, Alternative Facts and Librarians As Dedicated Defenders of Truth Let's be clear, there's no such thing as "alternative facts." The same fact can be used by different people to support alternative opinions, but the facts don't change. Different people can use the same facts to emphasize alternative ideas or to inform different theories, but the facts remain the same. Facts are non-partisan. The Future of Free Speech, Trolls, Anonymity and Fake News Online Many experts fear uncivil and manipulative behaviors on the internet will persist – and may get worse. This will lead to a splintering of social media into AI-patrolled and regulated ‘safe spaces’ separated from free-for-all zones. Some worry this will hurt the open exchange of ideas and compromise privacy

Good Tools for Teaching Students How to Evaluate Web Content Credibility Source: Butler University Library, adapted from Meriam Library at CSU, Chico One of my favorite lessons to teach is about evaluating the credibility of web sites and other digital content. I often start by showing the classic “Can't Lie On The Internet” video from AllState, which gets a laugh and helps to get students in the right mind set.