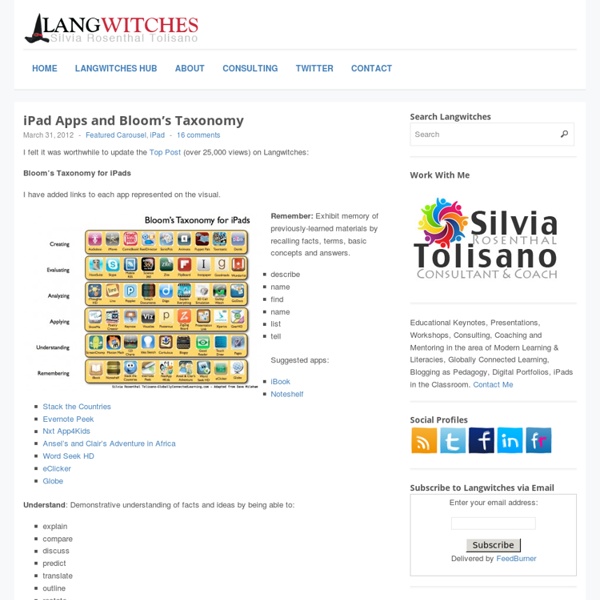 I felt it was worthwhile to update the Top Post (over 25,000 views) on Langwitches: Bloom’s Taxonomy for iPads I have added links to each app represented on the visual. Remember: Exhibit memory of previously-learned materials by recalling facts, terms, basic concepts and answers. describenamefindnamelisttell Suggested apps: Understand: Demonstrative understanding of facts and ideas by being able to: explaincomparediscusspredicttranslateoutlinerestate Suggested Apps: Apply: Using new knowledge. showcompleteuseexamineillustrateclassifysolve Analyze: Examine and break information into parts by identifying motives or causes. compareexamineexplainidentifycategorizecontrastinvestigate Evaluate: Present and defend opinions by making judgments about information, validity of ideas or quality of work based on a set of criteria justifyassessprioritizerecommendratedecidechoose Suggested Apps Create: planinventcomposedesignconstructimagine Related Bloom's Taxonomy and iPad Apps 21. In "Featured Carousel" 7. 29.

Creation Apps Used On The iPad My technology integration specialist asked me to provide a list of creative apps that we have used in our classroom. All the apps are in our tool box, have been used, or will be used. I have included some of the many videos that show students actually using the apps. I have also included the original post if you would like to read the details surrounding the use of the app. Important!

Technology I use on a Daily Basis - updated for this year In the past, I've written about the technology I use on a daily basis at school. I just saw that Richard Byrne did the same thing on his blog this week, so I decided to update my list with what I'm using these days. All of them are free, except for PowerTeacher (paid for by the district) and my smartphone. 1. Smartphone - I just purchased an HTC Droid Incredible 2 from Verizon. I had been using a Palm/HP Pre+ (and loved it, but HP decided not to release anymore hardware).

10 iPad Apps for Web Curation Curation vs. Aggregation? Curation is such a necessity these days. 10 Great, Free Apps for Students for Notetaking and Class Planning These days, there are some great apps for students to use to take notes for class, or to use as class planners. 1. Evernote and EverStudent My favorite is Evernote. I use it for everything, literally, and many of my students use it for taking notes, clipping web pages, creating to do lists, and more. There is also a new Android app available, called EverStudent, that integrates with Evernote and acts as a planner for students. Teacher Dictionary of Terms in Teaching Teachnology The Online Teacher Resource Share on favorites Bookmark It! Share on email Email It! Email Newsletter 30 Examples of Stunning iPad App Interface Design The iPhone ushered in an era of beautiful interface design unlike anything we’d ever seen on a mobile device. This trend is now being revived and pushed further than ever on the iPad’s larger screen and the results are amazing. We’ve combed through the App Store to bring you 30 iPad apps with gorgeous interfaces. Keep in mind that the screenshots rarely do the apps justice and that you really should try a few out for yourself. Flipboard

Apps for Professional Development Twitter App (free) Twitter is one of the most active and beneficial social networks on the web. All educators would be wise to join the conversation. If you haven’t used Twitter yet, I would recommend that you read these excellent blog posts: Google Voice (free)