6 Google Tricks When You Don't Know What to Search For. Despite spending millions of dollars on fancy algorithms, Google Search can sometimes be a fickle beast. 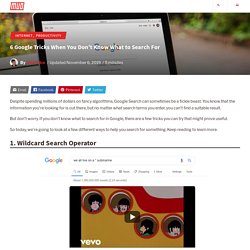 What the Heck is Fake News? (Something everyone should know by now) Sigh. 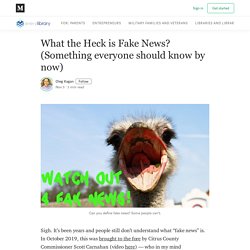 It’s been years and people still don’t understand what “fake news” is. In October 2019, this was brought to the fore by Citrus County Commissioner Scott Carnahan (video here) — who in my mind immediately became known as “Fake News” Carnahan — when he refused to sign-off on the library’s request to renew a New York Times digital subscription for the public because it was “fake news,” declaring, by way of reasoning, that he supported Trump. Sigh. Is this study legit? 5 questions to ask when reading news stories of medical research. Who doesn’t want to know if drinking that second or third cup of coffee a day will improve your memory, or if sleeping too much increases your risk of a heart attack? 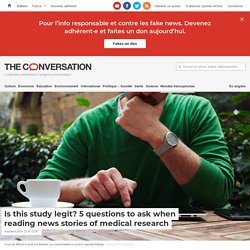 We’re invested in staying healthy and many of us are interested in reading about new research findings to help us make sense of our lifestyle choices. But not all research is equal, and not every research finding should be interpreted in the same way. Nor do all media headlines reflect what was actually studied or found. So how can you tell? Keep these five questions in mind when you’re reading media stories about new studies. In a Data Literacy Crisis, Librarians Could Be the Experts We Need. In his work, Chapters from My Autobiography, Mark Twain famously complained (and attributed to British Prime Minister Benjamin Disraeli), "There are three kinds of lies: lies, damned lies, and statistics. 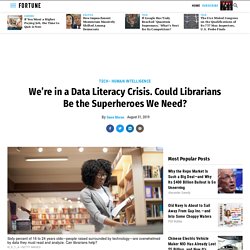 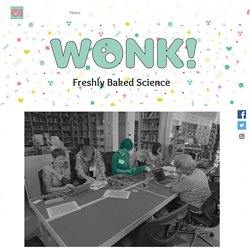 With 1.4 billion users every month, it makes it the 5th most popular website on the internet. You will most likely use the English Wikipedia, or maybe one of the other 300 versions of the site, including Welsh, Jamaican Patois, Latin or Dutch Low Saxon. Most people in the UK have a general understanding of what Wikipedia is and does, but coming up for its 19th birthday, it's had time to become rather big and complex. All the content on the site is made by volunteer editors, but there are charities (like Wikimedia UK) who are responsible for promoting the site, supporting the editors and working with large institutions to encourage them to share their content.

Pseudoscience is taking over social media – and putting us all at risk. Search for “climate change” on YouTube and before long you’ll likely find a video that denies it exists. 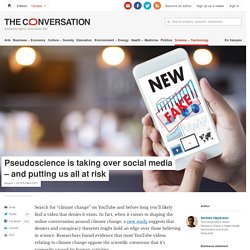 In fact, when it comes to shaping the online conversation around climate change, a new study suggests that deniers and conspiracy theorists might hold an edge over those believing in science. Researchers found evidence that most YouTube videos relating to climate change oppose the scientific consensus that it’s primarily caused by human activities. The study highlights the key role of social media use in the spread of scientific misinformation. And it suggests scientists and those who support them need to be more active in developing creative and compelling ways to communicate their findings. But more importantly, we need to be worried about the effects that maliciously manipulated scientific information can have on our behaviour, individually and as a society.

The videos peddling the conspiracy theories received the highest number of views. 3 things you should know about digital literacies. This is a continuation in my '3 things' short video series. 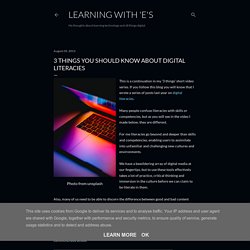 If you follow this blog you will know that I wrote a series of posts last year on digital literacies. Many people confuse literacies with skills or competencies, but as you will see in the video I made below, they are different. For me literacies go beyond and deeper than skills and competencies, enabling users to assimilate into unfamiliar and challenging new cultures and environments. We have a bewildering array of digital media at our fingertips, but to use these tools effectively takes a lot of practice, critical thinking and immersion in the culture before we can claim to be literate in them. A Reminder That 'Fake News' Is An Information Literacy Problem - Not A Technology Problem. Getty Images. 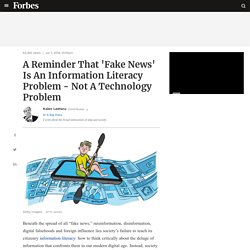 Beneath the spread of all “fake news,” misinformation, disinformation, digital falsehoods and foreign influence lies society’s failure to teach its citizenry information literacy: how to think critically about the deluge of information that confronts them in our modern digital age. Instead, society has prioritized speed over accuracy, sharing over reading, commenting over understanding. Children are taught to regurgitate what others tell them and to rely on digital assistants to curate the world rather than learn to navigate the informational landscape on their own. Schools no longer teach source triangulation, conflict arbitration, separating fact from opinion, citation chaining, conducting research or even the basic concept of verification and validation. Identifying a fake picture online is harder than you might think. It can be hard to tell whether a picture is real. 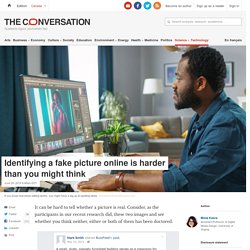 Consider, as the participants in our recent research did, these two images and see whether you think neither, either or both of them has been doctored. You might have based your assessment of the images on the visual information alone, or perhaps factored in your evaluation of how reputable the source is, or the number of people who liked and shared the images. My collaborators and I recently studied how people evaluate the credibility of images that accompany online stories and what elements figure into that evaluation. We found that you’re far less likely to fall for fake images if you’re more experienced with the internet, digital photography and online media platforms – if you have what scholars call “digital media literacy.”

Fans Are Better Than Tech at Organizing Information Online. The urgent need for media literacy in an age of annihilation. From fictitious organizations posting polarizing messages on Facebook to robustly researched news stories being labelled “fake,” the pervasive power and importance of the media are clear. 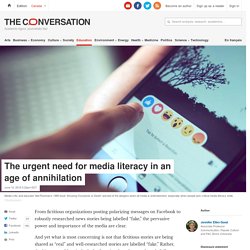 And yet what is most concerning is not that fictitious stories are being shared as “real” and well-researched stories are labelled “fake.” Rather, the biggest problem is the lack of stories about how to thoughtfully address the situation not only through media regulation but also through education. By focusing on media challenges one at a time as they arise, an opportunity is being missed to address the media’s messages and power systemically. Instead, in something akin to a “whack-a-mole” game, problems with social media are treated as isolated issues that keep popping up. Facebook becomes a go-to destination for those wishing to sway an election? Savvy but not quite literate: why we need to transform the way we teach digital literacy in public libraries – Kirsty the Connected Learner.

The digital age is upon us. Of course, we’ve existed within a technological landscape for some time – personal computers have been around for more than 40 years, the internet has now been in the public domain for 26 years, and smartphones have been marketed as such since the early 2000s – but the ubiquity of these technologies, of the internet, is a comparatively new phenomenon. Digital devices and the internet have become an increasingly essential part of our everyday lives. Many of the services we rely on – for banking and paying our bills, for job applications, for accessing our health and government records, for critical information – are moving towards exclusively digital access, whether we are ready for them to do so or not. There’s no denying it – we are no longer able to remain disconnected without risking isolation from the wider community.

How fake news gets into our minds, and what you can do to resist it. Although the term itself is not new, fake news presents a growing threat for societies across the world. Only a small amount of fake news is needed to disrupt a conversation, and at extremes it can have an impact on democratic processes, including elections. How to teach your kids to tell fact from fake news - Marianne Stenger - ABC Splash - Parents play an important role in teaching their kids how to critically evaluate the news. These media literacy skills are vital for kids growing up in the digital age.

MEDIA LITERACY WEEK - Education. Princesses are bigger than elephants: Effect size as a category error in evidence‐based education - Simpson - 2018 - British Educational Research Journal. The size of elephants Adam photographs an elephant. The elephant's image covers 0.2 of the area of the photograph. Belinda photographs another elephant. Her elephant's image covers 0.3 of the area of her photograph. Simon compares these numbers, concluding that the second elephant must be larger.

Correlation vs. Causation: An Example. Foiling Fake News. Made by Tech-Kim & Ms. Fitz Students, teachers, anyone connected to the internet is already running on information overload and now fake news has us all questioning our most trusted sources. Don't tell me you hate AI...check out Google's "Talk to Books" Danah boyd: How Critical Thinking and Media Literacy Efforts Are ‘Backfiring’ Today. Savvy Searching (UK) Determining Website Credibility: A Rubric for Modern Digital Citizenship. Mitchell Kapor said it more eloquently than anyone: “Getting information off the Internet is like taking a drink from a fire hydrant.” This rapid exponential growth of information across the Web makes it all the more difficult in determining website credibility. Our World Wide Web is a living, breathing, and constantly expanding phenomenon. How Americans Approach Facts and Information.

Lexicon of Lies: Terms for Problematic Information. Propaganda, disinformation, misinformation: The words we choose to describe media manipulation can lead to assumptions about how information spreads, who spreads it, and who receives it. These assumptions can shape what kinds of interventions or solutions seem desirable, appropriate, or even possible. Why Fake News Spreads: A Neurological Explanation. The logical part of your brain really, really likes listening to the social part, which just wants to fit in. If efforts by foreign powers to influence American society via disinformation — like the “fake news” that spread during last year’s presidential election — are rising as a national-security concern, then we need to know why such antics work. How to help kids navigate fake news and misinformation online. Question Everything – Kay Oddone – Medium. The Future of Free Speech, Trolls, Anonymity and Fake News Online. Many experts fear uncivil and manipulative behaviors on the internet will persist – and may get worse.

Digital content curation: For students! – Kay Oddone – Medium. Getting Out of the Filter Bubble: Finding The Real You Online. I recently had a great (and timely) conversation with one of the counselors from International School Manila at the EARCOS Teacher’s Conference in Kota Kinnabalu, Malaysia (check out all the resources from all of my sessions here). How “News Literacy” Gets the Web Wrong. Google and Facebook Can’t Just Make Fake News Disappear. Inside The Fake News Fight At Apple, Snapchat, Facebook, And More. Google Should Be a Librarian, not a Family Feud Contestant.

Top 10 sites to help students check their facts. Web Literacy for Student Fact-Checkers. Fake News: A Library Resource Round-Up. 3 Fast, Free Lesson Plans to Fight Fake News. Will we now take information literacy skills seriously? You are the new gatekeeper of the news. Medium, and The Reason You Can’t Stand the News Anymore. Distraction Is Actually Ruining This Country – Backchannel.

Log In - New York Times. How to tell fake news from real news. Did Media Literacy Backfire? – Data & Society: Points. What these teens learned about the Internet may shock you! Teaching in the Post-Truth Era – Jonathan Gold – Medium. Fake News is a Real Problem. Here’s How Students Can Solve It. – John Spencer. In the war on fake news, school librarians have a huge role to play - The Verge. Do Educators Need Media Literacy as Much as Students Do?

Being a librarian in a post-truth society. 10 Ways to Search Google for Information That 96% of People Don’t Know About. Evaluating Websites as Information Sources. How to Cite Pokemon GO in MLA - EasyBib Blog. 6 Great Videos for Teaching Media Fluency. A Simple Rubric for Determining Website Credibility.