The Gateway to Astronaut Photography of Earth 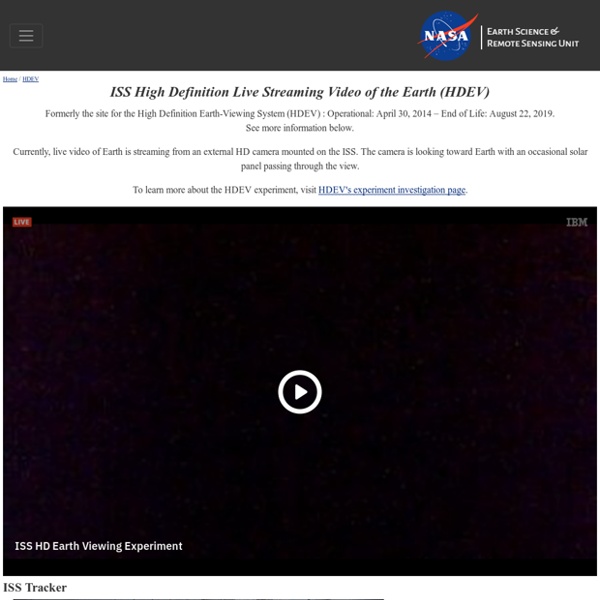 Formerly the site for the High Definition Earth-Viewing System (HDEV) : Operational: April 30, 2014 – End of Life: August 22, 2019. See more information below. Currently, live video of Earth is streaming from an external HD camera mounted on the ISS. The camera is looking toward Earth with an occasional solar panel passing through the view. To learn more about the HDEV experiment, visit HDEV's experiment investigation page. ISS Tracker Black = on the nighttime side of the Earth Gray = The ground support computer has stopped sending video to USTREAM (IBM Video) and will be reset shortly. ISS High Definition Live Streaming Video of the Earth After HDEV stopped sending any data on July 18, 2019, it was declared, on August 22, 2019, to have reached its end of life. Click here to read the Final Report: High Definition Earth Viewing (HDEV). Highlights: For all questions regarding the current external camera or the former HDEV experiment, please contact Carlos Fontanot or Chris Getteau.

ISS HD Earth Viewing Experiment on USTREAM: ***QUICK NOTES ABOUT HDEV VIDEO*** Black Image = International Space Station (ISS) is on the night side of the Black Image = International Space Station (ISS) is on the night side of the Earth. No Audio = Normal. There is no audio by design. Add your own soundtrack. B-17 bomber lodged in glacier for more than 70 years The unique story of a B-17 bomber that was destroyed during World War Two has emerged. Steve Memovich was a US Air Force pilot in the B-17 bomber during the war and survived when the aircraft crashed into a glacier. More than 70 years after his aircraft crashed he received an envelope in the post which contained his silver bracelet with his name, serial number and the inscription – Always yours, Marilyn. The bracelet had belonged to Steve, but he had lost it when his B-17 crashed all those years ago. Steve and his crew had taken off from an Allied base in Iceland in 1944. They were heading back to a base in Scotland, but they ran into bad weather and the B-17 was literally knocked out of the sky in a blizzard and they landed in a glacier known in Icelandic as Eyjafjallajokull.

Meat and potato pie 'sent into space' from Wigan A meat and potato pie has been sent "into space" attached to a weather balloon. The pioneering delicacy was launched from Roby Mill, Wigan, at about 11:30 GMT ahead of the World Pie Eating Championship next week. The aim is to see if its journey up to 100,000ft (30km) changes the molecular structure of the pie making it quicker to eat. It is believed this is the first pie to be launched into the stratosphere. Space enthusiasts from Sheffield-based SentIntoSpace have attached a camera and tracking equipment to the weather balloon and will analyse the data and edit video of its journey. 'Pie's the limit'

First Direct Evidence of Cosmic Inflation Almost 14 billion years ago, the universe we inhabit burst into existence in an extraordinary event that initiated the Big Bang. In the first fleeting fraction of a second, the universe expanded exponentially, stretching far beyond the view of our best telescopes. All this, of course, was just theory. Researchers from the BICEP2 collaboration today announced the first direct evidence for this cosmic inflation. Their data also represent the first images of gravitational waves, or ripples in space-time. These waves have been described as the "first tremors of the Big Bang." Roots Music School - Store Justin Johnson: An American Master A true master’s musicianship holds true to influences, yet follows spirit and heart first, setting aside rules and forging new and inspired art. Maybelle Carter did this, as did Django Reinhardt, Hank Williams, and Jimmie Rodgers. But in our modern world, profound musical originality is rare, and fewer still hold strong to tradition, while moving on to create distinctive new music. If, in this marketed world of overstimulation and oversaturation, you are seeking an artist with distinguishing musicianship and artistry, I recommend you listen to: Justin Johnson.

All-American John Glenn: Astronaut, fighter pilot, senator John Glenn was the ultimate all-American hero. He was the first American to orbit the Earth, a war hero fighter pilot, a record-setting test pilot, a longtime senator, a presidential candidate and a man who defied age and gravity to go back into space at 77. But those were just his accomplishments. What made John Glenn was more his persona: He was a combat veteran with boy next door looks, a strong marriage and nerves of steel. Schools were named after him. Children were named after him.

Typhoon Haiyan as seen from space: The best images from the web Devastating, powerful and deadly, typhoons can cause unimaginable destruction. For those of us lucky enough to be outside their path, they are also one of mother nature’s most magnificent spectacles, often best viewed from above. Here are our favourite satellite images of Typhoon Haiyan (Yolanda), the biggest typhoon ever recorded, from our news sources and around the web. If you want to catch up on the latest Typhoon Haiyan developments you can find our latest report here. Pic: AP. This first image came in from Associated Press Thursday and clearly shows Typhoon Haiyan (Yolanda) approaching the Philippines from the east. First Welding Project - Plywood Rack For Truck - Wilker Do's Of the many items I’ve had on my “things to do” list, I’ve been super excited about two of them in particular: learning how to weld and building a plywood rack for my old pickup. Fortunately Lincoln Electric recently reached out and asked if I would be interested in trying out their new Power MIG 210MP. Naturally, I was totally on board. For my first welding project I decided to make a rack for the bed of my truck bed to allow me to haul plywood flat and elevated. It’s a pretty simple project, especially if you already know how to weld. Things I Used In This Project:

Visions of the Future Imagination is our window into the future. At NASA/JPL we strive to be bold in advancing the edge of possibility so that someday, with the help of new generations of innovators and explorers, these visions of the future can become a reality. As you look through these images of imaginative travel destinations, remember that you can be an architect of the future. Click on any of the thumbnails below to learn more and download a free poster sized image. › Learn more about the posters