Cracking the Code of Life 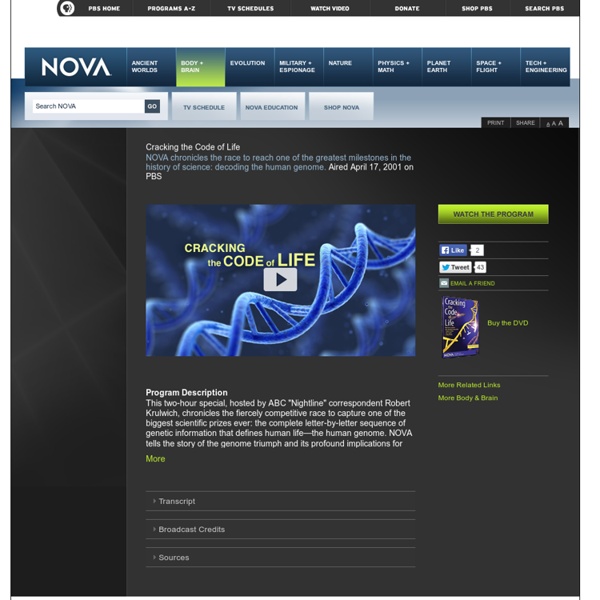 Cracking the Code of Life PBS Airdate: April 17, 2001 ROBERT KRULWICH: When I look at this—and these are the three billion chemical letters, instructions for a human being—my eyes glaze over. But when scientist Eric Lander looks at this he sees stories. ERIC LANDER (Whitehead Institute/MIT): The genome is a storybook that's been edited for a couple billion years. And you could take it to bed like A Thousand and One Arabian Nights, and read a different story in the genome every night. ROBERT KRULWICH: This is the story of one of the greatest scientific adventures ever, and at the heart of it is a small, very powerful molecule, DNA. For the past ten years, scientists all over the world have been painstakingly trying to read the tiny instructions buried inside our DNA. J. ROBERT KRULWICH: And what it's telling us is so surprising and so strange and so unexpected. ERIC LANDER: How different are you from a banana? ERIC LANDER: You may feel different... ROBERT KRULWICH: I eat a banana. We asked Dr.

Genetic pedigrees In these diagrams, people are represented by symbols, usually circles for female and squares for male, and the bottom line represents the children of the couple above. For simplicity, 4 offspring are shown in these examples. However, in practice the number, proportion and order of birth are likely to vary. Obviously, the same technique of family trees can be used to show the results of animal breeding. It is customary to use dark symbols to indicate someone affected with a genetic condition, and unfilled symbols for those who are unaffected. In the explanations that follow, an intermediate grey colour is used to assist in understanding the effect of a heterozygote carrier.

How DNA Was Discovered A Scientific Breakthrough The sentence "This structure has novel features which are of considerable biological interest" may be one of science's most famous understatements. It appeared in April 1953 in the scientific paper where James Watson and Francis Crick presented the structure of the DNA-helix, the molecule that carries genetic information from one generation to the other. Nine years later, in 1962, they shared the Nobel Prize in Physiology or Medicine with Maurice Wilkins, for solving one of the most important of all biological riddles. DNA- The ins and outs! Watson and Crick's Paper Watson and Crick published a paper that described the complementary structure of DNA. This paper rocked the science world and illuminated the structure of DNA!

Was Rosalind Franklin Robbed? The views expressed are those of the author and are not necessarily those of Scientific American. It’s remarkable what can happen when James Watson isn’t in the room. The Nobel laureate, known for his brilliance as well as his large ego and small superego, was expected to participate in a panel discussion Tuesday night about the play "Photograph 51," which focuses on Rosalind Franklin and her x-ray diffraction work in the early 1950s at King’s College London that contributed to discoveries of the molecular structure of DNA, first published in 1953. Watson, Francis Crick and Maurice Wilkins received the Nobel Prize in medicine or physiology in 1962 for this work, four years after Franklin’s death of ovarian cancer, possibly induced by her work with x-rays.

10 talks on the future of stem cell medicine Will the next generation think about diseases like Alzheimer’s and diabetes the way we think about polio and the whooping cough? Susan Solomon, the co-founder of the New York Stem Cell Foundation (NYSCF), certainly hopes so. In this fascinating talk from TEDGlobal 2012, Solomon delves into the foundation’s work on research with stem cells, which she calls the “black boxes for diseases.” “[Stem cells] are our bodies’ own repair kits. They are pluripotent, which means they can morph into all of the cells in our bodies,” says Solomon. “Right now there are some really extraordinary things that we are doing with stem cells that are completely changing the way we model disease, our ability to understand why we get sick and even develop drugs.

DNA Testing Completes Picture of king Tut Two years of DNA testing and CT scans on Tut's 3,300-year-old mummy and 15 others are helping end many of the myths surrounding the boy king. While a comparatively minor ruler, he has captivated the public since the 1922 discovery of his tomb, which was filled with a stunning array of jewels and artifacts, including a golden funeral mask. The study, which will be published Wednesday in the Journal of the American Medical Association, provides the firmest family tree yet for Tut.

What are stem cells? - Craig A. Kohn Stem cells are a rapidly advancing field of biological research. Since Dr. James Thomson first cultivated human embryonic stem cells at the University of Wisconsin - Madison in the late 1990s, this field of researched has exploded with potential. 3D Animations - DNA Molecule: How DNA is Packaged (Basic) DNA Molecule: How DNA is Packaged (Basic) DNA packaging. Each chromosome consists of one continuous thread-like molecule of DNA coiled tightly around proteins, and contains a portion of the 6,400,000,000 basepairs (DNA building blocks) that make up your DNA. The way DNA is packaged into chromatin is a factor in how protein production is controlled. Duration: 1 minutes, 30 seconds Transcript: In this animation we'll see the remarkable way our DNA is tightly packed up so that six feet of this long molecule fits into the microscopic nucleus of every cell.

DNA Fingerprints In this lesson, students learn how DNA fingerprinting has been used in criminal investigations. They do an interactive Web activity to learn about the process of DNA fingerprinting. In teams, they interpret different DNA fingerprints, then do a jigsaw activity to explore other uses of DNA forensics. Finally, they listen to a radio program about using DNA as evidence and discuss the limitations of and problems with DNA testing. Use these resources to create a simple assessment or video-based assignment with the Lesson Builder tool on PBS LearningMedia. 1.