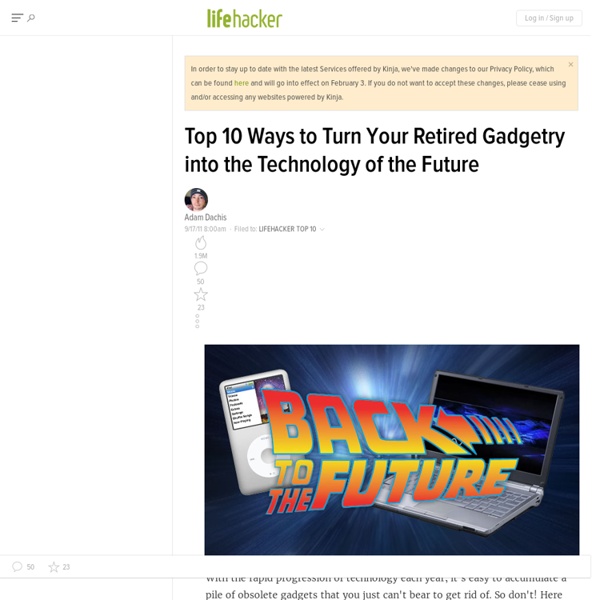 SExpand I have written How-Tos for many of them, but I concentrate on the "why" answers, not the "how". There are lots of places on the internet with step-by-step guides. That isn't my best skill, I know this. When I do attempt to explain how-to, I don't deal with GUIs unless absolutely necessary. Why not? For folks who want an all-in-one solution, [www.zentyal.org] seems reasonable to get most of those things with a web GUI. There's also [www.howtoforge.com] with step-by-step instructions for commonly needed configurations from desktops (search for "Perfect Desktop") to servers (search for "Perfect Server"). * LinuxQuestions.org is helpful. * The forums for your distro-of-choice can be very helpful. * Your local LUG. Effort is required. I may start a series of articles on doing this once Ubuntu Server 11.10 comes out. * copy/paste, * edit a few local things for your situation, then you'll be golden.

6 Insane Discoveries That Science Can't Explain We like to feel superior to the people who lived centuries ago, what with their shitty mud huts and curing colds by drilling a hole in their skulls. But we have to give them credit: They left behind some artifacts that have left the smartest of modern scientists scratching their heads. For instance, you have the following enigmas that we believe were created for no other purpose than to fuck with future generations. The Voynich Manuscript The Mystery: Lifestyle Design Experiments This is the place where you find all the lifestyle design experiments I'm sharing online. A lifestyle design experiment is where we take a simple idea or radical lifestyle concept and give it a test run in our lives. We're only obligated to it for 30 days, enough time to form it into a habit.

Top 10 Things You Can Upgrade with a Little Electronics Hacking it is a skill to do a good solder joint, it comes with LOTS of practice. so most people who rarely do it will ever get good at it. Bingo. Of course, part of the issue is having a soldering iron at the right temp with a properly tinned tip. Newbies aren't using soldering stations but a cheap iron they got at rat shack (You have questions? faster Bookmarks as magazines on the web Once you have collected a list of bookmarks, wouldn’t it be nice to share them on the web à la Flipboard or as Paper.li does? Licorize booklets allow you just that. The process of editing the collected contents and presenting them on the web is called "curation"; Licorize can be a great curation tool.

15 Mindblowingly Awesome Chemistry GIFs You don’t need to watch Breaking Bad to know that chemistry is pretty awesome. Below, we explore our favorite 15 chemistry GIFs and the science behind them (when we could figure it out): Melting Metal With Magnets The Science: The copper wire has a significant amount of AC electricity running through it, causing it to act like a really strong electromagnet. In the metal slug, eddy currents form due to the magnetic field the copper wire is causing while the copper wire has high frequency AC flowing through it. The metal slug’s electric resistance causes a portion of the electric energy to turn into heat, but the heat builds up until the metal slug becomes white hot and melts.

Top 10 DIY Tech Gifts @keyboard-vomit: Yeah, but wouldn't it be awesome if some of our not so tech friends actually attempted (and accomplished) one or more of these feats? I mean, when "it's the thought that counts," shouldn't it be a thought about something we'd actually appreciate. Then again, maybe socks are your thing. ;) Why? Collect bookmarks and more - Licorize begins as a bookmarking tool, providing a non-intrusive “add bookmark with one click” functionality. It is integrated in browsers, with plugins, extensions and bookmarklets, provides readability features, multi tagging, site thumbnails and more as evolution of bookmarking. But Licorize shows its shining power once one gets back to the list of what has been bookmarked.

Flexbook – Laptop Concept by Hao-Chun Huang Flexible Notebook Has Sexy Features I call myself a concept technology glutton because I can devour the most bizarre and hypothetical features, in the hope that someday we will make those advances and sexy, psycho gadgets will rule! My hope is kept alive with concepts like the Flexbook that sports key features like a flexible joint that allows you to fold and configure the laptop to become tablet or a notebook in a jiffy. Specs include a waterproof keypad, swappable rubber skins, 21:9 – 180-degree swivel touch screen that make it an eBook, tablet and notebook in one go.

Films for families: The top 50 movies to watch as a family From the high-flying Mary Poppins to an animated singing mermaid, Time Out Kids ranks the 50 best films for families. By David Fear Mon Aug 13 2012 The 5,000 Fingers of Dr. T (1953) Lemon Cleanse LEMON DRINK for your Master Cleanseyou need:* 2 tablespoons FRESH squeezed lemon or lime juice (approx. 1/2 lemon)* 2 tablespoons genuine organic maple syrup, Grade B (the darker the better)** 1/10 teaspoon (a small pinch!) cayenne pepper, gradually increase (the more BTUs the better)* 300 - 500 ccm (10-14 oz) pure waterIn a 300ccm (10-ounce) glass (to allow for 227ccm and mixing room): 2 tablespoons fresh (and organic, if possible) lemon or lime juice (absolutely no canned or frozen juice). 2 tablespoons real (and organic, if possible) grade B or C maple syrup. (Don't use Grade A maple syrup or maple-flavored syrup. They are over-refined, which means that they are mostly refined sugars and lack essential minerals.) A small pinch of cayenne pepper (to taste). Spring or purified water, between room temperature and medium hot (but not cold) – fill to 1/4 liter (8 oz).