Harvard cracks DNA storage, crams 700 terabytes of data into a single gram. A bioengineer and geneticist at Harvard’s Wyss Institute have successfully stored 5.5 petabits of data — around 700 terabytes — in a single gram of DNA, smashing the previous DNA data density record by a thousand times. 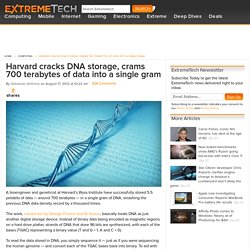 The work, carried out by George Church and Sri Kosuri, basically treats DNA as just another digital storage device. Instead of binary data being encoded as magnetic regions on a hard drive platter, strands of DNA that store 96 bits are synthesized, with each of the bases (TGAC) representing a binary value (T and G = 1, A and C = 0). To read the data stored in DNA, you simply sequence it — just as if you were sequencing the human genome — and convert each of the TGAC bases back into binary. The Morphogenetic Field & The Future of DNA. Christina Sarich, ContributorWaking Times Our genes have long been ballyhooed as either a death-sentence, or the Midas touch of genius, bestowing upon us pristine health and an agile mind, or the deterministic outcome of cancer, neurological disease, or various other birth ‘defects’, but what if there was something else helping to determine our fate? 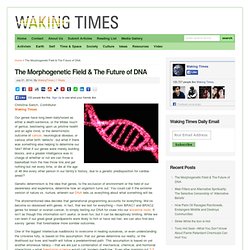 What if our genes were merely building blocks, and a greater intelligence was in charge of whether or not we can throw a basketball from the free throw line and get nothing but net every time, or die at the age of 46 like every other person in our family’s history, due to a genetic predisposition for cardiac arrest? Genetic determinism is the idea that genes, to the exclusion of environment or the field of our awareness and experience, determine how an organism turns out. You could call it the extreme version of nature vs. nurture, wherein our DNA tells us everything about what something will be. Dr. Dr. About the Author. The Whole Truth - Sevan Bomar - Esoteric Radio - 11-18-12. Reprogramming Your Junk DNA. Every now and then I come across a stunning example of pseudoscience, an exemplar, almost raising pseudoscience to an art form. 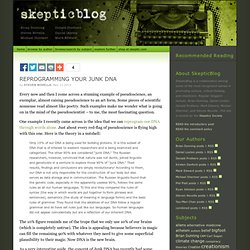 Some pieces of scientific nonsense read almost like poetry. Such examples make me wonder what is going on in the mind of the pseudoscientist – to me, the most fascinating question. Science Theory Shows We Can Reprogram Our DNA to Heal Ourselves with Vibration. As though to confirm the hunch many of us had that our ‘junk’ DNA was anything but disposable, researchers from the Gene and Stem Cell Therapy Program at Sydney’s Centenary Institute have proven that 97 percent of human DNA programs or encodes proteins in our bodies. One of the researchers involved in this study said, “this discovery, involving what was previously referred to as “junk,” opens up a new level of gene expression control . . .” 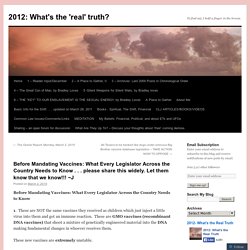 These are NOT the same vaccines they received as children which just inject a little virus into them and got an immune reaction. TEDxIowaCity - Dr. Terry Wahls - Minding Your Mitochondria. Researchers Finally Show How Mindfulness and Your Thoughts Can Induce Specific Molecular Changes To Your Genes. Michael Forrester, Prevent DiseaseWaking Times With evidence growing that training the mind or inducing specific modes of consciousness can have beneficial health effects, scientists have sought to understand how these practices physically affect the body. 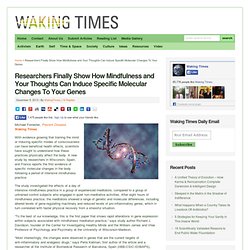 A new study by researchers in Wisconsin, Spain, and France reports the first evidence of specific molecular changes in the body following a period of intensive mindfulness practice. The Vagus Nerve and the Healing Promise of The Sudarshan Kriya. Frank Huguenard, Staff WriterWaking Times At the center of our bodies resides a long, sinewy nerve that extends all the way from our medullas down through our chests to beyond our stomachs. 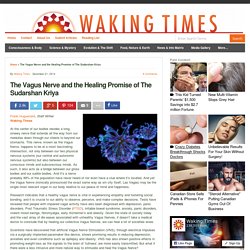 This nerve, known as the Vagus Nerve, happens to be at a most fascinating intersection, not only between our two physical nervous systems (our central and autonomic nervous systems) but also between our conscious minds and subconscious minds. As such, it also acts as a bridge between our gross bodies and our subtle bodies. And it’s a nerve probably 99% of the population have never heard of nor even have a clue where it’s located. And yet the Vagus Nerve (ironically pronounced the exact same way as sin city itself, Las Vegas) may be the single most relevant organ in our body relative to our peace of mind and happiness. Automated Habit Formation Our consciousness’s natural tendency is to compartmentalize tedious tasks so that the brain can focus on higher priority activities.