Connectify - Turn your Windows 7 laptop into a WiFi Hotspot 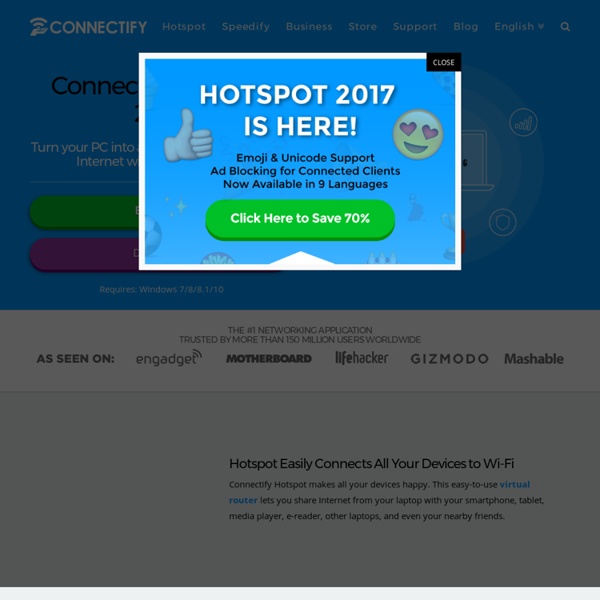 The 33 Essential Free Utilities for Every New PC The Windows ecosystem is filled with more programs than we will ever need. But while you know to install essential programs like Firefox and Steam onto every new PC, there are plenty of core utilities you should install before downloading any application software. We pick out the 33 most useful utilities that enhance the Windows operating system. These aren't apps used for productivity (like word processing or web browsing) or entertainment (like video playback or gaming).

Download details: SyncToy 2.1 SyncToy 2.1 is a free application that synchronizes files and folders between locations. Typical uses include sharing files, such as photos, with other computers and creating backup copies of files and folders. Note: There are multiple files available for this download. Once you click on the “Download” button, you will be prompted to select the files you need. Overview There are files from all kinds of sources that we want to store and manage. Files are created by our digital cameras, e-mail, cell phones, portable media players, camcorders, PDAs, and laptops.

Review Of Cross-Browser Testing Tools - Smashing Magazine Advertisement Today, too many websites are still inaccessible. In our new book Inclusive Design Patterns, we explore how to craft flexible front-end design patterns and make future-proof and accessible interfaces without extra effort. Five Best DVD-Ripping Tools - dvd ripping - Lifehacker @diabillic: There's a less expensive version of the CinemaCraft encoder (CCE) that does most of what the pricey one does (just limits the number of passes). For those curious, the point here is that most re-encoders don't so much re-encode as drop macro blocks, resulting in a picture that's not as good as it could be. CCE (the pro version) is AFAIK the product used by the studios. If this sounds interesting, I'd suggest checking out DVD Rebuilder ([www.jdobbs.com]) which sits "on top" of CCE and drives the process (CCE's pretty arcane to learn DVDRB is easy).

jrmwillis MusicBridge allows people who use both iTunes and WMP on the same machine to keep their libraries in sync. MusicBridge offers a variety of synchronization options so that you can manage your music collection in either media player or both. Originally developed to handle the problem that although WMP can play AAC files with the correct codec it does not read any of the tag information. MusicBridge is and always has been offered fully functional for free.

Top 8 Programs That Can Make Your Computer Run Faster It’s a common problem among computer users: after a few months, our computers become weighed down by programs and all sorts of other junk, and inevitably become sluggish. For the less tech-savvy users, this may induce thoughts like “Why is my computer so terrible?” or “I guess I could always upgrade this… what-cha-ma-callit RAM thing”. Snagit, screen capture software, home page Context is everything. Recording a video lets the person on the other end actually hear your voice. So the next time a webpage, PDF, or video edit is sent to you for feedback, consider dropping the red pen and record a video instead. With Snagit, there’s no waiting. You can record your video, and share it within seconds. Webcam recording - Toggle between webcam and screen recording during a video to add a personal touch with teammates or clients, no matter where they are.

So You Wanna Change Your Default Browser In Vista? I have been using Vista Beta 2 for a while now and there is one thing that continues to frustrate me. Microsoft has designed the User Account Control (UAC) to work so perfectly that it will be difficult for the average person to switch the default browser. After installing Vista you can open up the Control Panel and the first thing that I do is switch to the classic view. Tool Blunts Threat from Windows Shortcut Flaw Microsoft has released a stopgap fix to help Windows users protect themselves against threats that may try to target a newly discovered, critical security hole that is present in every supported version of Windows. Last week, KrebsOnSecurity.com reported that security researchers in Belarus had found a sophisticated strain of malware that was exploiting a previously unknown flaw in the way Windows handles shortcut files. Experts determined that the malware exploiting the vulnerability was being used to attack computers that interact with networks responsible for controlling the operations of large, distributed and very sensitive systems, such as manufacturing and power plants. When Microsoft initially released an advisory acknowledging the security hole last week, it said customers could disable the vulnerable component by editing the Windows registry. For instance, most Windows users are familiar with these icons: Further reading:

Download Defraggler 1.09.138 Most defrag tools only allow you to defrag an entire drive. Defraggler lets you specify one or more files, folders, or the whole drive to defragment. When Defraggler reads or writes a file, it uses the exact same techniques that Windows uses. Soluto Figures Out What’s Bogging Down Your PC (And Tells You How To Fix It) They say a car loses half its value the minute you drive it off the lot. The same can often seem true of a brand new computer — after that lightning-quick first boot or two, PCs have the nasty habit of gradually bogging down until that new quad core processor doesn’t seem much faster than the last one you had. Enter TC Disrupt finalist Soluto, a startup that’s looking to help restore your computer to its former glory. And better yet, it’s going to hold those bloated, CPU hogging applications accountable.