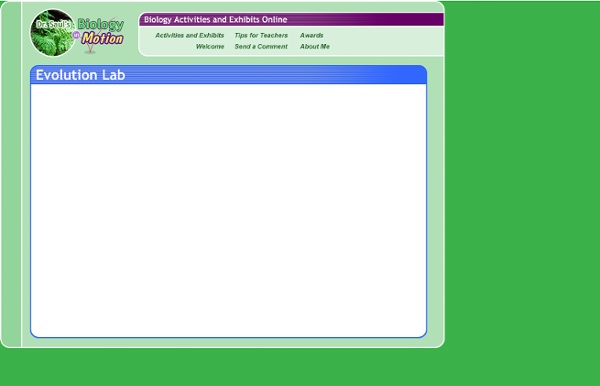 Nuclear reactor and power plant simulation Introduction This is not a lesson like the others in Radioactivity and Atomic Physics Explained but it fits in well with the lesson on nuclear power. It is a very sophisticated simulation of a pressurised water reactor (PWR), which is the most common type of nuclear power reactor in the US but not in Europe, though the principles are very similar. Using the tour There is a comprehensive tour which goes through the workings of the reactor, starting from a consumer of electrical energy and working backwards to the reactor core itself.

The PCR Method - a DNA Copying Machine Lists of Nobel Prizes and Laureates The PCR Method - a DNA Copying Machine Play the Eye of the Donkey Game About the game PCR is a method by which a few fragments of DNA can be duplicated into millions in a couple of hours. This makes PCR a very useful method in, amongst other fields, forensic science. BluePeopleLab Fourni par Traduction Biology Lab The. Blue People Of Troublesome Names:Creek, KY Who Evolved on First? Bud Abbott and Lou Costello While I was writing this post, I heard that Bill Nye and Ken Ham are planning to have a debate about evolution and creation. While it could be an interesting conversation, I suspect that it will suffer from the same communication problems that afflict most of these debates.

Physics Flash Animations We have been increasingly using Flash animations for illustrating Physics content. This page provides access to those animations which may be of general interest. The animations will appear in a separate window. The animations are sorted by category, and the file size of each animation is included in the listing. Also included is the minimum version of the Flash player that is required; the player is available free from The categories are: In addition, I have prepared a small tutorial in using Flash to do Physics animations. vamnies on Vodpod - Videos about Or join with email Or Join with Email By joining, you agree to our Terms of Use and Privacy Policy. Or Sign in with email Hands-on Activities for Teaching Biology to High School or Middle School Students by Drs. Ingrid Waldron and Jennifer Doherty, University of Pennsylvania The expression "hands-on, minds-on" summarizes the philosophy we have incorporated in these activities - namely, that students will learn best if they are actively engaged and if their activities are closely linked to understanding important biological concepts. Many of our activities are explicitly aligned with the Next Generation Science Standards, as indicated by (NGSS) in the descriptions below and the links to the right. Additional information is provided in Summary Tables and in the Teacher Preparation Notes for these activities.

The Zoo of You By Neil Shubin Posted 10.26.09 NOVA You may not feel much like a shark, fruit fly, or worm, but you share many aspects of your anatomy and physiology with these and all other animals on Earth. All the various bits and pieces of you–organs, bones, nerves, even your genes–show up in different but fundamentally similar forms in other animals, in some cases animals that lived half a billion years ago, revealing how all creatures on Earth, including you, are just variations on a theme. Launch Interactive In this interactive, see how closely parts of your body match those in other animals, from sharks to fruit flies. The Transistor Lists of Nobel Prizes and Laureates The Transistor Play the Transistor Recycler Game About the game A transistor is made of a solid piece of a semiconductor material and either used as switches, to turn electronic signals on or off – or, as amplifiers. Read More »

Tongue Rolling and 5 Other Oversimplified Genetic Traits Can you roll your tongue? If so, you’re part of the majority. Between 65 and 81 percent of people on Earth have this strange and seemingly arbitrary talent. But why can some do it while others can’t?