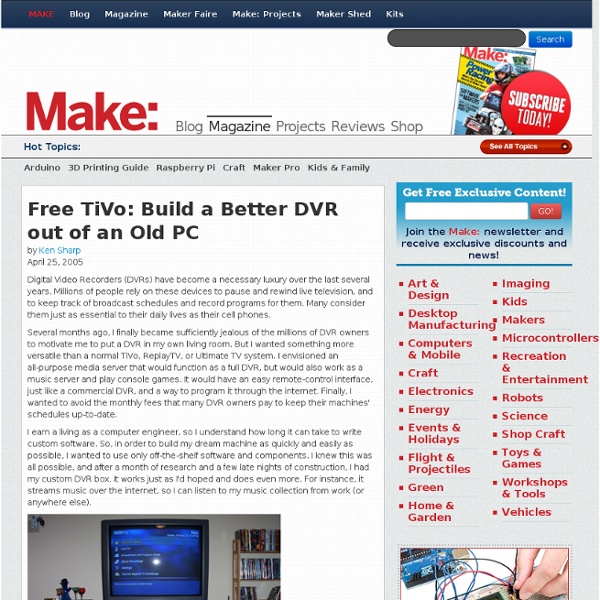 by Ken Sharp April 25, 2005 Digital Video Recorders (DVRs) have become a necessary luxury over the last several years. Millions of people rely on these devices to pause and rewind live television, and to keep track of broadcast schedules and record programs for them. Many consider them just as essential to their daily lives as their cell phones. Several months ago, I finally became sufficiently jealous of the millions of DVR owners to motivate me to put a DVR in my own living room. I earn a living as a computer engineer, so I understand how long it can take to write custom software. Here's how I did it. You'll need: with at least 256MB of RAM (512MB is better), plenty of hard drive space, and a good video card. presumably from your existing home theater system). I used a Hauppauge WinTV-PVR-250 card, $149 at hauppauge.com . I used BeyondTV, which was bundled with the Hauppauge card, but is available from SnapStream separately for $70 at snapstream.com . Automation software, $20 at promixis.com

Hack Your Door to Lock and Unlock via Text Message @hahn: I don't know about all that. With the right safeguards in place, I think this would be secure enough for my tastes: 1. 2. 3. 4. 5. 6. Believe it or not, I'd feel a bit more secure with this system (with some tweaks) than a traditional lock-and-key system for the same reason I feel better about having extraneous cards in my wallet: If my phone (or overstuffed wallet) is missing, I'm going to know it.

How Google Builds Its Maps—and What It Means for the Future of Everything - Alexis C. Madrigal An exclusive look inside Ground Truth, the secretive program to build the world's best accurate maps. Behind every Google Map, there is a much more complex map that's the key to your queries but hidden from your view. The deep map contains the logic of places: their no-left-turns and freeway on-ramps, speed limits and traffic conditions. This is the data that you're drawing from when you ask Google to navigate you from point A to point B -- and last week, Google showed me the internal map and demonstrated how it was built. Google opened up at a key moment in its evolution. And for good reason. "If you look at the offline world, the real world in which we live, that information is not entirely online," Manik Gupta, the senior product manager for Google Maps, told me. This is not just a theoretical concern. Google is locked in a battle with the world's largest company, Apple, about who will control the future of mobile phones. But that would entail actually building a better map.

Super Simple Audio Cellbot Step #1: PrevNext There are two ways to get the parts that you will need for this project. The easy way is to buy a kit from robots.allthingsgeek.com. Step #2: Solder up the board. Step #5: There are a couple of different ways to control your robot. How to Make a Static Electricity Generator—Shock Anything and Fry Electronics with Just a Touch! « NightHawkInLight In the following video, I demonstrate how to create a device capable of charging the body of anyone who wears it with static electricity, allowing a powerful shock to be discharged into anything that is touched. This grants the wearer the ability to do some pretty amazing things, some of which are shown in the first segment of the video. The parts used in this project are fairly inexpensive, totaling about $30, assuming some things are already lying around the house (such as spare wire and tape). In the list of parts below, I give some information to help locate the harder to find items. Parts that can be purchased online: Negative ion generator (ionizer) (I bought mine here—search for SW-750) Automotive power converter (cheapest here, or find one at an auto parts store) Parts that can be purchased in a hardware or electronics store (such as RadioShack): Flux core solder 2" of copper wire Heat shrink insulating tubing (optional) 9 volt battery (DO NOT USE A LARGER POWER SOURCE! Tools:

Downwind Faster Than The Wind Cart This instructable will take you through the construction of a working model of the wind powered cart that answers the question that sparked so much controversy across dozens of internet forums. It resulted in tens of thousands of posts of heated debates, on-line and print articles in Make, Popular Science, Wired, Der Spiegel, and many other magazines and blogs around the world, and has appeared on the Discovery Channel's "The Daily Planet". My buddy and I built a full-sized manned version of the vehicle (see the video of the "Blackbird" above) and established a world record for direct downwind speed of a wind powered vehicle. We've spoken at NASA, AIAA, Stanford, SJSU, and a number of other venues on this controversial topic, and won the Editor’s Choice award at the 2011 Maker Faire. The question: Is it possible to make a wind powered vehicle that goes directly downwind, faster than the wind, steady-state? Learning objective: Critical thinking!

Laptop Parts 101 Build a Touchless 3D Tracking Interface with Everyday Materials Combine low-tech materials with some high-tech components and build a completely Touchless 3D Tracking Interface. Explore capacitive sensing by using several panels of cardboard lined with aluminum foil. These panels, when charged, create electric fields that correspond to X, Y, and Z axes to create a 3D cube. With the aid of an Arduino microcontroller and some supplied code, movements inside the cube are tracked as your hand moves around inside the field. For Weekend Projects makers looking for an introduction to Arduino, this is a great project to learn from. Once your touchless 3D tracker is up and running, what you do with it is only limited by your own imagination! Make an RGB or HSB color pickerControl video or music parameters; sequence a beat or melodyLarge, slightly bent surface with multiple plates + a projector = “Minority Report” interface More: See all of the Weekend Projects posts Related