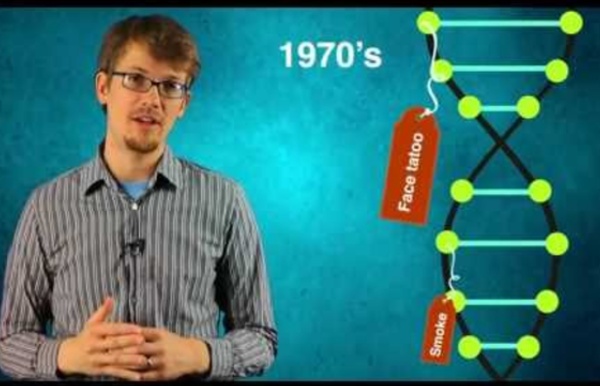 Related:  Intro to Genetics DNA Structure and Function • 1.5 How genes are expressed

Genetic pedigrees In these diagrams, people are represented by symbols, usually circles for female and squares for male, and the bottom line represents the children of the couple above. For simplicity, 4 offspring are shown in these examples. However, in practice the number, proportion and order of birth are likely to vary. Obviously, the same technique of family trees can be used to show the results of animal breeding. It is customary to use dark symbols to indicate someone affected with a genetic condition, and unfilled symbols for those who are unaffected. Dominant allele, e.g. Genetic explanation Since the condition is shown in some of the first generation offspring but not in some others, this is not a simple cross between 2 different homozygotes. Note also that in this case the appearance of the condition is independent of the sex of the individual. Genetic diagram Recessive allele, e.g Cystic fibrosis Genetic diagrams For the first section (parents giving rise to the first generation): Example 1 Example 2

Recombinant Green Fluorescent Protein-Expressing Human Cytomegalovirus as a Tool for Screening Antiviral Agents Cell Differentiation | BioNinja Understanding: • Specialised tissues can develop by cell differentiation in multicellular organisms • Differentiation involves the expression of some genes and not others in a cell’s genome Differentiation Differentiation is the process during development whereby newly formed cells become more specialised and distinct from one another as they mature All cells of an organism share an identical genome – each cell contains the entire set of genetic instructions for that organism The activation of different instructions (genes) within a given cell by chemical signals will cause it to differentiate Cell Specialisation via Differential Gene Expression Gene Packaging Within the nucleus of a eukaryotic cell, DNA is packaged with proteins to form chromatin Active genes are usually packaged in an expanded form called euchromatin that is accessible to transcriptional machineryInactive genes are typically packaged in a more condensed form called heterochromatin (saves space, not transcribed)

NOVA | Cracking the Code of Life Cracking the Code of Life PBS Airdate: April 17, 2001 ROBERT KRULWICH: When I look at this—and these are the three billion chemical letters, instructions for a human being—my eyes glaze over. But when scientist Eric Lander looks at this he sees stories. ERIC LANDER (Whitehead Institute/MIT): The genome is a storybook that's been edited for a couple billion years. And you could take it to bed like A Thousand and One Arabian Nights, and read a different story in the genome every night. ROBERT KRULWICH: This is the story of one of the greatest scientific adventures ever, and at the heart of it is a small, very powerful molecule, DNA. For the past ten years, scientists all over the world have been painstakingly trying to read the tiny instructions buried inside our DNA. J. ROBERT KRULWICH: And what it's telling us is so surprising and so strange and so unexpected. ERIC LANDER: How different are you from a banana? ERIC LANDER: You may feel different... ROBERT KRULWICH: I eat a banana. We asked Dr.

Introspection illusion The surface appearance of an iceberg is often used to illustrate the human conscious and unconscious mind; the visible portions are easily noticed, and yet their shape depends on the much larger portions that are out of view. The introspection illusion is a cognitive bias in which people wrongly think they have direct insight into the origins of their mental states, while treating others' introspections as unreliable. In certain situations, this illusion leads people to make confident but false explanations of their own behavior (called "causal theories"[1]) or inaccurate predictions of their future mental states. The illusion has been examined in psychological experiments, and suggested as a basis for biases in how people compare themselves to others. Components[edit] The phrase "introspection illusion" was coined by Emily Pronin.[5] Pronin describes the illusion as having four components: Unreliability of introspection[edit] Factors in accuracy[edit] Unawareness of error[edit]

Related:
Related:  Intro to Genetics DNA Structure and Function   -  1.5 How genes are expressed