The Periodic Table of Videos - University of Nottingham 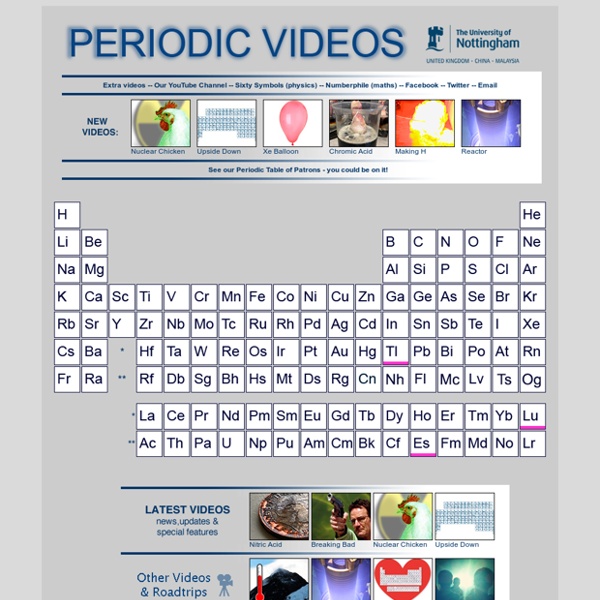 Tables charting the chemical elements have been around since the 19th century - but this modern version has a short video about each one. We've done all 118 - but our job's not finished. Now we're updating all the videos with new stories, better samples and bigger experiments. Plus we're making films about other areas of chemistry, latest news and occasional adventures away from the lab. We've also started a new series - The Molecular Videos - featuring our favourite molecules and compounds. All these videos are created by video journalist Brady Haran, featuring real working chemists from the University of Nottingham.

Solar System Science Fair Project Science Fair Projects Solar System 3D Simulator is a FREE software application that generates a realistic solar system model and planets in 3 Dimension on the PC using advanced physics formulas. It can display the planets and their orbits, the sun and the moon. The nine planets including planet earth and their detailed physical & chemical information and image pictures is also displayed including solar power, solar energy and solar eclipse details. 2012 March 12 - The Scale of the Universe Interactive Discover the cosmos! Each day a different image or photograph of our fascinating universe is featured, along with a brief explanation written by a professional astronomer. 2012 March 12 The Scale of the Universe - Interactive Flash Animation Credit & Copyright: Cary & Michael Huang

The Science Behind Foldit Foldit is a revolutionary new computer game enabling you to contribute to important scientific research. This page describes the science behind Foldit and how your playing can help. What is a protein? Proteins are the workhorses in every cell of every living thing. USA Hands-On Universe USA-HOU is hosting the Global HOU conference this year at Western Kentucky University in Bowling Green, Kentucky, 15-21 August 2017, in the path of totality of the 21 August 2017 American Solar Eclipse! See the conference website and list of participants (not all on the list actually attended). See maps of the eclipse’s path of totality. Hands-On Universe (HOU) is an educational program that enables students to investigate the Universe while applying tools and concepts from science, math, and technology. Using the Internet, HOU participants around the world request observations from an automated telescope, download images from a large image archive, and analyze them with the aid of user-friendly image processing software.