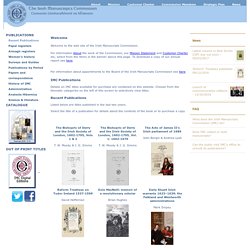 For information About the work of the Commission, our Mission Statement and Customer Charter etc, select from the items in the banner above this page. To download a copy of our annual report see here For information about appointments to the Board of the Irish Manuscripts Commission see here IMC Publications Details on IMC titles available for purchase are contained on this website. Recent Publications Listed below are titles published in the last two years. Select the title of a publication for details about the contents of the book or to purchase a copy T. John Bergin & Andrew Lyall David Heffernan Brian Hughes Mark Empey Colm Lennon Steven Ellis & James Murray James Kelly. BBC Radio 4 - Thinking Allowed, Terrorism: does it work? - The 'Hotline' CFP: Material and Visual Cultures of Commemoration in Ireland from c.1800. Call for Papers International conference ‘Object Matters: Making Memory: material and visual culture of commemoration in Ireland c.1800 - 2016’ 13-15 October 2016 National Gallery of Ireland, Merrion Square, Dublin 2 Funded by the Irish Research Council 'New Foundations' Scheme Deadline for proposals 12 July, 2016 Proposals of c.300 words accompanied by a short CV are invited for 20-minute papers related to the material and visual culture of commemoration in Ireland from c.1800 to the present day. 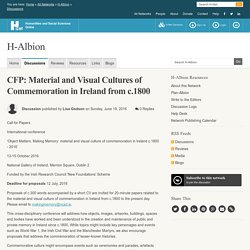 This cross-disciplinary conference will address how objects, images, artworks, buildings, spaces and bodies have worked and been understood in the creation and maintenance of public and private memory in Ireland since c.1800. The conference should contribute to our understanding of how ideas about the past have been visualised, manufactured, articulated, materialised, distributed and performed.

Academic Journals. Irish History in Film. Irish Political Cartoon Gallery. Whether or it be in the English press or here at home in "respected" American publications, throughout much of the 19th century and even into the 20th century, the Irish have been stereotyped much like other races of people. 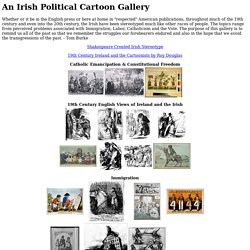 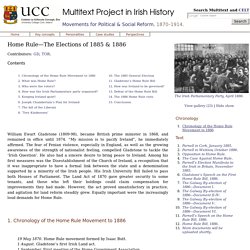 “My mission is to pacify Ireland”, he immediately affirmed. The fear of Fenian violence, especially in England, as well as the growing awareness of the strength of nationalist feeling, compelled Gladstone to tackle the ‘Irish Question’. He also had a sincere desire to bring peace to Ireland. Among his first measures was the Disestablishment of the Church of Ireland, a recognition that it was inappropriate to have a formal link between the state and a denomination supported by a minority of the Irish people. His Irish University Bill failed to pass both Houses of Parliament. 1. 19 May 1870. 2. ‘Home Rule’ is the name of the movement that aimed to get internal government for Ireland within the British Empire. The nationalist organisation, the National League, was formed in October 1882 as a replacement for the suppressed Land League. 3. 4. 5. 6. 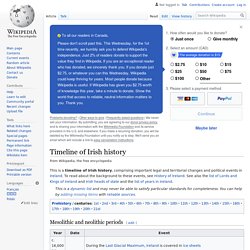