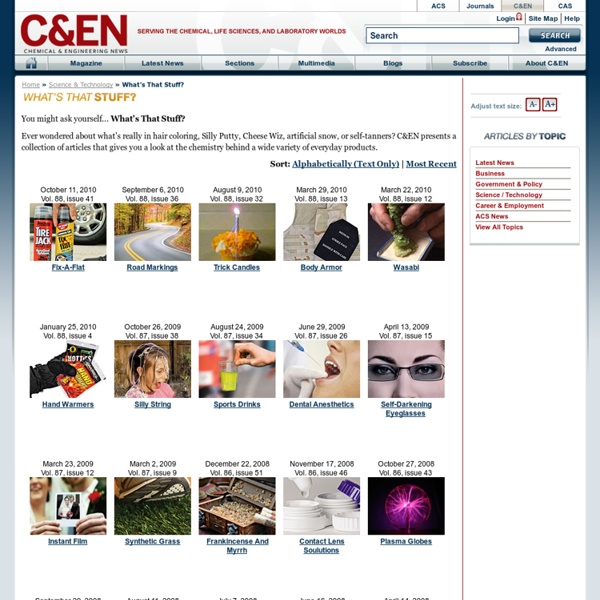 You might ask yourself... What's That Stuff? Ever wondered about what's really in hair coloring, Silly Putty, Cheese Wiz, artificial snow, or self-tanners? C&EN presents a collection of articles that gives you a look at the chemistry behind a wide variety of everyday products. Sort: Alphabetically (Text Only) | Most Recent

Budget Update Improving Economy Can’t Keep Up With Spending Growth: The good news is that California’s economy is growing and tax revenue is on the rise. The Governor projects Big 3 Revenues1 to grow by $4.5 billion in 2012-13. This means more money in the bank to fund priorities like our public school classrooms and public safety. Unfortunately, the Governor’s Budget would increase spending so much next year that it will outpace the state’s revenue growth: The Governor’s January 2012 budget assumes that General Fund spending will grow $6 billion to $92.6 billion – a 7% increase from the adjusted 2011-12 budget2. 30% Spending Increase Over Next 4 Years The Governor’s budget proposal assumes that with his tax increase, General Fund spending will increase $30 billion over the next four years. Education Spending: General Fund spending for California’s K-12 public schools is projected to grow by almost $4 billion – from $34.2 billion in 2011-12 to $38.2 billion in 2012-133. Health and Welfare Spending:

Online Literature How Products Are Made PRISMS Official Website The Legend of Korra The Legend of Korra is an American animated television series set in the Avatar universe as a sequel series to Avatar: The Last Airbender. The premiere episode aired on Nickelodeon on April 14, 2012. However, the first two episodes were released online on March 24–25, 2012[9] and were available in high-definition for free on iTunes. The series is currently under production and is expected to run for two seasons, spanning four books and a total of fifty-two episodes.[1] The new series takes place seventy years after the end of the Avatar: The Last Airbender story arc with brand new characters and settings.[5] The protagonist of the new series, Korra, the Avatar after Aang, is a hot-headed and rebellious young woman from the Southern Water Tribe who is "ready to take on the world".[10] The series follows Korra as she faces the difficult challenges, duties, and responsibilities that come with being the Avatar. Plot overview Main article: List of The Legend of Korra episodes Book One: Air

Internet Public Library Chemistry Help | Wyzant Resources In our chemistry help section, you'll find a broad range of topics from very basic chemistry all the way through some more advanced organic chemistry topics. Browse our chemistry topics below, or contact one of our chemistry tutors for private help. Heuristics Before you get into the other topics, learning HOW to learn chemistry is a great place to start, and this section will help. The Periodic Table Almost everyone has heard of the periodic table, but do you know how to read it? Elements Take a deep dive on every element on the periodic table. Solutions Mixtures and solutions may seem to have a lot in common, but they're actually very different. States of Matter Matter has a variety of different states, ranging from gases to solids. Compounds What are the different bonds and how do you create a compound? Reactions Let's learn more about writing simple chemical equations and types of reactions. Moles and Percents What are moles and why do we need them? Basic Stoichiometry Gases Acids and Bases

NSTA Formative Science Probes Upload Our Class Homepage maxclassonline Loading... Working... ► Play all NSTA Formative Science Probes maxclassonline10 videos2,330 viewsLast updated on Sep 14, 2014 Play all Sign in to YouTube Sign in History Sign in to add this to Watch Later Add to Loading playlists... My Collection of Funny Emails. Send funny emails to your friends! Reynolds Wrap has lock in taps to hold the roll in place The color on the bread tab indicates how fresh the bread is And those colors are in alphabetical order: b, g, r, w, y. You can divide and store ground meat in a zip loc bag. Just break off how much you need and keep the rest in the freezer for later. If you place a wooden spoon over a pot of boiling water, it won't boil over. Marshmallows can cure a soar throat. Stuffing a dryer sheet in your back pocket will repel mosquitoes. You can freeze cupcake batter for later use. You can paint upholstery You can make your own laundry soap. . You can dye plastic buttons. You can run a paper bag through your printer. You can print directly onto fabric. A dry erase marker can be used on most desk tops. You can mail anything that will take a stamp and weighs less than 13ounces without a box? If you break your blender jar you can replace it with a mason jar. Cereal canisters make the perfect trashcan for your car.