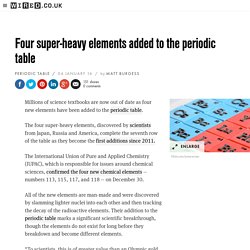 The four super-heavy elements, discovered by scientists from Japan, Russia and America, complete the seventh row of the table as they become the first additions since 2011. The International Union of Pure and Applied Chemistry (IUPAC), which is responsible for issues around chemical sciences, confirmed the four new chemical elements -- numbers 113, 115, 117, and 118 -- on December 30. UNHISTORICAL.

The Fundamental Forces of Nature

Scientists Discover New Element: Meet Ununseptium, Element 117. Image via WikiMedia Scientists just announced that they have created and observed a new super-heavy element— element 117, which had been temporarily dubbed “ununseptium.” 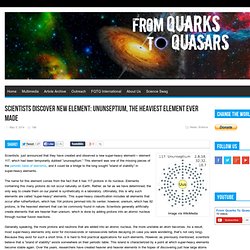 This element was one of the missing pieces of the periodic table of elements, and it could be a bridge to the long sought “island of stability” in super-heavy elements. The name for this element comes from the fact that it has 117 protons in its nucleus. Elements containing this many protons do not occur naturally on Earth. Rather, as far as we have determined, the only way to create them on our planet is synthetically in a laboratory. Generally speaking, the more protons and neutrons that are added into an atomic nucleus, the more unstable an atom becomes.

The 120-meter long linear accelerator at GSI, which accelerated the calcium-ions used to produce element 117. This newest find brings us a bit closer to determining if this island actually exists. Ununseptium Jolene Creighton. Scientists Create Element 117, Which Is 40% Heavier Than Lead. Element 117, a super-heavy atom with a long half-life is, according to an international team of scientists, real and ready to take its place on the Periodic Table. 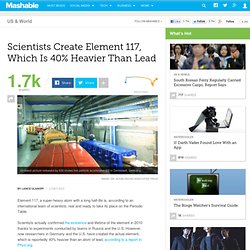 Scientists actually confirmed the existence and lifetime of the element in 2010 thanks to experiments conducted by teams in Russia and the U.S. However, now researchers in Germany and the U.S. have created the actual element, which is reportedly 40% heavier than an atom of lead, according to a report in Phys.org. Rare earths: Neither rare, nor earths. 22 March 2014Last updated at 20:40 ET By Justin Rowlatt BBC World Service You have probably never heard of most of the rare-earth elements yet they have insinuated themselves deep into the fabric of modern life - in ways of which most of us are completely oblivious. 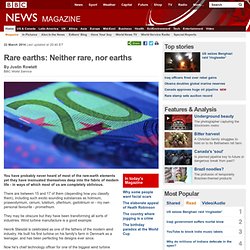 There are between 15 and 17 of them (depending how you classify them), including such exotic sounding substances as holmium, praseodymium, cerium, lutetium, ytterbium, gadolinium or - my own personal favourite - promethium. They may be obscure but they have been transforming all sorts of industries. Wind turbine manufacture is a good example. Two new elements are named on the Periodic Table - even though they've only ever existed for less than a second. Elements created in Russian particle acceleratorElement 114 is now 'Flerovium' - named after the lab where it was createdScientists unable to discover their properties as they disappear so quickly By Rob Waugh Published: 09:46 GMT, 1 June 2012 | Updated: 09:46 GMT, 1 June 2012 They have only ever existed for less than a second, but two new elements were named yesterday - Flerovium and Livermorium. 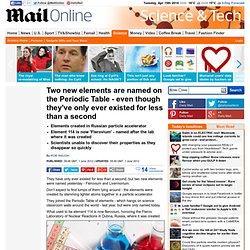 Don't expect to find lumps of them lying around - the elements were created by slamming lighter atoms together in a particle accelerator. Modern alchemy: Turning a line. What Is An Element. Want to stay on top of all the space news? 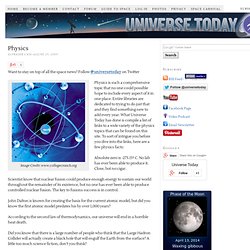 Follow @universetoday on Twitter Image Credit: www.collegecrunch.org Physics is such a comprehensive topic that no one could possible hope to include every aspect of it in one place. Entire libraries are dedicated to trying to do just that and they find something new to add every year. What Universe Today has done is compile a list of links to a wide variety of the physics topics that can be found on this site. Absolute zero is -273.15º C. Scientist know that nuclear fusion could produce enough energy to sustain our world throughout the remainder of its existence, but no one has ever been able to produce controlled nuclear fusion. John Dalton is known for creating the basis for the current atomic model, but did you know the first atomic model predates his by over 1,000 years? Tom Lehrer's "The Elements" animated. Element 'ununseptium' to fill periodic table gap. Rachel Courtland, reporter Welcome, ununseptium. 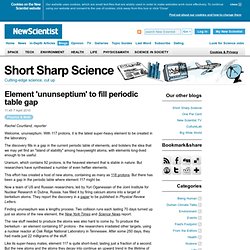 With 117 protons, it is the latest super-heavy element to be created in the laboratory. The discovery fills in a gap in the current periodic table of elements, and bolsters the idea that we may yet find an "island of stability" among heavyweight atoms, with elements long-lived enough to be useful. Uranium, which contains 92 protons, is the heaviest element that is stable in nature. But researchers have synthesised a number of even heftier elements. This effort has created a host of new atoms, containing as many as 118 protons. Now a team of US and Russian researchers, led by Yuri Oganessian of the Joint Institute for Nuclear Research in Dubna, Russia, has filled it by firing calcium atoms into a target of berkelium atoms. Finding ununseptium was a lengthy process. The raw stuff needed to produce the atoms was also hard to come by. Honoring Copernicus – Three New Elements Added To The Periodic Table. Want to stay on top of all the space news? 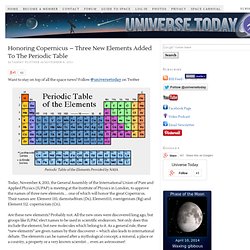