Richard Hammond's Invisible Worlds - Water Strider. 2 Common Liquids Spontaneously Form Dancing Droplets [Video] Nate Cira was working in a lab as an undergraduate at University of Wisconsin–Madison when he saw something unusual. 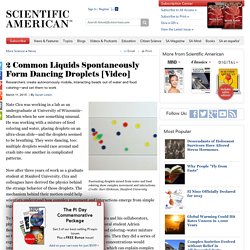 He was working with a mixture of food coloring and water, placing droplets on an ultra-clean slide—and the droplets seemed to be breathing. They were dancing, too: multiple droplets would race around and crash into one another in complicated patterns. Now after three years of work as a graduate student at Stanford University, Cira and colleagues have derived the physics behind the strange behavior of those droplets. The mechanism behind their motion could help scientists understand how complex movement and interactions emerge from simple ingredients.

To figure out what was going on inside these droplets Cira and his collaborators, physical biology researcher Manu Prakash and postdoctoral student Adrien Benusiglio, placed tiny tracer beads in droplets of the food coloring–water mixture so that they could see the flow of fluids within the droplets. Key%20for%20Energy%20Dynamics%20Lab%2013. Say What? Lake Champlain Is Undergoing Turnover And Seiche. To the casual observer, Lake Champlain might seem pretty calm right now. 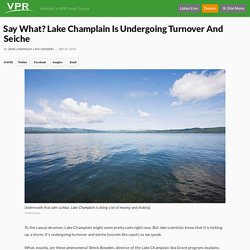 But lake scientists know that it is kicking up a storm. It's undergoing turnover and seiche (sounds like saysh) as we speak. What, exactly, are these phenomena? Breck Bowden, director of the Lake Champlain Sea Grant program, explains. Biochemistry Review Activity - Clear Biology. This biochemistry review activity features free interactives from the Concord Consortium’s Next-Generation Molecular Workbench. 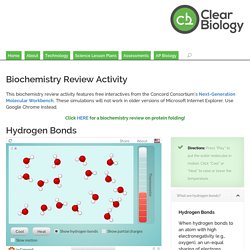 These simulations will not work in older versions of Microsoft Internet Explorer. Use Google Chrome instead. Click HERE for a biochemistry review on protein folding! Use information from the “Hydrogen Bonds” interactive to answer questions 1-4 Q1: Describe the relationship between temperature and the movement of the water molecules. Instant Ice Crystals - The Secret Life of Ice - BBC Four. Chemist With Visual Flair Answers Burning Food Science Questions. Chemistry teachers don't need to go the way of Breaking Bad's Walter White and make methamphetamine if they're looking for a compelling side gig. 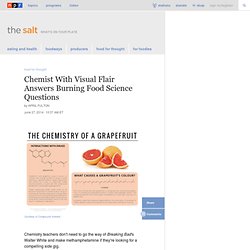 Andy Brunning, a high school chemistry teacher in the U.K., makes beautiful infographics on everyday chemistry on his blog, Compound Interest. Thanks in part to the American Chemical Society, which has turned several of his posts into videos, his clever visuals have been going viral. View larger image Unsurprisingly, his most popular posts are generally about food and drink. Lighting Up Celery Stalks. Plants and trees need water for growth and food production. The process through which water is transported throughout a plant begins at the roots. Water absorbed from the roots of a plant will travel through a series of long thin tubes, or veins, that stretch from the stem to the leaves. In this activity, students will conduct a series of hands-on experiments that will demonstrate how the working of these veins, known as capillary action, enables water to travel throughout the length of a plant. 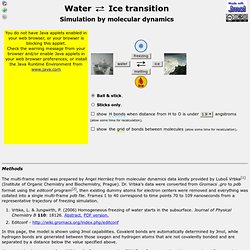 Dr. Vrbka's data were converted from Gromacs .gro to pdb format using the editconf program[2], then existing dummy atoms for electron centers were removed and everything was collated into a single multi-frame pdb file. Free biology Animations - Learnerstv. Acids. Animationsindex.

Chemistry Review. Summary A water molecule has no overall or “net” charge. 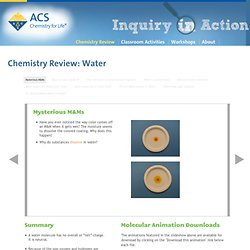 It is neutral. Because of the way oxygen and hydrogen are bonded together, water has an area of positive charge and an area of negative charge. This makes the water a polar molecule. Because of water’s polarity, water molecules are attracted to each other. Molecular Animation Downloads The animations featured in the slideshow above are available for download by clicking on the "Download this animation" link below each file. 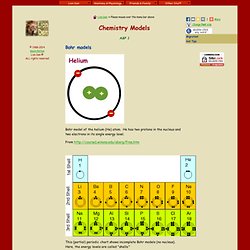 From In this covalent bond, two H atoms "share" their single electrons, to form a pair of shared electrons. Building Elements. Every textbook I've seen introduces protons, electrons, and neutrons as the building block of atoms, and they do it in a nonchalant, matter-of-fact manner. 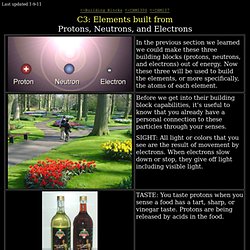