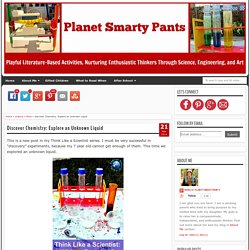 I must be very successful in “discovery” experiments, because my 7 year old cannot get enough of them. This time we explored an unknown liquid. Setting Up an Experiment I set up a liquid discovery experiment with three different types of “white substances” – cornstarch, soda and cream of tartar. I also added several test tubes, water to make solutions, and a brown “unknown liquid” – iodine solution. Learning to Plan an Experiment My daughter immediately wanted to dump some of the unknown liquid into one of the “white stuff” containers, but I stopped her and pointed out that this will immediately “contaminate” her substance. Describe the Results Eventually Smarty went wild in her testing and started dumping her unknown liquid into our containers. Why these colored water droplets seem to be alive. Tonight, Sept. 2, the season finale of the year’s best TV show will air. 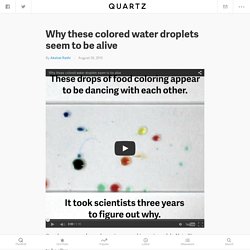 It won’t be on the perennially prestigious HBO or AMC. Instead, it’ll air on USA Network, a cable channel with a middling reputation, previously known best for the glossy legal drama Suits. But USA is living in Mr. Robot‘s world now, and so should the rest of us. Creating a good TV show is preposterously difficult. How Bubbles Work and 20 Things to Do with Them - Left Brain Craft Brain. We all know that kids love bubbles. 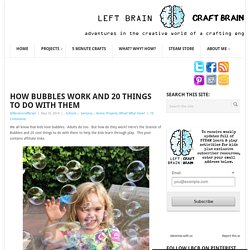 Adults do too. But how do they work? Here’s the Science of Bubbles and 20 cool things to do with them to help the kids learn through play. This post contains affiliate links. Bubble Science- Square Bubbles. (This post may contain affiliate links. 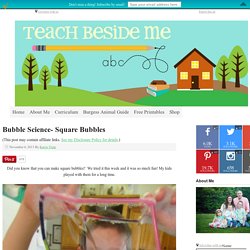 Did you know that you can make square bubbles? We tried it this week and it was so much fun! My kids played with them for a long time. It is simple to make. Bubble Prints! - After experimenting with several ways of doing bubble prints, I think I found a way that works well. 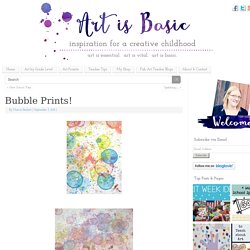 I poured some kids bubbles into small containers. Then, I mixed a few drops of food coloring into the containers. The bubbles were cheapo and weren’t really bubbly, so I added some dish soap as well. Candle Science Magic Trick - Blow Out a Candle Using Science. Updated December 05, 2014. 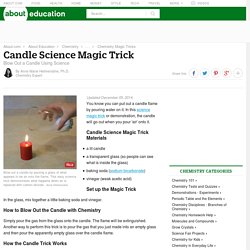 You know you can put out a candle flame by pouring water on it. In this science magic trick or demonstration, the candle will go out when you pour 'air' onto it. Candle Science Magic Trick Materials a lit candlea transparent glass (so people can see what is inside the glass)baking soda (sodium bicarbonate)vinegar (weak acetic acid) Set up the Magic Trick In the glass, mix together a little baking soda and vinegar. Free kids chemistry experiment.

Ongoing chatter from a materials girl wondering about what matters. Metal mesh with oleophobic coating keeps oil on top while water passes through. 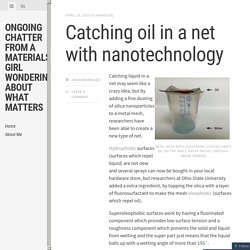 (Image source) Which food gives the most energy? Chemistry for kids - How to separate water into hydrogen and oxygen using electrolysis - Navigating By Joy. Chemistry. Unwrapping the chemistry of Christmas - Dr Mark Lorch, University of Hull. How many chemicals do you think your body interacts with at Christmas? 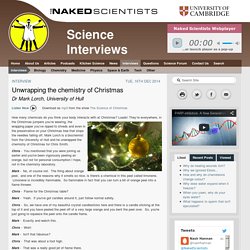 Loads! They’re everywhere, in the Christmas jumpers you’re wearing, the wrapping paper you’ve ripped to shreds and even in the preservative on your Christmas tree that stops the needles falling off. Mark Lorch is a biochemist from the University of Hull and he unwrapped the chemistry of Christmas for Chris Smith. Chris - You mentioned that you were joining us earlier and you've been vigorously peeling an orange, but not for personal consumption I hope, not in the chemistry laboratory. Mark - No, of course not. Chris - Flame for the Christmas table? Mark - Yeah. Chris - So, we have one of my beautiful crystal candlesticks here and there is a candle sticking at the top of it and you have peeled the peel off of a very large orange and you bent the peel over. Mark - Exactly and watch this. 20 Must-Try Winter Science Experiments for Kids.

Glow in the Dark Slime - Playdough To Plato. How To Make Easy Slime Bat Sensory Play. Quick And Simple Recipe For Making Bat Slime Hands-On Activities For Play And Learning Love all the great science and sensory play options for Fall and Halloween. 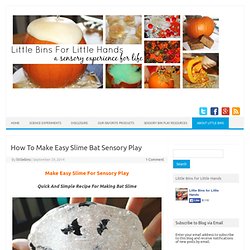 Of course, bat slime can be anytime of the year for a study on bats or your favorite super hero! This recipe truly is that simple. I like it simple and I like to keep it real, meaning you follow this and it will work! California Trees Nailed As The Source Of Mystery Infections. The Canary Island pine is one tree species that hosts a fungus that causes disease in humans. 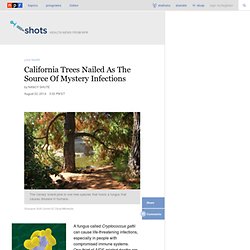 Matter and Chemistry. Activity Detail. Sylvia's Super Awesome Mini Maker Show: Crazy Putty. Chemistry World. Hot water freezes faster than cold - and now we know why. Hot water seems to freeze faster than cold water, known as the Mpemba effect. The effect was named after the Tanzanian student who in 1963 noticed that hot ice cream mix freezes faster than a cold one. The effect was first observed by Aristotle in the 4th century BC, then later Francis Bacon and René Descartes. Mpemba published a paper on his findings in 1969.

Theories for the Mpemba effect have included: faster evaporation of hot water, therefore reducing the volume left to freeze; formation of a frost layer on cold water, insulating it; and different concentrations of solutes such as carbon dioxide, which is driven off when the water is heated. Unfortunately the effect doesn’t always appear - cold water often does actually freeze faster than hot, as you would expect. Now a team of physicists from the Nanyang Technological University in Singapore, led by Xi Zhang, have found evidence that it is the chemical bonds that hold water together that provide the effect. Chemistry. Nobel.scas.bcit.ca/chemed2005/tradingPost/TUPM_S2_4_15ChemFunGames.pdf.