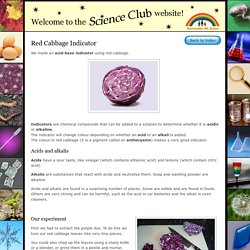 Indicators are chemical compounds that can be added to a solution to determine whether it is acidic or alkaline. The indicator will change colour depending on whether an acid or an alkali is added. The colour in red cabbage (it is a pigment called an anthocyanin) makes a very good indicator. Acids and alkalis Acids have a sour taste, like vinegar (which contains ethanoic acid) and lemons (which contain citric acid). Alkalis are substances that react with acids and neutralise them. Acids and alkalis are found in a surprising number of places. Our experiment First we had to extract the purple dye. You could also chop up the leaves using a sharp knife or a blender, or grind them in a pestle and mortar. We put the chopped cabbage into a jug, poured hot water onto it and left it for a few minutes. 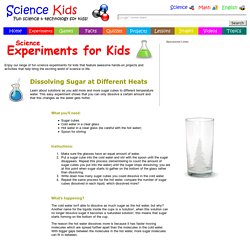 Chapter 5: The Water Molecule and Dissolving. Have students work in groups to design an experiment to investigate whether the temperature of water affects the amount of M&M coating that dissolves. 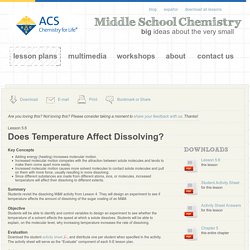 Remind students of the experiment they did in Lesson 4 in which they placed an M&M in water and watched the colored sugar coating dissolve. In that experiment, students used water and then alcohol and oil to see if the solvent used affects the dissolving of the M&M coating. Ask students: What could you investigate about M&M’s dissolving in water? 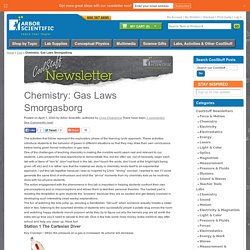 These activities introduce students to the behavior of gases in different situations so that they may draw their own conclusions before being given formal instruction in gas laws. One of the challenges of teaching chemistry is making the invisible world seem real and relevant to our students. Labs present the best opportunity to demonstrate this, but too often we, out of necessity, begin each lab with a litany of “don’ts” (don’t eat food in the lab, don’t touch the acids, don’t look at the bright light being given off, etc) and it is rather rare that the material we study in chemistry lends itself to an experiential approach.

I put this lab together because I was so inspired by Chris’ “smorg” concept. I wanted to see if I could generate the same kind of enthusiasm and elicit the “ah-ha” moments from my chemistry kids as he routinely does with his physics students. Visual Elements and Periodic Table History. Diffusion and Osmosis experiments « The Kitchen Pantry Scientist. Diffusion is the name for the way molecules move from areas of high concentration, where there are lots of other similar molecules, to areas of low concentration, where there are fewer similar molecules. 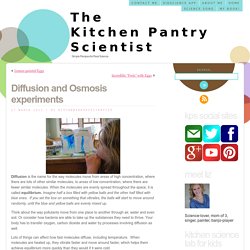 When the molecules are evenly spread throughout the space, it is called equilibrium. Imagine half a box filled with yellow balls and the other half filled with blue ones. The Amazing Water Trick - Investigating Density - Navigating By Joy. 19 Jan 2014 This fun science trick demonstrates that hot and cold water have different densities. 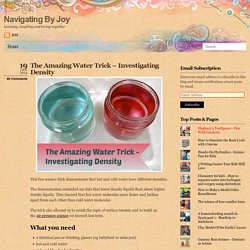 The demonstration reminded my kids that lower density liquids float above higher density liquids. They learned that hot water molecules move faster and further apart from each other than cold water molecules. The trick also allowed us to revisit the topic of surface tension and to build on the air pressure science we learned last term. What you need 2 identical jars or drinking glasses (eg babyfood or salsa jars)hot and cold waterred and blue food colouringindex cards or similarscissorsa large shallow dish to catch spills What you do 1. 2. 2. 3. 4. 5. 6. How to Stack Liquids in a Rainbow of Layers, a Fun Kid Science Project. Do your kids like to stack blocks into tall, gravity-defying towers? 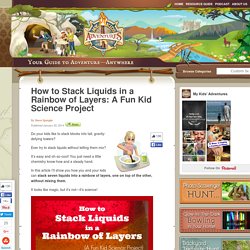 Ever try to stack liquids without letting them mix? It’s easy and oh-so-cool! You just need a little chemistry know-how and a steady hand. In this article I’ll show you how you and your kids can stack seven liquids into a rainbow of layers, one on top of the other, without mixing them. It looks like magic, but it’s not—it’s science! Why Stack Liquids? It’s important to teach kids basic scientific concepts so they’ll understand how the world around them works. When you make it fun or exciting or even jaw-droppingly awesome, you capture kids’ attention, pique their curiosity and make them want to learn more.

Stacking liquids achieves all three. Science Secret—Density So, let’s start with the science: This experiment is based on density. Density measures how much mass is contained in a given unit volume (Density = Mass / Volume). Rainbow in a Glass Density Demonstration. Chameleon food for kids and the curious (molecular gastronomy) pH indicators: 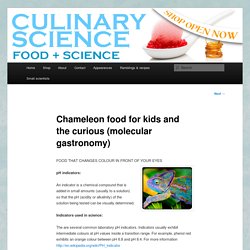 Welcome to NanoSpace! Food Science Experiments. These food science experiments are to teach kids about science in the kitchen. 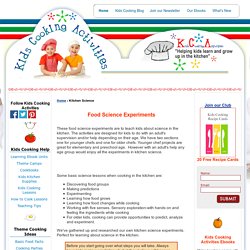 The activities are designed for kids to do with an adult's supervision and/or help depending on their age. We have two sections one for younger chefs and one for older chefs. Younger chef projects are great for elementary and preschool age.