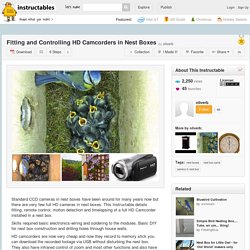 This Instructable details fitting, remote control, motion detection and timelapsing of a full HD Camcorder installed in a nest box. Skills required basic electronics-wiring and soldering to the modules. Basic DIY for nest box construction and drilling holes through house walls. HD camcorders are now very cheap and now they record to memory stick you can download the recorded footage via USB without disturbing the nest box. They also have infrared control of zoom and most other functions and also have very good quality sound. Most have standard video out so the video can be monitored on small LCD monitors and also iCatcher software can be used to capture and stream live video from your boxes to your PC or mobile device. Due to the size of camcorders a custom made nest box is required and needs to be fitted with 12v power, lights and PIR sensors. 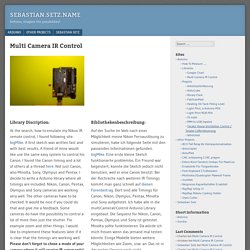 A first sketch was written fast and with best results. A friend of mine would like use the same easy system to control his Canon. I found the Canon timing and a lot of others at a thread here. Not just Canon, also Minolta, Sony, Olympus and Pentax. Bibliothekenbeschreibung: Auf der Suche im Web nach einer Möglichkeit meine Nikon Fernauslösung zu simulieren, habe ich folgende Seite mit den passenden Informationen gefunden. bigMike. To Do: Canon test, thanks FrankOlympus test, thank you StevePentax test, thx AndriesMinolta test, thank you HansSony test, thanks to Walterget the Code more tightGot more functions, zoom and more. View topic - How to sent a hex ir remote code. HiHere is the code. 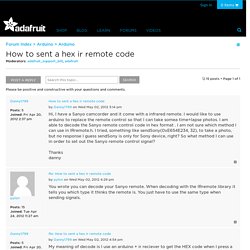 As I said earlier, I just modify the codes to serve the purpose. I have tested the sketch that it transmit the code(IR signals). Because I monitor the signals by installing IRreceiver&LED. However my Pioneer banned player did not play. LANC control with Arduino. Background LANC is a serial protocol available in most Sony and Canon videocameras. 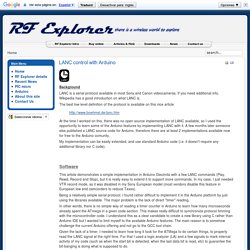 If you need additional info, Wikipedia has a good introduction on what LANC is. The best low level definition of the protocol is available on this nice article At the time I worked on this, there was no open source implementation of LANC available, so I used the opportunity to learn some of the Arduino features by implementing LANC with it.

A few months later someone else published a LANC source code for Arduino, therefore there are at least 2 implementations available now for free to the Arduino comunity. LANC controller. Control Your Camera: Arduino powered simple LANC remote. This is a follow up on the previous post on starting video recording using the LANC port. 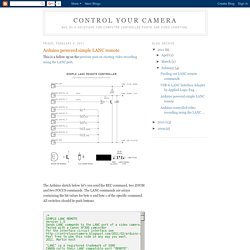 The Arduino sketch below let's you send the REC command, two ZOOM and two FOCUS commands. The LANC commands are arrays containing the bit values for byte 0 and byte 1 of the specific command. Résultat de la recherche - studioSPORT. Zoomduino – Arduino Zoom Controller « Goose’s Tech Blog. I think this is a fitting way to start my new blog. 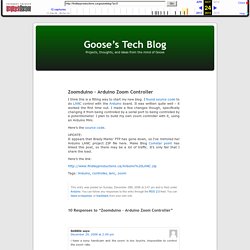 I found source code to do LANC control with the Arduino board. It was written quite well – it worked the first time out. I made a few changes though, specifically changing it from being controlled by a serial port to being controlled by a potentiometer. I plan to build my own zoom controller with it, using an Arduino Mini. Here’s the source code. UPDATE: It appears that Brady Marks’ FTP has gone down, so I’ve mirrored her Arduino LANC project ZIP file here. Here’s the link: Furiousgreencloud: Update - Arduino LANC - Version 02. LANC Compatible Camcorders. LANC/Remote Compatible Camcorders (for Electronic AquaCam Housings) LANC is a wired remote communication interface developed by the Sony Corporation and is found primarily on Sony camcorders and some Canon camcorders. 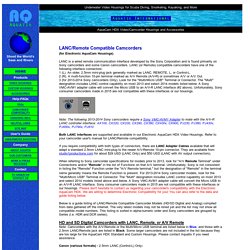 LANC (or Remote) compatible camcorders have one of the following interface connectors: 1 (L). An older, 2.5mm mini-plug jack generally marked as LANC, REMOTE, L, or Control-L. 2 (R). A multi-function 10-pin terminal marked as A/V Remote (A/V-R) or sometimes A/V or A/V Out. 3 (for 2013-2014 Sony camcorders Only). Look for the "Multi/Micro USB" Terminal or Connector. The "Multi" designation includes LANC control capability on most 2013 and select 2014 models listed below. The SONY LANC protocol. Remote Controlled Video & Photography. The CAMremote-2A (CR-2A) is highly integrated miniature remote control device for cameras and camcorders. 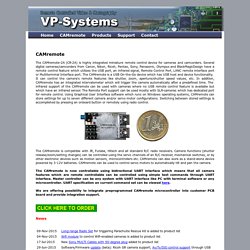 Several digital cameras/camcorders from Canon, Nikon, Ricoh, Pentax, Sony, Panasonic, Olympus and BlackMagicDesign have a remote control feature which utilizes the USB port, an infrared signal, Remote Control Port, LANC remote interface port or Multiterminal Interface port. The CAMremote is a USB On-the-Go device which has USB host and device functionality. It can control the camera's remote features like shutter, zoom, aperture/shutter speed values, etc. In addition, CAMremote has an integrated intervalometer which will trigger the camera automatically after a predefined time. The infrared support of the CAMremote can be used with cameras where no USB remote control feature is available but which have an infrared sensor. The CAMremote is compatible with JR, Futaba, Hitech and all standard R/C radio receivers.